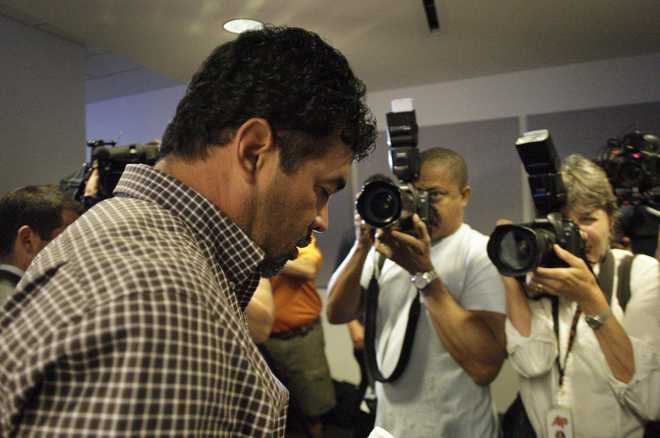 A fundamental tenet of communication theory is that because the purpose of communication is to transmit information, it is irreversible. There are no “take-backs.” Apologies for verbal or written foul-ups are hollow. Once it’s out there, it’s out there. We live in an era right now where companies and universities are doing background checks on prospective employees and students by scouring Facebook profiles, Twitter feeds and other social media activity. A regular person has nowhere to hide. Public figures are under much greater scrutiny.

Not that he has ever hidden. He is no stranger to opening his mouth, inserting his foot, and still managing to demonstrate the capability to land in trouble. His latest misstep earned him a team-levied five-game suspension. The blogosphere and conservative baseball media population exploded. The first four words of Sean Gregory’s profile in Time Magazine are Guillen’s damning quote: “I love Fidel Castro.” He would go on to say he respected Castro’s survival skills, and that‘s what he loved about Castro. Communication is irreversible. No way to talk around that.

Guillen manned up. He didn’t put out a statement. He was contrite, apologizing to the Marlins and to the Cuban-American community that has helped make Miami the multicultural center it has become.

The aftermath and the analysis has been a series of contradictions. A combination of liberal versus conservative and wanting to have it both ways. The same people that in the past who have called Guillen “refreshing” for speaking unfiltered and disregarding the art of saying nothing, are now condemning him. Steven Goldman expresses his libertarian view at Bleacher Report:

…Those who are standing on the sidelines sniping and calling for suspensions and termination need to consider their own motives. Moral outrage is cheap when the target has been so spectacularly, in Guillen’s words, “dumb.” This is shooting Marlins in a barrel. It’s much harder to stake a stand on an issue that is in the grey zone, when others might snipe back at you.

Let us be clear: There is a difference between suggesting the Marlins needed to suspend Guillen to appease the Cuban-American community and another to argue that the quality of his remarks themselves deserved suspension. The former is what political bloggers call “concern trolling,” posing as a helpful pal of some third party that really doesn’t need your advice, thanks. The latter is, first, un-American, not in terms of the Bill of Rights—this is not a First Amendment matter given that your employer can censor you in the workplace all they want—but that any call that encourages punishment for speaking one’s mind, no matter how offensive, should be antithetical to our very being.

Ken Rosenthal may have been one of those Goldman observed “standing on the sidelines sniping.” Monday, in his FOX Sports column, Rosenthal called for the Marlins to suspend Guillen. He wrote:

Not because a protest group wants him out.

Because it’s the right thing to do.

There is outrage in Miami. There is outrage among the Latino community, not just the Cuban-American population in Miami. The juxtaposition of Guillen’s comments with the opening of the Marlins’ new stadium in Little Havana has much to do with that. Dave Zirin notes this in his latest piece at Edge of Sports.

Loria desperately needed a hot start for his team and some sugary sweet media coverage for his new ballpark. Then his new manager Ozzie Guillen decided to share his views about Cuba and Fidel Castro. … This issue is…now about whether the ire produced by Guillen’s words will be directed against Loria, his grab of public funds, and the entire Miami baseball operation. If that happens, this issue won’t die, but the Marlins might.

Keith Olbermann, speaking as a guest on Dan Patrick’s radio show, said that sports provide a forum for us, the public, to address sensitive social issues. That “sports are well ahead of the rest of society on these issues.”

The blog Platoon Advantage would beg to differ.

…It’s certainly understandable why the Marlins felt like they needed to react.

Though they didn’t feel the need to respond when team president David Samson called the people of Miami stupid. …There are dozens and dozens of equally or more foolish and offensive things done by Major League players, managers, coaches, front office types, and officials every year. And these offenses don’t get investigated by the Commissioner. These offenses don’t earn team-levied suspensions. These offenses don’t get noticed at all, despite the real damage they do to the communities where they happen. If we’re going to have such a low standard so as to punish Guillen for making a bad joke (make no mistake, there’s no way to honestly construe what Guillen said as a statement of support for Castro, his tactics, or his regime), where are the suspensions for everyone else who makes baseball look bad?

What can we learn from all the coverage? We know Guillen’s comments were wrongheaded on many levels. We know those comments will be available forever. We know that there is heavy criticism, much of it founded, much of it personal. We know that all of it is irreversible. And yet again, we learn that no matter how hard the general sports fan wishes politics and sports to be separated, they are inextricably linked.

Well done. This whole issue is troubling for so many reasons. The Banter guideline prevent me from expressing my full opinion here, so I'll just say that I agree with Zirin. The public funding fiasco is much more important and hopefully will be addressed.

Also wish all the moral outrage by baseball commentators on this matter would be directed to all the drunk driving offenses by ballplayers. Surely this is much more serious than one manager's random remark about Fidel Castro?

The same people that in the past who have called Guillen “refreshing” for speaking unfiltered and disregarding the art of saying nothing, are now condemning him.

Yeah, that's one of the really sickening things about the general reaction, I agree.

Anyway, those things piss me off more than Ozzie saying he loves Castro.

As usual, Joe Sheehan hit the nail right on the head in his e-mail newsletter: "Let's be clear about why Guillen is taking a five-game suspension from his employers: because he may have cost them money, and suspending him was the easiest way in which they could minimize the losses. This is an economic decision that has nothing at all to do with Cuba, Fidel Castro or Ozzie Guillen's long history of being opinionated. This is public relations, not politics. This is the Marlins, at a critical moment in their history and desperately trying to win over a city they've bent over for years, making damned sure that they don't lose any of the momentum gained by their new ballpark or waste the hundreds of millions of dollars they committed in finding players to romp around in it."

Joe goes on to point out that Josh Leuke and the players who get DUIs or beat their spouses don't actually affect the bottom line of their team. Guillen's remarks about Castro when he's the manager of a team whose shiny new stadium is in a city with a massive Cuban population do. That's the only reason why he's being suspended right now because, as he puts it later in the newsletter, the Marlins love money.

Great summary of the different reactions, but I really think this is issue is so much simpler than all that. The bottom line is the Cuban American community makes up a big portion of the Marlins customer base, so having a key team representative say something that is offensive to them deserves a response. If Guillen said the same thing as manager of the White Sox (and, a few years back, he did), no one would care. The reason it's a big issue is because the Marlins are fighting to build a fan base in Miami, and events like this distract from that goal.

I also think Goldman is way off base. How is advocating Guillen's firing "un-American"", regardless of the reason? The beauty of America is Guillen is free to speak his mind and then everyone else is free to react. However, just because that freedom gives us the right to speak without fear of legal ramifications doesn't mean there aren't consequences. Guillen shouldn't be any more free to express his opinion than those who disagree with it. Goldman's implication that it is un-American to speak out against others who speak out is, well, un-American, at least using his logic.

Ozzie is all over the map, he's both praised and condemned Hugo Chavez, to the point I don't have any clear idea what his politics are, whether he's an individual liberty loving capitalist or a marxist of some stripe (fascist, socialist or communist). Now, you can have an enemy and still respect them. It happens in war all the time. Is Ozzie respecting Castro's ability to be tenacious and hold on to power, while disagreeing with him? Possibly. I'm not going to read the Time article because, quite frankly, Time is no longer worth my time. Hey, aren't we all glad that the Yankees were tenacious enough to pull out a win last night? Admiring a good trait in your opponent isn't wrong.

If Ozzie had been the manager of 29 other teams, this wouldn't even be an issue. As, as I've read, he's lived in Miami during the off season the last 12 years, Ozzie is guilty of being utterly clueless.

It reminded me of when Jesse Jackson called New York City "Hymietown." Not so slick. Then again, nobody has ever accused Ozzie of being shrewd.

Ozzie should comeback from his suspension wearing a Che Guevara shirt.

Ozzie could be a character Dave Chappelle's "When keeping it real goes wrong" skit.

I'm late to this, and maybe no one will see it, but I think it's important point to make.

Craig Calcaterra has it right: Peter Angelos did far worse than this in 1999 when the Orioles played the Cuban national team. What repercussions did he suffer from MLB? None. Of course, the Orioles did nothing to him, because he's the boss.

How much outrage was there in the baseball media? I don't remember any, but I might not have been paying attention.