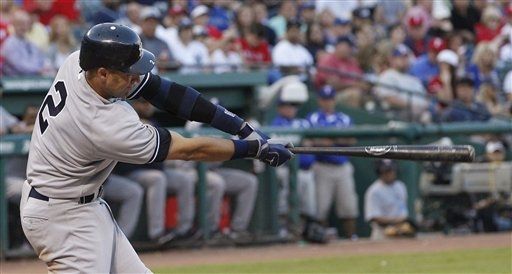 You’ll have to excuse me if I don’t believe in the Texas Rangers. I know they’re good, and not just because they represented the American League in the World Series in each of the past two seasons. So far this year they’ve been the clear class of the league, winning thirteen of their first sixteen games, and they’ve been led by several players off to phenomenal starts. Ian Kinsler was leading the league in runs scored, Michael Young was hitting .403, Mike Napoli had an OPS of 1.041, and then there was Josh Hamilton. The Hammer finished his first sixteen games with league-bests in each of these categories: seven home runs, .776 slugging percentage, and an otherworldly OPS of 1.214.

So yes, the Rangers are good, but there’s still a huge part of my consciousness that refuses to believe it, that only remembers them as the appetizers that were served up year after year as the Yankees were winning championships in the late 90s. And as if to solidify that image in my mind, the Rangers trotted out the retiring Iván Rodríguez to throw out the first pitch (and the first throw down to second base). It seemed like 1998 all over again.

That theme continued as soon as the game got underway and Derek Jeter singled on an infield grounder that Kinsler couldn’t quite corral. After Robinson Canó singled and Alex Rodríguez walked to load the bases, Curtis Granderson blooped a single into short center field to score two runs and give the Yankees and C.C. Sabathia a 2-0 lead.

In the home half of the inning, though, the Rangers looked poised to do more than just answer back. Kinsler opened with a single, then Elvis Andrus pushed him around to third with a single of his own, bringing Hamilton to bat with no one out. So far this year Sabathia hasn’t been as dominant as we’ve gotten used to seeing him, and one of his biggest problems has been an inability to make the pitch in a game’s crucial moment. Even though he held a two-run lead and his teammates had twenty-four more outs to score him some more runs, this felt like a moment.

Sabathia looped a lazy slider (or was it a curve?) clocking at just 78 MPH towards Hamilton, up above the belt but in enough that Hamilton couldn’t get any good wood on the pitch. He rolled the ball out to Canó at second who started an unorthodox 4-3-6 double play. Kinsler scored from third, but it was a win for Sabathia. He had made his pitch.

Building on that momentum, Sabathia cruised the next four innings, yielding just two hits while striking out seven, including all three hitters in the fifth.

Meanwhile, the Yankee hitters were padding their lead. Back-up catcher Chris Stewart started the fifth inning with a walk, moved to second on an error, to third on Jeter’s third hit of the game, and finally home on a Nick Swisher sacrifice fly. Two batters later with two men on, Rodríguez picked an opportune time to notch his first hit off a left-hander all season long as he launched a bomb over the fence in straight away center field for a three-run homer and a 6-1 Yankee lead. (Interestingly enough, it also more than doubled the previous RBI output for Yankee cleanup hitters.)

In the top of the sixth Mr. Jeter struck again, this time with a rocketed double off the wall in right center field to score Stewart with the team’s seventh run. A quick word about Jeter. The man who was essentially left for dead last June is currently leading all of baseball with 30 hits and slashing .411/.436/.644. Suddenly the talk is less about retirement and more about Pete Rose. While it still might be a stretch to imagine Jeter playing shortstop for the seven years it would take for him to get to forty-two-fifty-six, it’s clear he’s got a lot of hits left in him. He currently sits eighteenth all-time with 3,118 hits, but by the end of next season he will probably have edged past Carl Yastrzemski and vaulted all the way into sixth place.

Sabathia ran into a bit of trouble as the game progressed, yielding a majestic solo home run to Hamilton in the sixth and then a two-run double to Craig Gentry in the seventh, but he recovered to work a five-pitch eighth inning before handing the ball over to the Great One for the ninth. Just like that, the game was over.

The Sox had a rare comeback win. And Aceves got a save! Ace save face? Ace save us? I guess it depends on your accent.

Truly looking forward to the decade long compilation of "Jeter's Done" articles. Had a blast reading the foolishness of the perennial Mo naysayers in that recent feature.