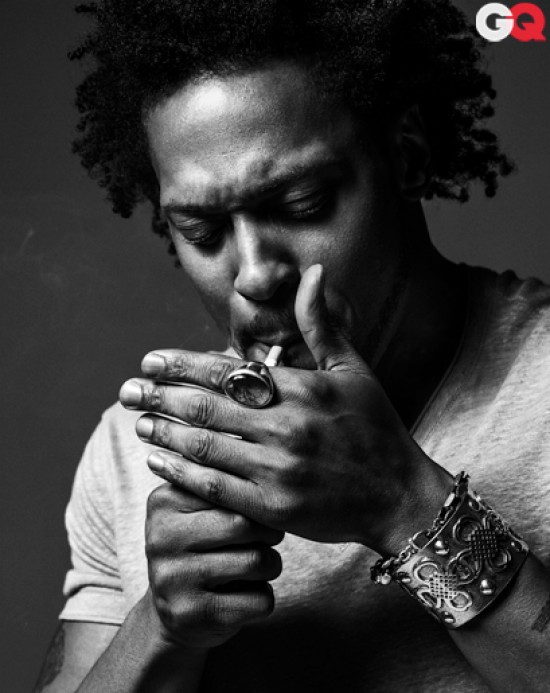 I was the assistant film editor on a forgettable gangster movie called “Belly.” It featured Nas and DMX and was directed by Hype (aka Harold) Williams. D’Angelo came in to watch a screening once at 1600 Broadway. He and a few pals excused themselves to smoke L’s in the stairway while the projectionist threaded the movie.

D’Angelo was a big deal at the time. Then he fell off. Check out this profile of the gifted singer by Amy Wallace over at GQ:

Shame, guilt, repentance—D’Angelo knows them well. To say that he was raised religious doesn’t begin to capture it. He’s the son and the grandson of Pentecostal preachers. To D’Angelo, good and evil are not abstract concepts but tangible forces he reckons with every day. In his life and in his music, he has always felt the tension between the sacred and the profane, the darkness and the light.

“You know what they say about Lucifer, right, before he was cast out?” D’Angelo asks me now. “Every angel has their specialty, and his was praise. They say that he could play every instrument with one finger and that the music was just awesome. And he was exceptionally beautiful, Lucifer—as an angel, he was.”

But after he descended into hell, Lucifer was fearsome, he tells me. “There’s forces that are going on that I don’t think a lot of motherfuckers that make music today are aware of,” he says. “It’s deep. I’ve felt it. I’ve felt other forces pulling at me.” He stubs out his cigarette and leans toward me, taking my hand. “This is a very powerful medium that we are involved in,” he says gravely. “I learned at an early age that what we were doing in the choir was just as important as the preacher. It was a ministry in itself. We could stir the pot, you know? The stage is our pulpit, and you can use all of that energy and that music and the lights and the colors and the sound. But you know, you’ve got to be careful.”

You didn't have to work on it with those jackasses, man. I haven't seen it since I worked on it. Really? Was it any good? My memory says it was schlock of the first order. Maybe I'm still bitter about having to physically mark-up all those long dissolves (this is back when we still conformed a 35mm print).

In all seriousness it's not good at all. But it's a complete trainwreck of the first order, one of those things that has to be seen to be believed. Nas and T-Boz as the romantic leads, that alone...

But "so bad it's amazing?" Yeah there's definitely some of that.

I remember DMX showing up at a screening in the Technicolor building with a full bottle of Hennessy. It wasn't full by the time the movie was over.

I thought Belly wasn't that bad. I guess I was expecting it to be bad and it didn't live up (or down) to expectation. There were a couple cool shots, I think. But Nas, yeah - no.

I'm going to read this article now. I'm pretty up on the D'Angelo saga but I'm ready for more.

So hilarious, my film producing partner and I were just talking about this movie yesterday. I couldn't get past the halfway mark on this movie before I turned it off and blotted it out of my mind (it can never be unseen!) That was pretty much the end of Hype Williams as a rising director if I recall. I don't think anyone above the line came away unscathed from that garbage. Sorry Alex that you had to go through that.

But if it makes you feel any better, my first feature gig as a PA was "Order of Redemption" which probably makes Belly look like a Golden Globe winner. Tom Berenger, Armand Assante and Busta Rhymes... Need I say more?