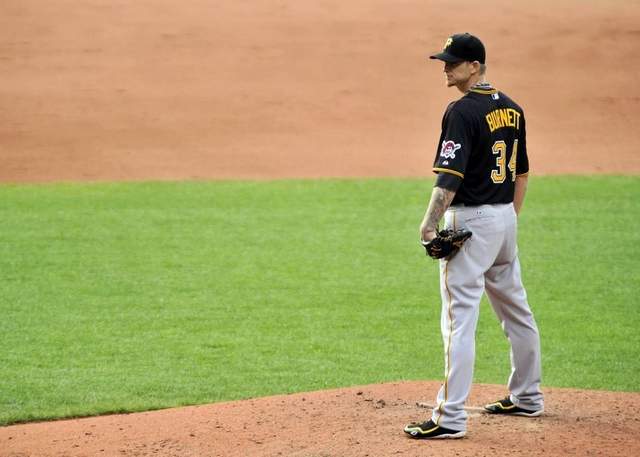 Johnette Howard has a piece on A.J. Burnett over at ESPN:

When a New York Daily News reporter passed through Pittsburgh in late May and checked in with him, Burnett volunteered a telltale story. He spoke about how in the first inning of his home debut as a Pirate, he coughed up a walk, a single and another walk to the very first three batters he faced. Oh no.

“I could imagine what that place [Yankee Stadium] would sound like,” Burnett said. “But there was about two words that came out of the crowd here. So it’s just different.

“You’re a little less on edge. Some guys thrive in that.”

I’m pleased for Burnett. He seemed like a guy that wasn’t cut out for pitching in New York. If that was the case, it’s nice to see him flourish in Pittsburgh.

Agreed. I'm not surprized at all that he's doing well in Pittsburgh, and I'm glad to see it.

I am catching the Tigers in Pittsburgh next Saturday w/ our new resident Pirates fan. One day off of AJ's turn in the rotation I think. I hope there is a rainout and he slides to us.

That's a fun park. My only complaint is that they didn't have Stargell t-shirts. I bought a Clemente shirt, which is plenty cool, but I was jonsin' for a Wilbur joint.

I will be on the lookout for a Stragell for you Al. We're a McCuthcen household, so that'll be an easy get.

Speaking of McCutchen, he's an all-star right? No way he doesn't make the squad? I already started telling Jude about the All Star Game and promised he could stay up until McCutchen batted, but now I'm worried they NL will screw it up.

Man I'm loving PNC park. I walk-up and get tix for cheap, fun place to watch a game. I feel like the Pirates are becoming my second favorite team, I love me some McCutchen.

[4] Jon, this is exactly why I believe that no matter how unwieldy it might get, there has to be at least one all-star from every team. In fact, if it makes things easier I'd rather they put a cap on each team -- maybe four. I remember those dark days when Mattingly was the only Yankee, and how important his at bats were to me. Your boy deserves to see McCutcheon in the All Star Game.