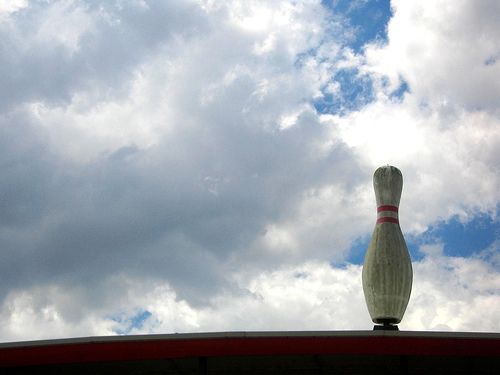 Here’s another bowling story. This one, by the late Jeff Felshman, is a keeper, a funny and understated gem:

Only the dead don’t bowl. Everybody’s tried it, anybody can do it, nobody wants to see it. Would you pay to watch bowling? Of course not. Not if the match featured the greatest bowlers of all time. Who are the greatest bowlers of all time? Who knows? As a spectator sport, bowling isn’t much. Most bowlers don’t pay much attention to their own game much less anyone else’s, especially after a couple of beers. That’s the downside of bowling’s great accessibility: even when you’re good at it, nobody cares.

Most of the bowlers at Timber Lanes the first Saturday in June don’t watch; most of them can’t see. It’s the last day before the summer break for the blind bowling league from the Chicago Braille Center. They won’t be getting together again until the middle of August. By then they should know if they’ve repeated as national champions of the American Blind Bowling Association. The results from this year’s tournement (which was held over Memorial Day weekend in Atlanta, and drew about 700 bowlers from 170 blind bowling leagues) won’t be tabulated until August. The league secretary, Virginia Okada, doesn’t think Chicago Braille Center won this year; but until they hear otherwise they’re still the national champs.

A sign on the door says Timber Lanes welcomes seeing eye dogs, but no one brought the dog today. The group is large enough as it is, about 40 being a crowd in the small bowling alley on Irving Park Road. There’s someone here from practically every American group–that’s–black, white, Spanish, American Indian, Asian, old, young, middle-aged. Usually in America when people try to put together such a broad-based racial and ethnic coalition they fail, but the blind bowlers not only can’t see much difference they have a common cause: they’re all trying to stay out of the gutter.

Caption reminded me of one of the greatest supergroups!