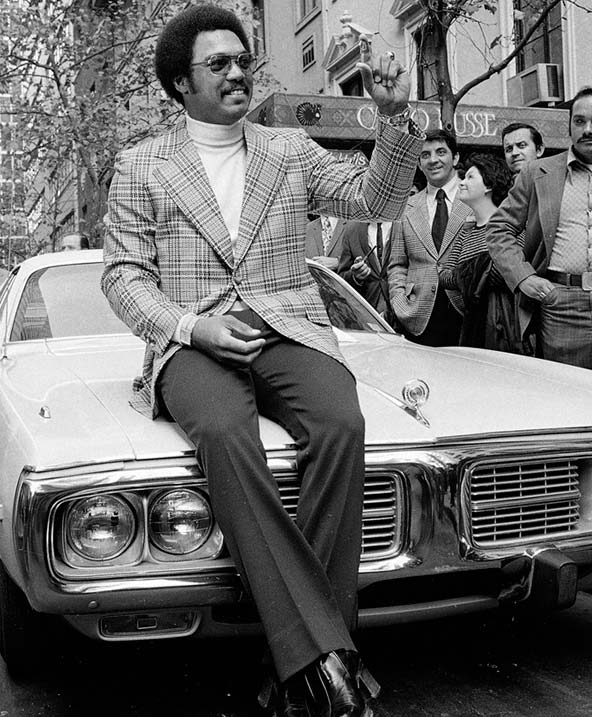 Reggie’s in the penalty box.

Here’s Phil Taylor’s story from last week’s SI…If Reggie had gone straight the police, none of this would have ever happened.

those straws with the little split in it is infuriating.

Everyone is just so sensitive. LOL.

Reggie like the Plymouth he's sitting on in the picture are now both orphan brands. But you know what...did he say anything that a lot of people feel is true? Yes. Did he utter any lies? No.

Reggie is one of the dickiest, and I'm sure Thurman and Billy are laughing in their graves right now. For a moment of self importance he endangered his old age place of comfort. I don't feel badly for him as there is no excuse for dumping on your place of employment in the press.

But on the other hand, did he say what a lot of people believe...

[3] Well, he said that if A-Rod gets into the Hall, no Hall of Famers will attend the ceremony. That's patently absurd. I don't say it's a lie, since Reggie is quite capable of believing absurd things (he's better at it when the things involve himself, though).

Yeah and speaking of dicks, Thurman and Billy were first class in that category.

On reading Phil Taylor's story: Any time Reggie starts talking about God, I remember a piece of film from the late '70s. Wish I had time to find a link. It must be somewhere.

Two cameras were on Reggie at once - a TV camera with bright lights and a less obtrusive film camera. To the TV crew, he spent a few minutes going on about how much he owed it all to his savior. Then the TV camera went away. The other camera caught him telling someone, "Yeah, I talk that shit real good. They eat it up." (I paraphrase).

this is the sort of thing that in his prime gave Reggie his reputation, for better or worse. Brash, cocky, tells-it-like-it-is...whatever cliche you want to use.

But when you keep doing it 25 years after you last picked up a bat, it just comes off as kinda petty and sad. Same goes for him bitching about Billy to anyone who is willing to listen.

Billy and Reggie had a bad relationship, we all know that. And we all know Billy takes his share of the blame for that. But for the love of God, the man was an emotionally disturbed alcoholic who's been dead for 22 years. Let it go, already.

Of the three--Jackson, Martin, and Munson--Thurman was in a different class. Yes, he could be brutal to the media, but he was beloved in that clubhouse, revered by the fans, and was a great family man.

[8] I'm biased with my Reggie love I know, but Munson doesn't come off so well a lot of accounts..surly, angry dude who constantly complained about his contract.

Munson was also made promises that Steinbrenner did not live up to, with regard to Munson being one of the highest paid Yankees. And a lot of Munson's later complaints had to do with a desire to be closer to his family in Cleveland.

I pretty much think most of those guys -- A-Rod, Bonds, etc. -- should be in the Hall of Fame, but aside from that quibble I don't really have a problem with what Reggie's saying, and I GUARANTEE there are people in the Yankee front office who think the same thing. You can say that they should have known, but the bottom line is this: they shelled out for a ridiculous ten-year contract, then found out about the steroids. (Unless we believe the story told about Cashman watching A-Rod in the playoffs, against Detroit, I believe, and yelling at the monitor: "Whatever you were on before, get back on it!")

Someone needs to say something about A-Rod. Even if he somehow maintains his current level of production, he won't come close to living up to his salary over the next FIVE YEARS. The Yankees are upset because Reggie's comments possibly undermine the potential goldmine as A-Rod approaches 762, but they should be more concerned about the fact that he currently has the 7th highest OPS on the team, 8th if we count DeWayne Wise.

SOMEONE needs to say SOMETHING.

Reading the whole article..the comments were really rather tame. His views on Gary Carter and Bert Blyleven were much worse!

[11] FIVE MORE YEARS! FIVE MORE YEARS! Arod will be less popular than a second term lame duck president. As discussed here before, it's going to be miserable for him and the Yankee fans, once it dawns on the majority that there isn't one, two or three years of legacy years of mediocrity, but FIVE YEARS.

I heard an opinion on the radio this morning that excoriated the Yankee players for being angry at what Reggie said, and possibly influencing the reaction and punishment the team levied against Reggie. "This is not Little League", the former jock/radio host said before I turned it off, with the implication ringing in my head: the players were being oversensitive and reactionary to an issue that in his opinion should have been dealt with by a Reggie simply apologizing to Rodriguez in public and in person and moving on. By punishing him, he argued before I tuned him out, the Yankees were basically exacerbating an issue that would have otherwise quickly gone away. Instead, now it becomes a fan issue that won't go away.

I would argue that this became a fan issue the moment the remarks were published, and would have gone away had not other media outlets jumped on it and relentlessly pushed it to the forefront in order feed the insatiable need to bleed as many dollars out of controversy as possible. I am increasingly frustrated by how less informed and more opinionated sports coverage has become, and the audacity of certain members of the media to shield themselves by saying "the fans talk about it and want to hear it." The fans always talk about controversial things, just not to the extent that the media does and insists on feeding to the public.

Let me say this: SI is not responsible for what Reggie said or people's reaction to it. They were handed a money-making opportunity and they cashed in, which is fine. But... as I said above, stop being
disingenuous. The very thing the uninformed radiohead complained about is exactly what his company does and will continue to do until no more revenue can be had from it: blowing up what could have been an issue with a quick and quiet resolution into a major and possibly divisive controversy and extending it beyond it's time of importance, and in doing so creating more strife than the people directly involved want or need to deal with. THAT'S what they were angry about. Reggie, for all of the news and controversy he has developed and endured, should have known better and now the whole organization has to deal with the relentless, overzealous media reaction to it.

Reggie's lucky he still has a job, honestly. He tripped out more than just the Yankees with that, and the Yanks were appropriately embarrassed to even have him around for the time being. As much as you may agree with his assessments with current HoFers, here and unfortunately not, it was purely in bad taste and unbecoming of a HoFer to discuss that so publicly, especially since there is no forum for the deceased to defend themselves from his comments, never mind the blindsiding he gave the other ones he mentioned. They and their families have to deal with the resulting idiocy from that as well. I doubt any other team would even consider giving him a position in their organization, never mind one with as high of a profile as the one he has now, based on that lapse of judgement alone (never mind his record... and I LIKE Reggie!) The Yankees handled this with unusual tact in my opinion. It will blow over eventually as all things do, but it left an unfortunate and unnecessary stain that likely won't go away soon unless the team comes out winning, and winning like crazy. Sheesh...

I don't know when it comes down to it I don't see what was so outrageous in what Reggie said about Alex. And I do think ballplayers are hypersensitive in general.

13) You are assuming it hasn't dawned on most of them. And Alex is already a guy who has had many detractors among Yankee fans. I think it's us who like and appreciate him that are in the minority.

He's not going to fade gracefully. The Yanks made a dumb move with this contract. And this horse will be beat to death, hell, it already has, until Alex hangs 'em up.

I also think that Alex needs to get a grip if he was hurt by what Reggie said.

[16] I doubt he was really hurt by it; if he said it to Reggie, he had to know Reggie would run his mouth someday. But you gotta also figure Alex was put on the spot; what can he honestly say say? Even his jokes are construed as White House statements about the economy.

I think if it were me, I might react badly immediately to the fact that someone blabbed my private conversation to the press, but given a moment of reflection I can't really be mad at anyone but myself. I'd probably not talk too much around that person anymore if it were something I felt sensitive about, but then I'd know what to expect going forward and leave it at that.

Reggie was right about Alex, but he should not have said it in an interview. The Yankee organization was within its right to suspend him temporarily. I actually find Reggie's opinion that Marvin Miller does not belong in the Hall of Fame far more infuriating.

In general, I am sick of the negative attitudes towards the baseball players with links to steroids. The baseball writers felt was okay to irrationally hate on Bonds because Alex was going to the "pure" home run king, only for them to be hoisted on their own petard when it came out that Alex used as well. All these self-righteous hypocrites need to suck it up and put all these guys in the Hall when they belong.