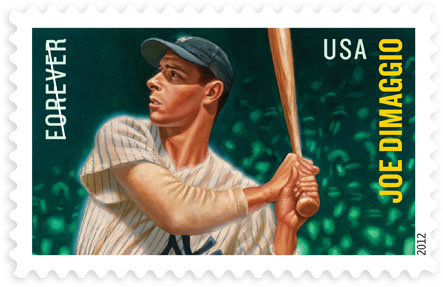 At this point, it must have seemed like DiMaggio’s streak would keep going forever. Forever comes just one day at a time, and on this day DiMaggio kept the streak going. The Yankees opened up a four-game lead as they beat the Browns, 6-2, for their eleventh straight win. Once again, DiMaggio singled in the first inning to reach fifty in a row, but he was far from done. He would single twice more and then finish his day by smashing his league-leading twentieth home run in the ninth inning. He was 4 for 5 on the day, which brought his average up to .365, still far short of Ted Williams. The Boston slugger had been slumping of late, and his average had dipped all the way down to .398. As history tells us, he’d recover.

How were batting averages so much higher then? I know Joe never struck out, but his BABIP was also phenomenal.

Oh, and I shouldn't get all excited about this, right?

[1] Getting at the answer lies, I think, in looking at OBP, excepting freaks like Ted Williams and Babe Ruth. Were OBPs generally higher? i suspect not. Rather, I suspect that hitting philosophy was greatly different from today, with more emphasis placed on BA and contact and not striking out, and less emphasis placed on walks. At the same time, I suspect that pitchers tended to pitch much more to contact. So my guess is that overall, the best hitters tended to be those with high averages, while overall the average OBP was probably not much different from today.

Williams stands out, of course, but he was really an outlier. But compare that to some recent random year. I'll pick 2009 before looking:

without a Williams or Ruth or Bonds, the more recent top ten OBP are more or less in line, indeed perhaps a shade higher, yet the top BAs today tend to be lower. The entire approach to hitting and pitching has evolved. In the old days, hits were simply more valued, I think.

Actually, looking over the numbers, the average OBP of the top ten, minus Williams, appears to be a bit lower.