< Game Over      You Probably Can’t Spell Boogie Down or Productions >

Babe Ruth and the Banyan Tree

There’s one thing you should know about the Banter–we spare no expense in the pursuit of a story, and we are never truly on vacation.

So even as my family and I have been enjoying the tropical breezes, idyllic pace, and pristine beaches of Hawaii this week, I’ve kept my nose to the ground the entire time, searching for a story. I found one on Day One. 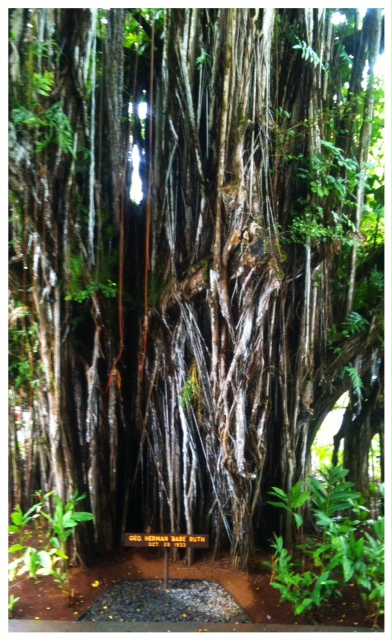 Directly outside our hotel on the Hilo side of the Big Island, stood an enormous banyan tree marked with a simple sign, “Geo. Herman “Babe” Ruth, Oct. 29, 1933″. After some serious reporting (a five-second conversation with the concierge), I procured a pamphlet which described the evolution of Banyan Drive. Back in 1933 someone decided it might be a fun idea to have celebrities and local luminaries plant banyan trees along a stretch of road that curved around an inlet of the Pacific Ocean. The Babe was on a barnstorming tour, so he was a natural pick, as was Cecil B. DeMille, who was in town filming a movie.

Banyan trees appear as if they’ve been imported directly the planet Dagobah. They begin as a tree with a single trunk, but as they mature, the branches drop long tendrils which twist downward until they find the ground and take root, eventually thickening to the point where it becomes difficult to identify the original trunk. Mature trees have hundreds of separate trunks encompassing hundreds of square feet.

I took my daughter Alison down to the tree on the morning we left to take a few pictures. Before we left I asked her to put her hand next to mine on the outermost root. It was rough and full of history.

“Can you feel it?” I asked. “Babe Ruth planted this tree. Babe Ruth.”

super cool! thanks for sharing and enjoy your family vacation!!!

"That's gold, Jerry! Gold!" (Bania quote for the Banyan story)
Awesome find. I sure would like to get to Hawaii some day. Enjoy!

i feel like we should call up Russell Branyan for this series!

I've never heard of Banyan trees before - what an amazing story, Hank! Thanks for passing it on to the rest of us. Hope you and the family enjoyed your time in Hawaii!