Here’s a little honey from our man.

“Fore Play: A Celebration of Golf the Glorious” 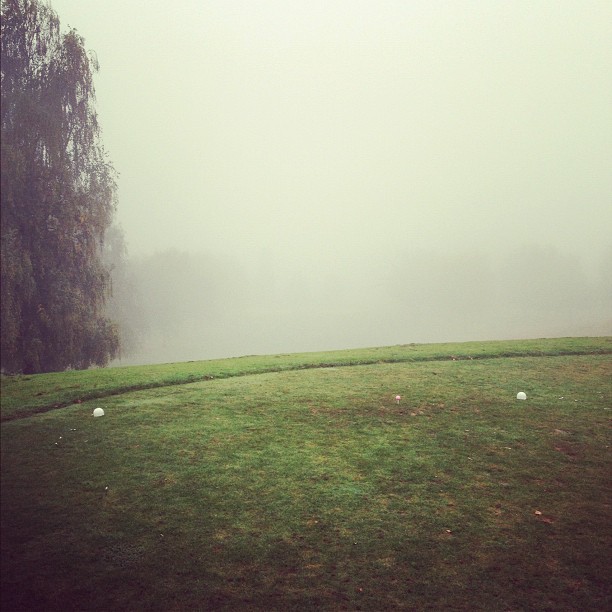 I play golf, I recommend golf, I celebrate golf—for the exercise. For this I am roundly derided by friends. God knows what my enemies say. But they don’t understand. The exercise has nothing to do with getting winded, making the heart bump-a-whump for twenty minutes, or releasing amino-ketones (or whatever bodily chemical is this month’s Cosmo health trend). I do not mean to join in the national beatification of sweat.

Golf is exercise of the spirit, the trimming away of lumps and rolls that distend the successful psyche. We all have ways of jamming ourselves into contortions that the world rewards: the best lawyer I know has to build up a hard knot of rage at some injustice that threatens his client. I know a woman who cannot entertain without subjecting herself, her home and family, to such ferocious primping that she winds up a total wreck. But her parties are lovely. The point is there are many useful twists of persona, but things unnaturally bent grow brittle if they’re never snapped back into shape. And golf untwists. It’s more than the sun and air, stretching and flexing the body. For those corporeal joys, why not try gardening?

Golf is bodily, sort of. The swing, as anyone who has tried it knows, is such a demanding blend of physics and physicality that any of a hundred different muscles or movements can be cited as the latest cause of failure. But the essence of the game, and the locus of its experience, lies somewhere between the body and the mind, or in their fusion—not in the precision of latinate names with which we label musculature but in that murkier realm where words, if there be any useful words, must come from oriental tongues.

This stems from the nature of the contest: golf may be played with a partner or against an opponent, but the real and relentless competition is the self. Any golfer, even the worst, knows basically what to do: there is the ball—hit it toward the hole. But every golfer, even the most experienced, plays always against the tendency toward deviation and lapse. We play against our own capacity to screw up, against the limit of our imperfection, against the proverbial essence of humanity: to err. It is a solitary struggle, and humbling, trying to make the body do. Strength, speed, or size—none of these will avail; only the gentle coaxing of grace. It cannot be forced. The concentration is yogic.

Compare golf for a moment with some other sports: there are no bulked-up defenders trying to block the next shot. No faster player will thunder up to tackle us on the fairway. There is none of the fishy luck of the angler who can walk away from failure with a shrug and an easy alibi: “They just weren’t biting, today.” And none of the competitive consolation (“That serve of yours is just too quick!”) that tennis allows. In the game of golf, no one hits the ball out of reach—no one but us.

To the extent that we succeed we triumph over self, and when we confront failure we have nowhere to look but within. That accounts for the endless fretting, the golfer’s morose self-absorption. Of course the scoffers, the jokesters, see only the overt unhappiness (a “good walk spoiled,” Mark Twain called the game). And I concede one may not see right away the straight-line links from Aristotle and Aquinas to that overweight accountant speaking foul words as he slams the 3-iron back into his bag and drives his sputtering gas cart over the moribund grass he has just uprooted with his latest errant swipe. But, I assure you, no theologian, no saint, has examined and condemned his own frailty with more sincerity. Yes, the golfer may be ungainly with his tools; yes, he seems wrapped up in his woe; yes, he may talk of it without cease . . . but what can we expect from a being who is wrestling with the mortal mystery, the meagerness of the human will? 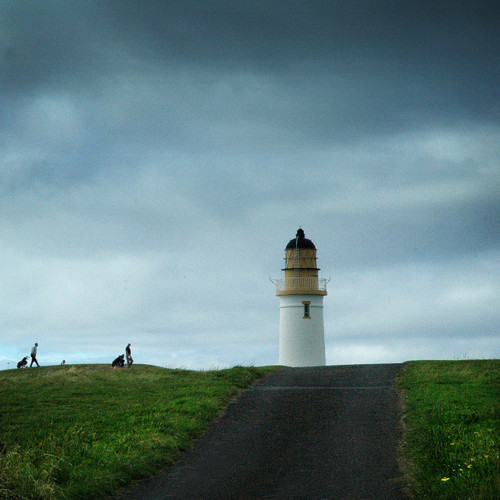 Then the miracle happens and something goes right (it always does, though, alas, too seldom). A long putt curves to the hole, slows, and . . . drops. A chip shot arches just over a vicious abyss of sand and . . . settles tractably on the green beyond. Or a drive leaves the tee . . . . Can those scoffers have felt even once such a tee shot? A miracle, nothing less. . . There is the ball: still, small, dimpled, damning our latest failures with an unsightly bruise or two, daring us to hit it again with all our might. Thwack! The driver connects with a glad clap of wood, and the ball is free of earth, aflight, ripping through the air under our fond eyes at a speed that makes a green blur of the ground; and now the ball, a shapely dart of white, rises fast, growing smaller, more perfect ever, as it climbs to its apogee, black now against a vault of blue sky, a speck of pure promise that seems to hang, holding hope aloft, as we hold our breath, until it settles, beautifully, white again, onto the velvet fairway, an eighth of a mile toward the hole.

A fine thing God has made for us! And the feeling it promotes is not one of chesty self-worth but wonder, awed pleasure: we are blessed. Of course, we cannot keep such joy for long. We lose the grace; all too soon we lapse. But oh, just to have had that moment, when we steadied the erring self and found within it the capacity to do right, to do perfectly! If it happens but once and the rest is dross, if we lose the match, if we score like bums, if it rains and our feet squish in our shoes . . . still, we spent a day with our self, and found its best. We exercised it. We are untwisted. 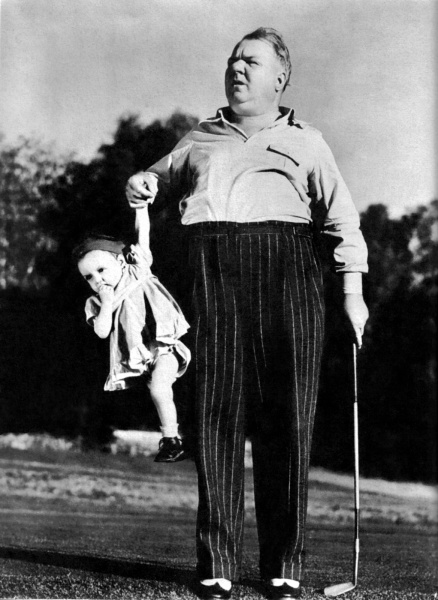 I remember a game last summer with my favorite partner, that ferocious hostess I spoke of before. I had to drag her out. She was facing a breakfast for forty—some cousin’s daughter was getting married—only three days hence…”Just nine holes!” I cajoled her. “You have to get some air. . . .”

She hit the first drive badly. She never bothers to warm up. She always thinks of it as stealing the time, and on the first tee, she still carries all her cares. That day she swung with forty guests on her back. I said: “Want to hit another?” But I knew the answer. “No. Come on,” and she grimly shouldered her little bag and stepped off the tee toward the rough and her ball.

I watched her sink deeper in new troubles through the first hole, then the second. I saw the fretful changes to her swing as she rifled her mental grab bag of tips, teachings, and keys to success: turn on the backswing, hands ahead on the downswing, club head open, club head closed. . . . She duffed two shots on the third hole, then swung so hard she almost fell. “What is it?” she finally cried in despair, as if she’d searched the whole universe for the cause of her troubles.

I mumbled a few truisms—elbow in, shift the weight, keep the head down—and then, as I recall, some of the incantatory stanza that form my personal mantra: “Let the club head do the work, make the swing a slow and beautiful dance….” 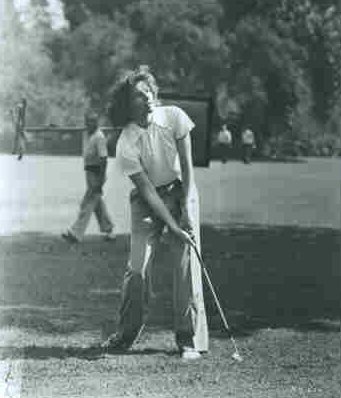 Who knows what she heard, if she heard anything at all. She was so downcast, alone with her million mistakes. But something cased within her and her club head drew back in a graceful arc, and thwack! She began to hit the ball, only straight at first, but then hard, and harder, and she stood on tiptoes to see the ball bounding, scurrying over the hills ahead. “Liked that one!” she said as she grabbed her bag and strode on. I caught up and stood behind her as she hit her next shot. She smacked the ball free of the earth, watched it fall and roll, and she turned with a grin. “Feel better?” I asked. She tilted her head up, shook her head, and cried “Oooohhh!” to heaven. She had no words sharp enough for the joy.

Of course, she lost it, too. Just a few holes on, she overswung and pulled her ball sharply to the left, where it settled in a trap. And that one shot broke the spell. She hit some good ones still. But the blessing was off her head. Now she berated herself loud, or clucked in disapproval as a chip shot skittered off the back of a green. But she was smiling at herself, too, mocking her mere humanness (when she knew the divine was in her!). She had only herself to blame, after all, so she had only herself on her mind. Not the weight of the world: she’d been freed of that.

I stood behind her again in her kitchen that evening. She was bent at the sink, polishing silver. It wasn’t the silver she’d serve with that Sunday. Those pieces sparkled already. This was the silver that molders in the breakfront. In case anybody bothered to look, you know. She was thinking of fish. Could she call in her order? Would they pick out the best? Clean them perfectly? No, she would go, pick them out herself. Have them filleted under her exacting eye. Then, back home, she’d clean them all again. Those little bones… Could she get away with buying mayonnaise?…

“How was the golf?” It was her husband coming home. He walked in the back door and casually tossed off the question by way of hello. He didn’t mean much, just, How was your day?

But as she turned, all tightness at her eyes disappeared, her hands unclenched from a polish-smeared bowl, and her smile was of another world, a smile of the Sufis, of the saintly, of the saved. 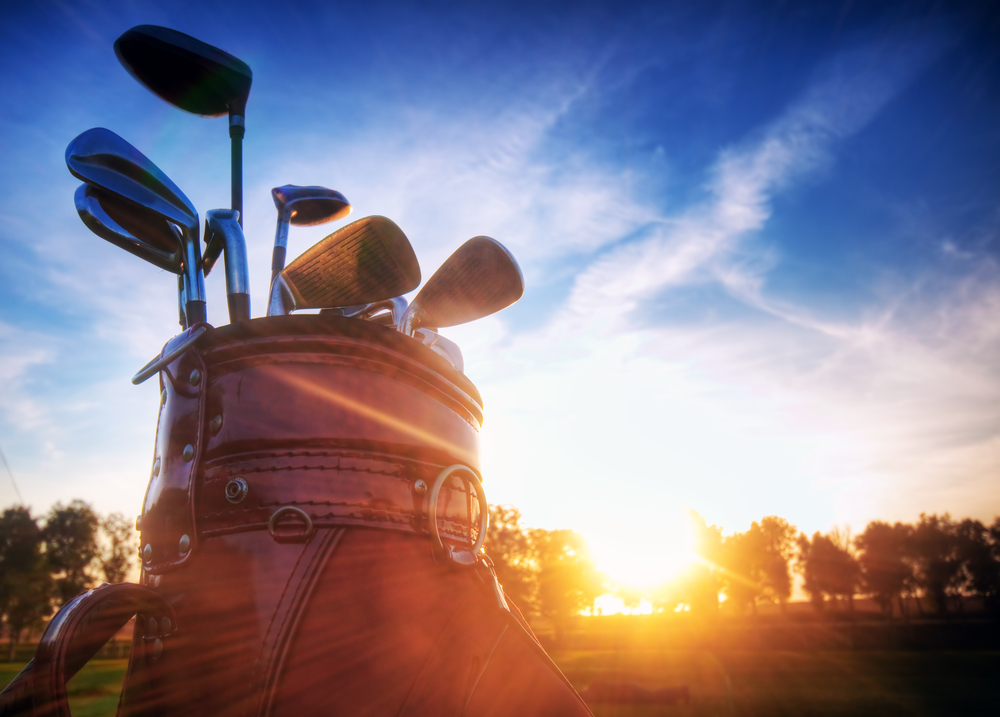 Originally published in the June 1987 issue of Esquire and reprinted here with the author’s permission.

I love the part describing his friend playing.

I too play for exercise. There's something rather special about hitting that one, sweet shot in a round that brings you back. It's the idea that we can achieve moments of athletic excellence, even if fleeting, that makes golf so wonderful and so infuriating at the same time.

My gosh, I wish I had my clubs in the trunk. It might be winter, but its 45 and sunny outside and the driving range nearby is probably open.

Thank you, Alex, for sharing this!