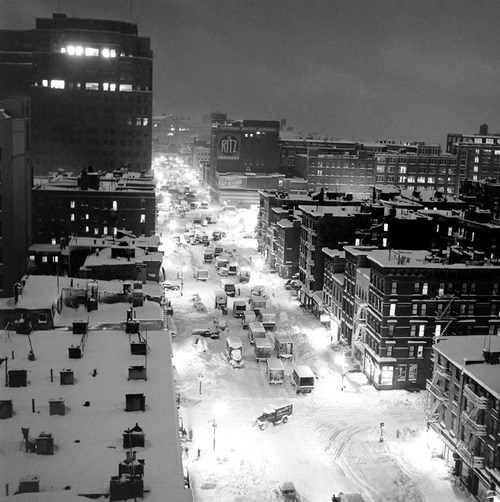 Categories:  1: Featured  Arts and Culture  Beat of the Day  Rock

We have about 24 inches in Rhode Island. For once, my little part of the state was spared power line damage.

Davol Patrick banned all driving in Massachusetts -- the whole state! I kind of doubt they pay much attention to things like that in Stockbridge and Chicopee, though. The T is not running today in Boston, either. TD Garden isn't exactly going to be hopping when the Bruins play this evening.

Wow, that's brutal. About a foot here in NYC I suppose. Lots of snow but nothing like you all have.

T'day's a day for some good cookin' and eating, eh?

CT state trooper forced me off the Merritt Parkway at 4 pm yesterday. She said I was driving too fast, actually, she said I was driving faster than 0 miles per hour so technically she can give me a ticket if I didn't get off the next exit. I was going 40 MPH and driving straight, not exactly putting myself in danger.

I guess she didn't like that my car was equipped with snow tires and was blazing past her. That said, I've been stuck in Trumbull, CT overnight and there's a ban on driving now - with the penalty being year in jail if they catch you. My gf wants to play it safe, I want to get to Vermont to at least have one day where I get to play in the snow.

I'd say it lowers your street cred.

But the ban will be lifted at 4, so you can still get to VT, probably.

[3] Definitely less than zero street cred especially with the probability of getting caught so high.

3) You have street cred? Maybe you can rent a sled with some dogs to pull it.