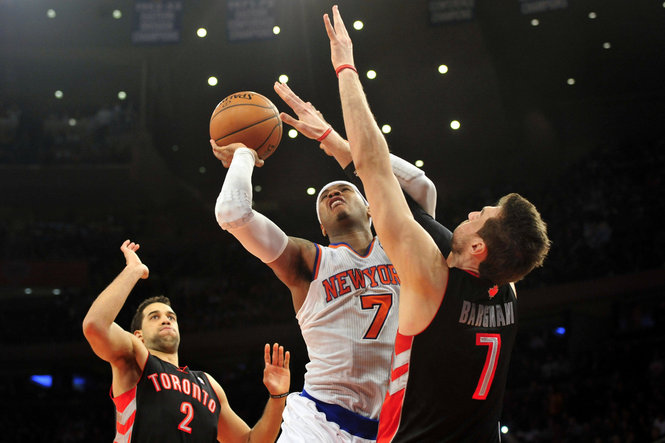 Charlie Pierce has a nice piece on the Knicks over at Grantland. A reminder that reading about sports can be, you know, fun:

By this time in the NBA season, every team, good and bad, needs a healthy dose of ridiculous in its game to keep the fans interested and the snark flowing until such time as the playoffs begin and everybody has to get grimly serious about the whole business. (Back in the day, there was never a better time to cover the Larry Bird–era Celtics than during the trackless days of mid-February and early March. Those teams had Bird and McHale — and, earlier, Cedric Maxwell — as snarkmasters supreme and, eventually, they had Bill Walton come aboard as a dartboard. It was open-mic night four times a week.) Right now, and much to his dismay, New York Knick Jason Kidd is the element of ridiculousness that’s adding a certain je ne sais clang to what is, at the moment, the best team not only in your Atlantic Division, but also in your five boroughs.

Kidd is in a slump. No, check that. Kidd is in a morass. No, check that. Kidd is in the Great Grimpen Mire and we may never see him again. Jason Kidd, who already has a plaque gathering dust as it waits for him in Springfield, has missed 34 of 41 3-point attempts, including six Sunday night, in a closer-than-it-should-have-been, sparing–you–from–watching–Seth MacFarlane 99-93 win over the Philadelphia 76ers. He has missed them long and he has missed them short. He has barely missed them and he has missed them by a time zone or two. Anne Hathaway had as good a chance of hitting a 3-point shot Sunday night as Jason Kidd did. But what’s interesting is that this amazing pile of statistical roadkill likely will not even matter in two months. The Knicks didn’t sign Kidd to hit 3-pointers in February. They signed him to hit Carmelo Anthony in the eyeball with a pass at a critical moment of a game in June. And, if he is a step slow at that, too, and he is, he is still being paid a handsome $9 million or so for three or four passes that people will remember long after the sound of The Bells of St. Mary’s fades.

hey look! a Knicks piece that doesn't have the requisite "THE SKY IS FALLING!! NEEDZ MORE LIN!!1" nonsense. Nice!

Beat writers... sure, when do we start?