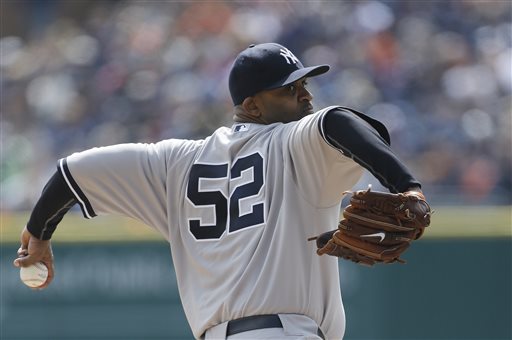 We may have to take our pleasure in small doses this year, $200 million payroll be damned, and today offered plenty of things to make us happy. Like Francisco Cervelli and Jayson Nix touching Justin Verlander early, staking the Yanks to a 3-0 to lead that was never in peril. And Kevin Youkilis irritating Verlander in the first inning when Youk hit a double. He’d just missed a home run on the first pitch of the at bat (long foul ball), and then doubled to left center field. He yelled something as he ran to first and when he reached second, Verlander stepped to him and screamed, “What did you say?” I don’t know if Youk was talking trash or just yelling at himself but the man has a talent for pissing people off.

Or how about CC Sabathia, still only throwing his fastball around 90 mph, handling the Tigers’ impressive hitters and throwing seven scoreless innings? Yeah, that was best of all. Some late insurance runs  put the game out of reach. Hell, even watching the Great Mariano work out of a jam in the ninth, striking out Torii Hunter–man, that dude has never done well against Mo–to end the game was pleasing.

“I don’t care who they got missing, that’s the Yankees,” Verlander told The Associated Press. “They have a winning mentality about them, and they’re going to find a way to win this year. You don’t ever take anything for granted. As you saw, it was the bottom of the lineup that did the damage.”
(Via Lo-Hud)

And, I for one, welcome our Frankie Brains overlords ...

A fitting birthday present on an otherwise recklessly dull day (at least for me) >;)

I guess the trick for me is not to watch. This was the 1st game I missed this year. I thought we stood no chance, but Verlander is right. Never underestimate the heart of a champion, and Nix is a champ.

Looking forward to seeing if our Man Kuroda can make Swish look foolish today and lower his 13 ERA.