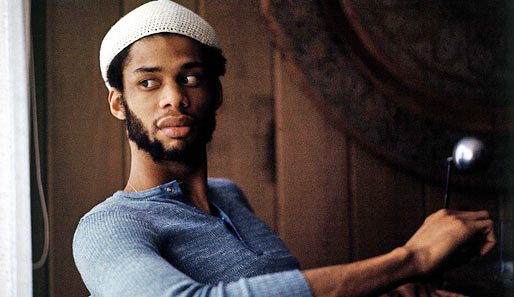 Cool little feature over at Esquire. Kareem Abdul-Jabbar lists 20 things he wish he’d known when he was 30:

Be patient. Impatience is the official language of youth. When you’re young, you want to rush to the next thing before you even know where you are. I always think of the joke in Colors that the wiser and older cop (Robert Duvall) tells his impatient rookie partner (Sean Penn). I’m paraphrasing, but it goes something like: “There’s two bulls standing on top of a mountain. The younger one says to the older one: ‘Hey pop, let’s say we run down there and screw one of them cows.’ The older one says: ‘No son. Let’s walk down and screw ’em all.’” Now, to counter the profane with the profound, one of my favorite quotes is from the philosopher Arthur Schopenhauer: “Talent hits the target no one else can hit; genius hits the target no one else can see.” I think the key to seeing the target no one else can see is in being patient, waiting for it to appear so you can do the right thing, not just the expedient thing. Learning to wait is one of my greatest accomplishments as I’ve gotten older.

Listen more than talk. And that’s all I’m going to say about that.

Being right is not always the right thing to be. Kareem, my man, learn to step away. You think being honest immunizes you from the consequences of what you say. Remember Paul Simon’s lyrics, “There’s no tenderness beneath your honesty.” So maybe it’s not that important to win an argument, even if you “know” you’re right. Sometimes it’s more important to try a little tenderness.

When choosing someone to date, compassion is better than passion. I’m not saying she shouldn’t be passionate. That’s a given. But look for signs that she shows genuine compassion toward others. That will keep you interested in her a lot longer.

Tags:  20 Things I Wish I’d Known When I Was 30  esquire  Kareem Abdul-Jabbar

Gosh. I remember when he was still a young teenager with Power Memorial. As I recall, his HS team was undefeated. They scrimagged against my alma mater HS (White Plains)and beat us by about 10 (White Plains won the 4A state championship of public schools that year). When I was about 11, I remember hearing about Lew on the playgrouds. Seems he's gain quite a bit of wisdom over the years!

This one is really good too:

20. Everything doesn’t have to be fixed. Relax, K-Man. Some stuff can be fixed, some stuff can’t be. Deciding which is which is part of maturing.

one of my most random celebrity encounters of all time, standing on the corner of 5th ave near the Empire State Building...just chillin' in a Planet Hollywood jacket. No one else on the corner with us, I didn't have the nerve to say anything.

And yes, he's COMICALLY large in person. It's insane.

I'm about 6'7" and have forever been telling people that it seems normal to me. It still surprises me when someone remarks on my height. To me Kareem is the example of someone who is tall.