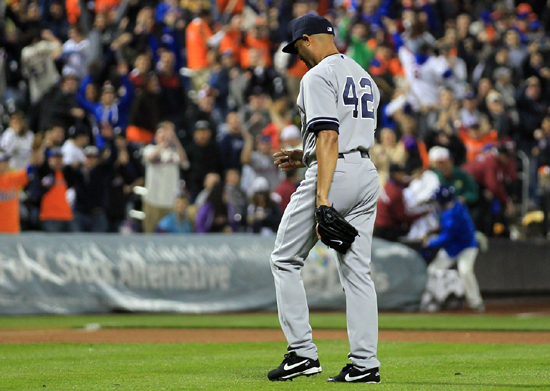 Are there sports fans out there that believe good things will happen to their team? Oh, I’m sure there are, and if you root for the Yankees, you’ll find a healthy group of them and why not?

Not me. I plan for the worst and am pleased when things go well. So going into this week I figured Mariano Rivera was due to blow his first save of the season against either the Mets or the Red Sox. When the Mets had Rivera throw out the first pitch to last night’s game, well, my neurotic clock was set in motion.

Really, it’s all Brett Gardner’s fault (well, technically, it’s still Alex Rodriguez’s fault but that goes without saying). On Monday, he robbed Daniel Murphy of a home run and Murphy later got the game-winning hit. Gardner robbed Murphy again last night, not of a home run but at least a double, and so when Murphy dumped a double against Rivera to lead-off the bottom of the 9th, Yankee fans knew the improbable was about to happen. At least I did. I watched the rest of the game without sound.

Two base hits later the Mets had a 2-1 win spoiling a terrific performance by Hiroki Kuroda (seven scoreless innings).

Matt Harvey was great, too, allowing one run in 8 innings.

It was a good game with a great ending for the Mets. And it was a tough night of sleep for Yankee fans, at least this one.

That was a bummer. I went into this series thinking the Mets would rock Hughes, the Yanks would touch up Harvey enough for a W then take the 2 in the Bronx.

Those cheapie doubles feel all the more cheap and unlucky when it's Mo on the mound (or conversely, Posada's vs Pedro in the ALCS.) He didn't look too pleased after it fell fair.

I don't post much anymore, so I haven't followed the scuttlebutt. Is the consensus that Vernon Wells is finally rounding into form?

This is how much of a mensch Mo is. He knows none of us can be as good as he is, so every once in a while he'll blow it, just to make the rest of us think "hey, not even Mariano Rivera is perfect, so my screwups are ok."

That's my theory and I'm sticking with it.

Reading your recap and all was going well until I nearly spit my coffee all over my computer monitor with your "well, technically, it’s still Alex Rodriguez’s fault but that goes without saying".

Holy crap, that was funny.

Obviously we know what we have to do about Murphy in the future: wait until he's closing in on 40 and he's weighing retirement, then sign him on a year-to-year basis for the next 2-4 years. He'll be wonderful for us against the Mets (unless Gardner robs him of DH time)...

Wells is doing alright. He's hitting a little below his career averages, and better than he has in years.

Yeah, I'm still onboard despite this lull.