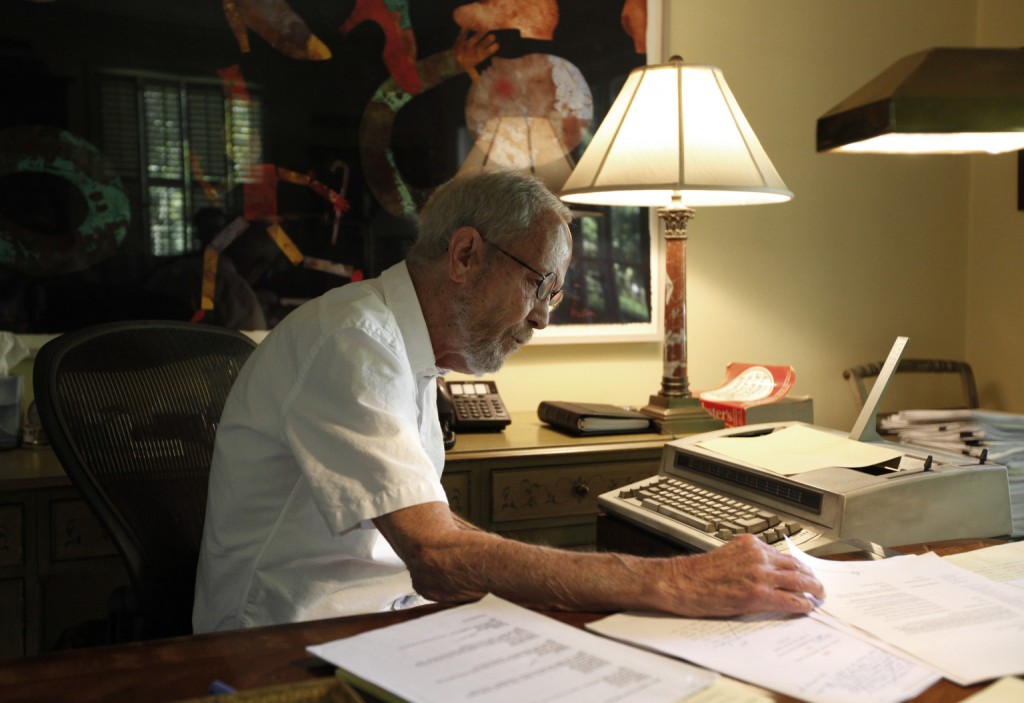 Over at the New Yorker, Anthony Lane delivers the finest tribute to Dutch Leonard that I’ve come across so far:

Once you hear the Dutch accent you can’t get it out of your head, and for innumerable readers it became a siren song. I fell prey to it in the mid-eighties. Leonard had a breakout, with “Glitz” (1985), and it led many of us to raid the back catalogue with glee. Some of the books weren’t easy to get hold of, and the hunt only sharpened our zeal. A friend and I ravened through whatever we could lay hands on; there is a strange, barely sane satisfaction in happening upon an author—or a painter or a band—and making it your mission to consume everything that he, she, or they ever produced. You rarely succeed, yet the urge for completeness is a kind of love, doomed to be outgrown but not forgotten. I have often pursued the dead in that fashion, but Leonard may be the only living writer who spurred me to such a cause.

…One proof of literary genius, we might say, is a democratic generosity toward your mother tongue—the conviction that every part or particle of speech, be it e’er so humble, can be put to fruitful use. If that means trimming the indefinite article, leaving us with a Albanian and a oyster, so be it. Nothing need go to waste. Richard again, aiming at the formal locutions of a police report, and missing by yards: “I cruised the street and the street back of the residence, the residence being dark, not any light on, but which didn’t mean anything.” So much dumb-ass delusion in so little space, and the linguistic shortfall squares with an overriding sense, throughout the novels, that our grip on the world—and this goes for all of us, not just the chancers and the thugs—is never as secure or as enduring as we would like. Marriages crack like plates; one side of the tracks has no concept of life on the other side, though it may harbor a risky desire to find out; and words will not stay still. That is why the movies inspired by Leonard’s fiction (a slew of disasters plus the odd success, like “Get Shorty,” “Out of Sight,” and “Jackie Brown,” which was based on “Rum Punch”) struggle to match his equilibrium. The souls that he surveyed, even when they were played by George Clooney and John Travolta, were unquiet and fairly uncool. Leonard’s gaze was cool, but, in all honesty, it belonged in a book.

I’m curious what Leonard’s reputation will be in 40-50 years. He sold a lot of books in his time but was also a critical darling. Not many writers enjoy both kinds of success but he sure did.

I should add that Leonard's success, both critical and financial, was not only hard-earned but didn't happen overnight.

I wasn't crazy about Lane's piece. He was trying too hard, I felt, especially with that reverse snobbery about Iris Murdoch - as if the two writers were out to achieve similar ends.

I did see a nice piece by Michael Connelly somewhere and a quick, fun one from Bruce McCall.

2) Yeah, I get teh Murdoch thing but it's a little facile.

[3] Lane is usually such a snoot, I think he was trying to make his regular guy bona fides.