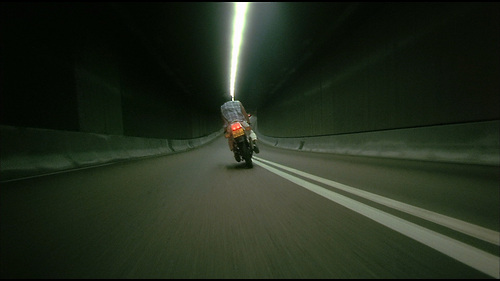 I played high school baseball with a mountain of a kid named Burns. He was an offensive lineman, really, and he played third base for us. He was the kind of guy who struck out or hit the ball 350 feet. He wasn’t mobile in the field but he had a strong arm, the kind of guy you hated to have a catch with warming up because he threw so hard. One day during infield practice, a ground ball took a bad hop and hit Burnsie in the nuts. He remained in his crouch for a moment and then, in the same position, fell to the ground. I was at second base and it was hard not to laugh. But you had to admire his lack of fear.

I thought of Burnsie last night when Shane Victorino led off the bottom of the 7th with a screamer to third. Eduardo Nunez, no third baseman by trade, took one look at it and ducked out of the way. You couldn’t blame him but it was play he had to make. It was the last hitter that Hiroki Kuroda faced and before the inning was over the Red Sox turned a 4-4 game into an 8-4 advantage. Losing the game wasn’t Nunez’s fault, but it was a drag because after giving up 4 runs in the first and looking absolutely lost, Kuroda pitched valiantly.

The Yanks ran into some back luck, hitting the ball hard but not getting hits (having a gimpy Alex Rodriguez on the bases failing to score from first on a double in the gap by Robinson Cano), and their recent string of tough loses to the Red Sox continued. Worse than their hurt feelings was the fact that the Rays, Orioles and Indians all won.

A cruddy night for our boys, no other way to put it.

Used to be that the big kid was most often the catcher because he gave the pitcher a great target and blocking the plate on a play at home was a cinch. Nowadays the big kid plays shortstop, go figure...