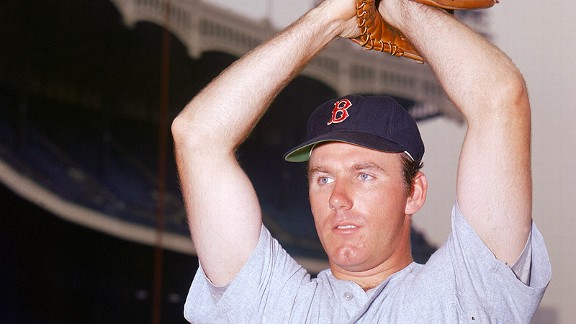 Here’s our pal Leigh Montville on Ellsbury as a Yankee:

There was a curious, season-long disconnect to close out his time in Boston. Despite all the good things he did during the championship run, there always was the sense he was going to leave. He was in the last year of his contract. His agent was Scott Boras, the same no-prisoners negotiator Johnny Damon used. The centerfielder would want the big years and the big money and the Red Sox would not outbid the other bidders. He was good, but not break-the-bank good. Everybody understood.

The surprise — ah — would be the destination.

I think all of this seems about right from a Boston perspective most likely. What has been interesting is the passive-aggressive tone coming out of the (John Henry owned) Boston Globe the past 48 hours. It's not the full-throated hatred you heard after the Damon signing, but I think Pete Abe's latest sums it up pretty well:

Players prioritize different things. Ellsbury's priority was getting every dime he could, and good for him. All of us, no matter what we do for a living, want what we're worth. In this market, he was worth $153 million to the Yankees, an aging third-place team that built a stadium they can't fill very often.

He was not worth that to the Red Sox, a team with a smaller payroll and a significantly better farm system. The Red Sox learned their lesson with Crawford that paying for a fast player to get old is risky.

I never got the impression Ellsbury much liked Boston. He rarely interacted with fans or in the community. Think about it, when was the last time you saw a photo of him in something other than a baseball uniform? This was the team that happened to draft him, that's all. Strictly business.

[1] Yes, Pete is mad, but he did say what I was gonna say. The market predicates the value of players today, and the Yanks' need for him heavily outweighed Boston's; I believe Boras exploited every little detail about the NY market and the need to get what he got for Ellsbury. Funny, but with Boras I always get the sense that business is personal.

And let's be real, one of the reasons Boston hustled Crawford out as fast as they could was because he called out the Boston public for their nature towards him, which many of us suspected was the same reason Jim Rice called them out years ago. Big Papí has gotten a pass when he's productive, but it was hateful when he wasn't.

Fun experiment to address the fallacy that all players will benefit from playing in New York because of the marketing potential; for my straw man I chose my housemate; she loves pop culture and stays current on a lot of TV shows and trends, constantly annoying me with TV show updates and replays of the latest music on Z100 or Fresh 102.7. She is like your typical casual baseball fan; would go to a game if given a ticket, knows a few players' names, but does not actively root for any particular team. Yet she will constantly bug me with questions about Derek Jeter and A-Rod; who in particular she asked me if she's supposed to like him or not (shrug, I don't know how casual fans think, so don't ask me). So I asked her what she knows about Robinson Cano via text.

To me, it don't work for everybody...

Montville is always a good read, but (unless I missed it) he neglected to mention Youkilis. I would have been interested in his take on Youk going Yankee.

The more Red Sox fans distance themselves from Ellsbury, the more I look forward to watching him. I also enjoyed reading how Ortiz was the most beloved of all BoSox last year, highlighting, and underlining the unmitigated hypocrisy of the PED backlash. Of course, all of NY would be guilty of it too, if ARod was hitting in the clutch last October, and not preparing for his wildly anticipated off-Broadway run this winter.

I think Ellsbury will get some vocal backlash, but for Damon, who was beloved in Boston, it was different.

Putting it in context is important. Damon was a vocal leader on that team and had a lot of personality on that team. His "jesus" look was copied with the beards last year. Damon was on the team that beat the curse. The fans in Boston are not appeased, but certainly 3 rings in the last 10 years has made them more satisfied.

The Yanks always overpay for the big name guys. Who else would pay ARod, Tex, CC and Jeter that much? They pay that price because they can afford to, and that is what is expected of them now.

The Yanks could be playing possum with Cano at this point. Leaking that they are willing to pay him too, and go over the 189 threshold. It makes sense. They want other teams to get fleeced and overpay some players too.

So much of this hinges on ARod's suspension. Thanks for dragging this out so long Alex! I know it is extremely unlikely for this year, but could the Yanks just cut ARod and pay him out? Would that $ still count towards the cap?

[4] And what's Youk's status for the coming year?