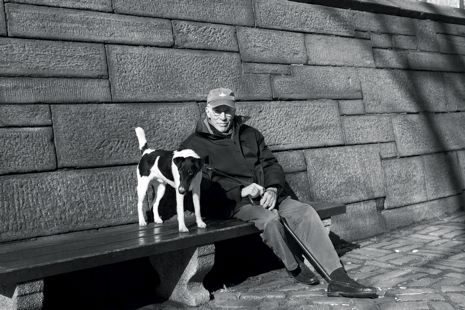 Nice piece by Roger Angell in the latest issue of the New Yorker:

What I’ve come to count on is the white-coated attendant of memory, silently here again to deliver dabs from the laboratory dish of me. In the days before Carol died, twenty months ago, she lay semiconscious in bed at home, alternating periods of faint or imperceptible breathing with deep, shuddering catch-up breaths. Then, in a delicate gesture, she would run the pointed tip of her tongue lightly around the upper curve of her teeth. She repeated this pattern again and again. I’ve forgotten, perhaps mercifully, much of what happened in that last week and the weeks after, but this recurs.

Carol is around still, but less reliably. For almost a year, I would wake up from another late-afternoon mini-nap in the same living-room chair, and, in the instants before clarity, would sense her sitting in her own chair, just opposite. Not a ghost but a presence, alive as before and in the same instant gone again. This happened often, and I almost came to count on it, knowing that it wouldn’t last. Then it stopped.

People my age and younger friends as well seem able to recall entire tapestries of childhood, and swatches from their children’s early lives as well: conversations, exact meals, birthday parties, illnesses, picnics, vacation B. and B.s, trips to the ballet, the time when . . . I can’t do this and it eats at me, but then, without announcement or connection, something turns up. I am walking on Ludlow Lane, in Snedens, with my two young daughters, years ago on a summer morning. I’m in my late thirties; they’re about nine and six, and I’m complaining about the steep little stretch of road between us and our house, just up the hill. Maybe I’m getting old, I offer. Then I say that one day I’ll be really old and they’ll have to hold me up. I imitate an old man mumbling nonsense and start to walk with wobbly legs. Callie and Alice scream with laughter and hold me up, one on each side. When I stop, they ask for more, and we do this over and over.

Roger writing about himself is as stimulating as when he opined about baseball. We may live as long but will never explain it better.