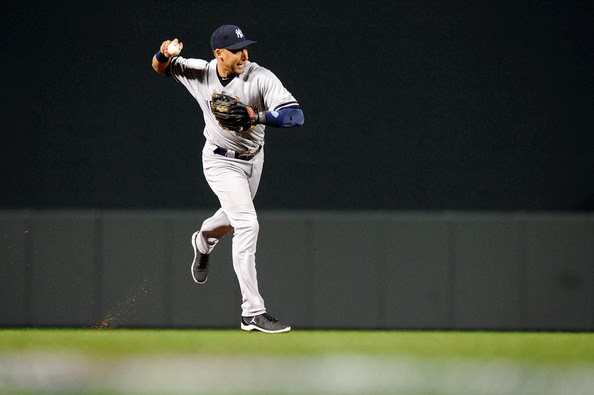 Hm. Good stories, but I think his assessments are kind of dumb. For one thing, how on earth does Pat Jordan know that Jeter's house is a child's house? (He doesn't, obviously.) For another, the big rap on Jeter's game is that he doesn't get to balls that really good shortstops get to. Maybe you can't throw it if you don't catch it, but you can't catch it if you don't get there.

So Derek values his privacy? How is that a bad thing, Pat? Honestly I only care about what he does on the field.

Alright, here's our implicit bargain with the universe. We won't go apeshit trying to make Derek Jeter out as the second coming of Honus Wagner. 'Cuz he ain't.

And on the flip side, people need to stop trying to spin reasons to hate him out of thin air. What is there to hate exactly? He doesn't go to his left well? I know that already.

Unless envy is the place you get your hate from. Yeah, I'd also like to have a giant house and make snoo-snoo with Scarlett Johannson. Guess I should have done more laps in high school.

What's left is a guy who's remarkable for being solid, consistent, and not an asshole. I'm sorry, but 20 years of not giving offense doesn't coalesce into an offense of its own. I'm sorry he's boring. But none of it ever felt fake to me.

This piece is a great example of why I don't read a lot of the baseball features that are out there. Jordan obviously has no idea that the personal stuff about Jeter makes him sound like a complete d-bag. This aint a soap opera, and I am not a baseball fan for the gossip. To paraphrase Bill Hicks, reading this is like having a turd fall into my drink.

So, on substantive matters: Maybe Nova is going the way of Nunez, lots of talent that never comes to fruition.

[5] No, not a good comparison. The thing is, Nova has already provided plenty of value (somewhere between 6.6 and 7.9 WAR, depending on who's WAR you use), whereas Nuñez never really gave the Yankees anything (negative WAR!).

All I know is that performance made me want to declare WAR. How many more of those stinkers?

I'm with BB in NC. Jeter is not up for sainthood; he's no Mother Theresa; he can't bring peace to the Middle East. He's simply one of a handful of the best shortstops ever. He's a BALL PLAYER and for giving us 20 years of professionalism at the highest level, I can, should, and do say "thanks."

Those first 5 paragraphs are horseshit, and ad nothing to the rest of the article.

How dare he judge someone's character based on a house he never entered and a relationship he knows nothing about. Is a 29-day relationship (my parents) that leads to marriage somehow better than 5 years that does not. What's an "acceptable" engagement period for Mr. Jordan? WTF?

The more I read his stuff, the less I like him.

Jeter's an easy target for a guy like Jordan. Poking the bear. Dissing the captain... eh, it's a free country.