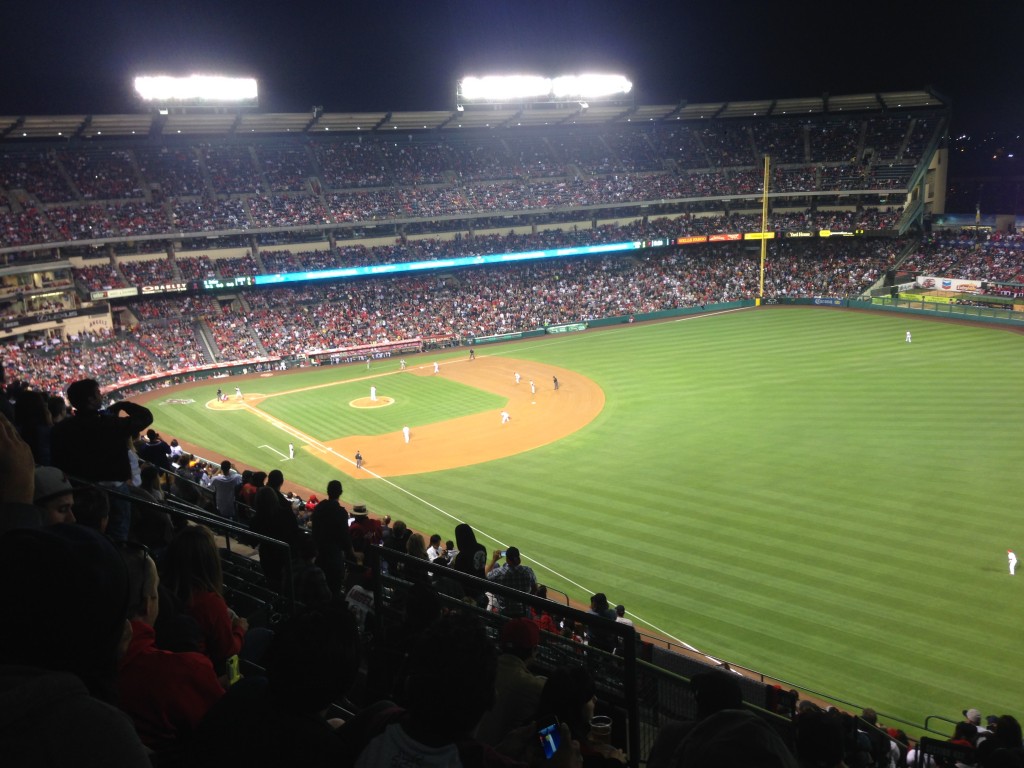 ANAHEIM (BB) — I spent much of the past few weeks debating whether or not to spend the chunk of money necessary to get tickets for the whole family to catch the Derek Jeter Show on its last run through Southern California, but only a few days ago a friend offered me four tickets at face value and I snapped them up. The seats were up high in the view level and far down the right field line, but it didn’t really matter. We’d be in the house.

The only real problem with having three children is that the world often seems to be divided into four-person servings. Since we wouldn’t be able to take the whole family, my wife stayed home with our younger daughter, my older invited a friend who’s madly in love with Mike Trout, and we were off.

Back in the early and mid 1990s when the Angels were irrelevant, Anaheim Stadium often felt like Yankee Stadium West as thousands upon thousands of transplanted New Yorkers and adopted fans filled the seats and outshouted fans of the home team. The Angels’ rise since their World Series win in 2002 has mitigated some of that, but on Wednesday night it felt like old times. Yankee fans were out in force to pay their final respects to their hero, and it was beautiful. We heard our first “Der-ek-Jee-ter!” chant before we even spun through the turnstiles.

We found our seats just as the final moments of the Angels’ Derek Jeter tribute video played on the big screen, and we cheered politely as Albert Pújols, Jered Weaver, Howie Kendrick, and Trout presented Jeter with a customized stand-up paddle board that he later promised he’d use in his back yard. This paddle board wouldn’t fit in most backyards.

After Jacoby Ellsbury drew a walk from Anaheim’s Hector Santiago, Jeter came up and drew the first of what would be several ovations on the night. He lofted a lazy fly ball to right center field, but when right fielder Collin Cowgill collided with Trout, the ball fell to the grass and Jeter was aboard on the error. Carlos Beltrán walked to load the bases, Mark Teixeira doubled down the line in left field to drive in two, and suddenly the Yankees were rolling. Alfonso Soriano struck out on three pitches to slow things down a bit, but Yangervis Solarte plated a third run with a sacrifice fly, another run scored when Santiago fielded Brett Gardner’s dribbler and fired it into right field, and Gardner eventually scored on a Brian Roberts single.

The five-nothing lead was nice, but there was more. Jeter came up again in the second inning and looked at a pitch for strike one. A good portion of the crowd was standing, and the sun had dipped below the top of the stadium, letting us see the flashbulbs popping throughout his at bat. Jeter liked the next pitch, and he rocked it out to left field. Perspective can play tricks with you in the ballpark, making you think that lazy fly balls could be game-changing home runs, but there was no doubt that this ball was well-struck. When it cleared the fence by a few feet, I leapt to my feet along with the rest of the 48,000 and temporarily lost my mind.

Derek Jeter became my favorite Yankee on the day he was drafted in 1992. I followed his progress through the minor leagues in the agate type of USA Today’s Baseball Weekly, I bought his baseball cards by the dozen, and his name has always been the first I look for in every Yankee box score since the fall of 1995. On Wednesday night, in the last game I will ever see him play in person, my favorite player — probably my last favorite player — had hit a home run. I thought of all that as he coasted around the bases, then I leaned over to my son Henry and said simply, “You just saw Derek Jeter hit a home run.” I could’ve gone home right then. 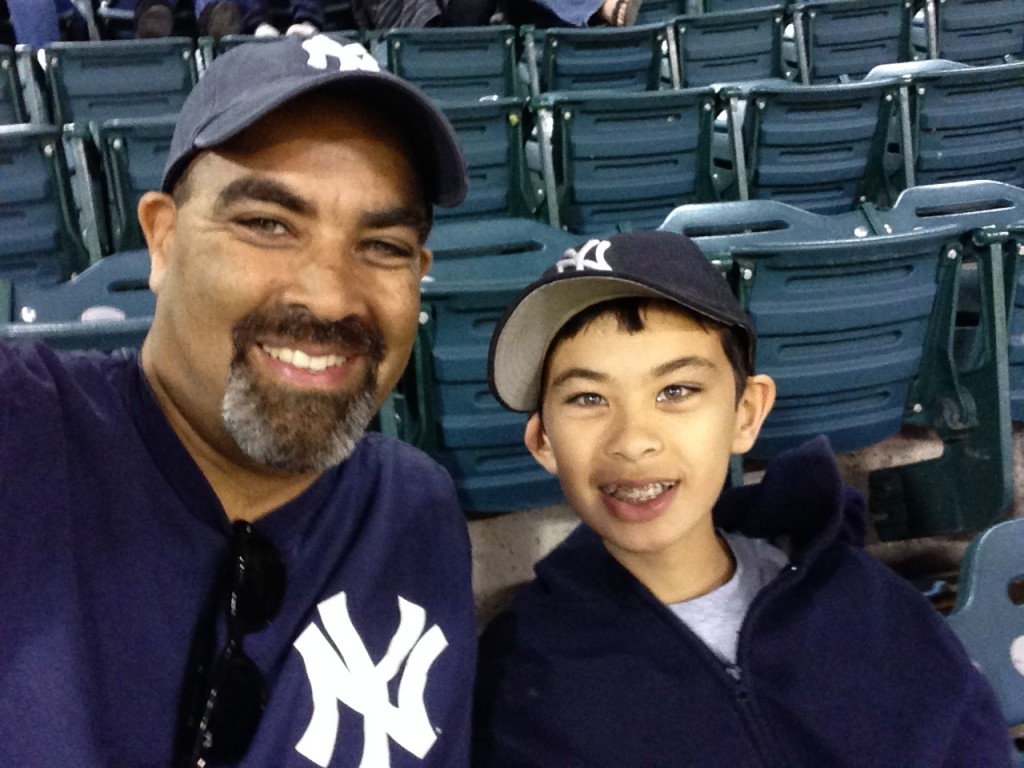 After living like monks for so long, Yankee hitters were feasting, and starting pitcher Vidal Nuño was the happy benefactor of that early 6-0 lead. He set the side down in order in the first, but he ran into a little trouble in the second, giving up a run but escaping further damage by getting Cowgill to pop up with the bases loaded.

Henry and I missed at all, though. He had tripped on our way into the park, scraping up his elbow pretty badly, and we spent the bottom of the second inning in the first aid center having the cut tended to. So the Nuño that I saw was dominant all night long. How dominant? I didn’t see an Angel hitter reach base until the top of the seventh, and there really wasn’t much hit hard. Trout hit a ball to the fence in the first inning, Solarte made a nice diving play to rob Kendrick in the third, and Gardner made a diving catch — Kendrick was the victim again — to end the sixth, but that was it. Aside from those plays, it was just one lazy pop up or fly ball after another. When C.J. Cron snapped Nuño’s string of thirteen straight retired with a ringing double leading off the seventh and Erick Aybar followed with a fly ball to the warning track in left, manager Joe Girardi came out and relieved him after the best start of his young career.

By the top of the eighth a vast majority of the Angel fans had left, but almost all the Yankee fans had stayed, no doubt waiting for one last Jeter at bat. With the first five Yankees reaching base in the inning (Solarte double, Gardner single, Roberts walk, John Ryan Murphy single, Ellsbury single), we were all transported to the Bronx. Chants of “Let’s-Go-Yan-Kees” rang around the stadium as fans in pinstripes and road greys stood and celebrated, the type of celebration that tastes a bit different because it’s happening in an opposing ballpark whose fans had already disappeared.

And then Derek Jeter walked to the plate with the bases loaded.

This would definitely be the last time that most of us would have a chance to cheer him, and every one of us stood. I brought my hands to my mouth, chanted his name, and hoped. The at bat lasted only three pitches, and when he bounced harmlessly to the pitcher and barely beat the throw on the back end of an attempted 1-2-3 double play, it somehow didn’t matter. That moment of possibility with the bases loaded was something that I’ll never forget, a brief look back at that childhood optimism that helped you believe your hero would come up with the big hit every single time.

As I settled back into my seat, my daughter turned to me and asked a simple question.

“What if he had hit a grand slam?”

I paused a minute before responding, “My head would’ve exploded, so it’s probably better that he didn’t.” 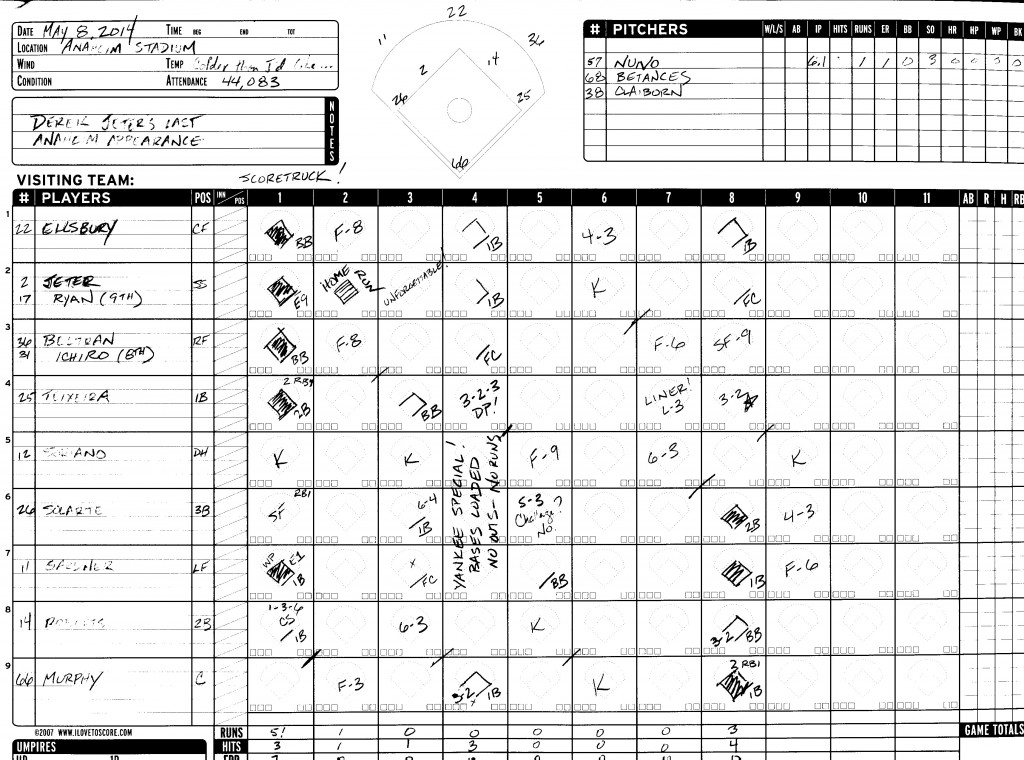 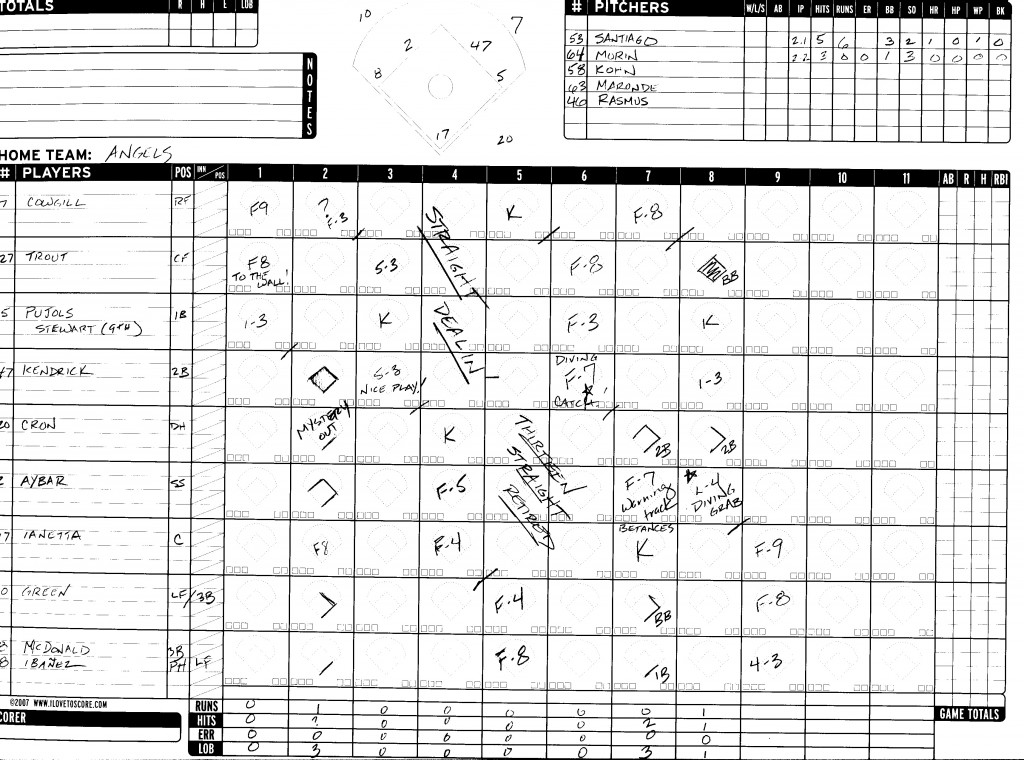 Last year, you got to see Mariano strike out Pujols to end the game for Mo's final season (and in cherce seats, too!), and this year you get to see Jete's hit a homer on his farewell tour.

Great story, Hank. That's the stuff that life's all about.

Excellent -- glad you got to go to such a good one, Hank.

I know what you mean about the family-of-five thing. Growing up in New York with a brother and a sister, the fact that the world is better organized for groups of four was very salient to me. Checker cab or two taxis, for example.

Hank, can I send people to you to learn how to work a scorebook? A thing of beauty: clean, legible, almost spare-looking, until you realize there's a wealth of observation there.

Too many of the pages I see look like a dog threw up on them. Too many people on my team seem to think they have to jot instead of write, that there's some hurry.

You never have to hurry when you're writing in a baseball scorebook. Take a breath!

Second, why do you think you'll never have a favorite player again?

Third, I love how you capture the moment of possibility. That's great.

Great stuff as always, Hank. Very cool that you and the kids caught Jeter's last regular season game, and HR in Anaheim.
First time I went to see the Yanks at Edison Field as a transplanted NYer was in August of '96. My wife and I were in line for tickets, and a guy in Yanks cap (acknowledging my Yanks cap) came over and handed us two tickets, free of charge. They were right behind the dugout on the 3b line.
Yanks fans so outnumbered Angels fans it felt like a home game.
Those were the good old days.
I saw a lot of Yanks games in Anaheim, and by the time I returned to NY (2002) the place had become a house of horrors for the Yankees with the rally monkey and all that.
I saw El Duque give up something like 47 runs one game.
Is the rally monkey finally dead, or do they still have that thing?

Beautiful Hank! I am a transplanted New Yorker and have been in LA since 93. I remember taking over the Big A, and it felt like Bronx West. I was thinking of going to last nights game, but I am fighting a cold, and watched it on tv.

I had almost the same vantage point as your seats last night when I was at Game 5 of the ALDS. That was the only game I went to that had a majority of Angels fans. They had those F'n thunder sticks, I hated it!

Exellent writeup, and a lifelong memory!

[4] I don't bring score books to games as a rule, but I wanted have a record of last night. From a fan's perspective, I've finally accepted that the book doesn't have to be perfect. I was tempted to fill in the blanks in that second inning when my daughter took over, but I quickly realized it wasn't worth the effort. And when I got home I realized that I had missed an ENTIRE pitcher. I had no idea that Kevin Jepsen had pitched, so he doesn't appear on my card. Again, no biggie. It was fun, and I'm glad I'll have that record.

[5] Hemry's okay, but the cut is deep. I think we'll have to take him to urgent care for some stitches, which is a drag.

As for my favorite player, I know I'll always have players that I like more than others, but I can't see myself identifying one of them as my favorite. I don't know if you can really form connections like that at an older age.

[6] Sadly, the rally monkey lives, but he didn't make an appearance last night.

And to all... Thanks for reading and thanks for your kind words.