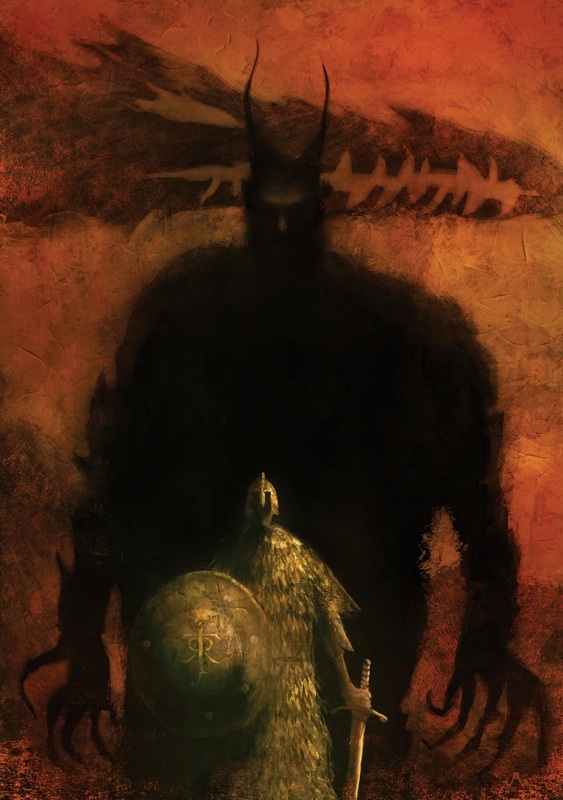 I tried to read The Hobbit when I was a kid but I thought it was boring and I didn’t make it too far. I never read J.R.R. Toilken’s famous Lord of the Rings triology. But I did enjoy Joan Acocella’s review of Toilken’s newly-published translation of Beowulf:

As an adult, Tolkien could read many languages—and he made up more, including Elvish—but the number is not the point. Even in secondary school, Carpenter says, “Tolkien had started to look for the bones, the elements that were common to them all.” Or, in the words of C. S. Lewis, his closest friend, for a time, in adulthood, he had been inside language. Perhaps he couldn’t come back out. By this I don’t mean that he couldn’t talk to his wife or his postman, but that Old English, or at least that of “Beowulf,” was where he was happiest. He knew how it worked, he loved its ways: how the words joined and separated, what came after what. Old English is where he spent most of the day, in his reading, writing, and teaching. He might have come to think that this language was better than our modern one. The sympathy may have gone even deeper. Like Beowulf, Tolkien was an orphan. (He was taken in by his grandparents.) He grew up in the West Midlands, and said that the “Beowulf” poet, too, was probably from there. He did not have difficulty living in a world of images and symbols. (He was a Catholic from childhood.) He liked golden treasure and coiled dragons. Perhaps, in the dark of night, he already knew what would happen: that he would never publish his beautiful “Beowulf,” and that his intimacy with the poem, more beautiful, would remain between him and the poet—a secret love.

I had read the Hobbit as a teenager and saw the cartoon versions of the Lord of the Rings and Hobbit. When Peter Jackson released his first film, I was hooked and read the trilogy, and seeing the movies after reading the books was a wonderful experience as he was very true to the story for the most part. The special effects and budget of the movies allowed for a great interpretation of the trilogy.

His Hobbit films lack the same thrill for me, but it could be oversaturation of that world. (I have all 3 extended versions of the Lord of the Rings and watched them several times). It was pretty cool to watch the Hobbit in 3D in the comfort of my own home as we just purchased a 50" flat screen 3D smart HDTV.

I still have no idea of all that this tv does, and what a pain in the ass it was to mount on the wall and get it to connect to the wifi. F..k!!! I added a soundbar and have not been to the movie theater in over a year.

[0] AB, I am a little surprised that you haven't picked up LOTR again - you have to get through quite a few details at the start, but it is definitely worth the read.