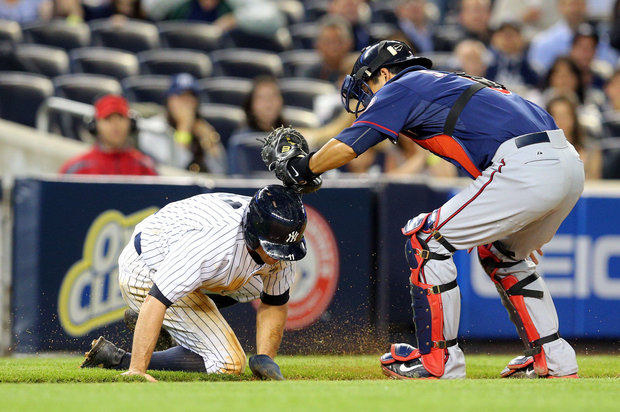 Been thinking a lot about Jeter these days and one thing that came to mind recently is that I don’t recall seeing him make too many mistakes over the course of his career. Mistakes being different from errors. He’s made those. And we can debate whether or not his penchant for sacrifice bunting over the years is an error or a mistake. What I mean by mistake is that you rarely see him make a bad play.

He made one last night.

In the 5th inning, with Brett Gardner on second base, Jeter hit a line drive to right field for a base hit. It reached the right fielder on one hop, which was not enough time to allow Gardner to score. Gardner was held at third. At the same time, Jeter rounded first and drew a throw, getting himself in a rundown in the hopes that Gardner could score.

I’m not sure Gardner is the right kind of baserunner for that kind of high-wire act. He’s fast but he’s not cagey and doesn’t have great instincts (we’ve seen this played out with him as a base stealer). And so in the middle of Jeter’s rundown, Gardner got in a rundown and didn’t score. By the time Gardner was tagged out, of course, Jeter was on third.

“It’s my job in that situation, if you think there’s a play at the plate, you’ve got to go and try to go to second base to trade an out for a run,” Jeter explained. “Gardy wasn’t going, so it’s not my job to think what’s going to happen. I’ve got to make sure he’s going. Good play by them, but I assumed he was going. I shouldn’t assume.”

Gardy isn't the most instinctive, but props to him for a good base stealing percentage thus far this year.