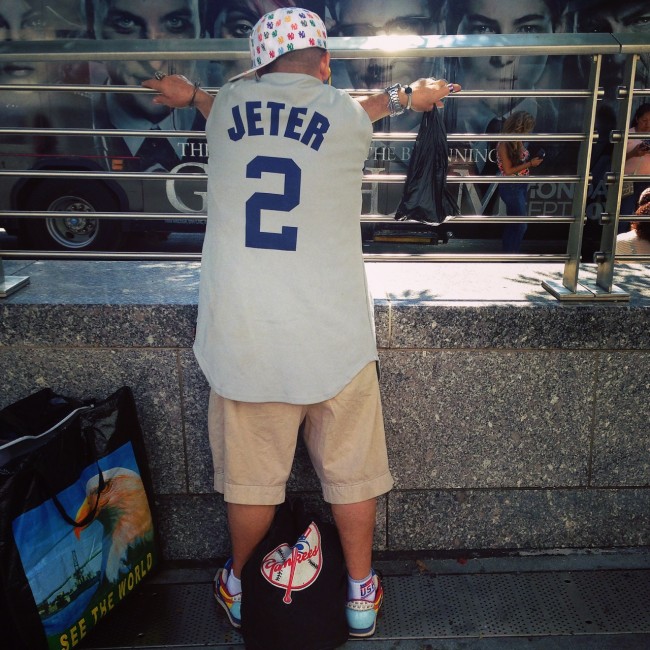 There is no shame in going out on a weak team even if it is something to which you are not accustomed. Jeter looks old now at the end, he looks tired, and so do the Yankees. He hasn’t had that Willie Mays 1973 moment of humiliation but he was so bad in August that the talk radio chatter about dropping him in the lineup seemed to be getting to him. Every at bat is a Lifetime Achievement Award ceremony. It must be exhausting. Top of that, the Royals had a kid starting today throwing 98 mph. Almost each guy out of the pen throwing 97 plus. Good luck, old man.

Nobody hit much of anything today. Royals didn’t hit much, either. But 2 is more than none and they leave New York with a series win.

Jeter addressed the crowd and said the he hoped he’d brought us joy and entertainment. That you, did, Hombre. He said the right thing as always, but you can’t imagine it was much fun for him, all the attention on himself instead of the team, playing out the string without much of a chance for October.

The Farewell Tour begins its Final Weeks! run. now. I’m sure Jeter will be hugely relieved when it’s all over.

[0] He said the right thing as always, but you can’t imagine it was much fun for him, all the attention on himself instead of the team...

Which he surely must have known would happen when he announced his retirement before the season started.

What I love about Jeter is all the stories coming out and the things he has done for people, all very quietly too.

How is he not one of the most talented to ever play the game?

Get the F*UCK out of here for saying he's not one of the most talented baseball players ever!!!

[1] It has to be better than the endless speculation and punditry from the media we all had to endure last season about whether or not he should retire. A friend of mine showed me a column by someone who insisted that Jeter was the ultimate height of selfishness for negotiating a higher salary than his skills deserved, starting almost every day (mainly at at shortstop!), hitting in the two slot because of his diminished production, his eroding defense and for how it all affected the rest of the team in general. The columnist even compared it directly to Mo's swan song season, stating that Mo was still Mo in the end while Jeter was not as if that were justification for Jeter's selfishness. I can't even dignify that with a link or response.

I'm of the belief that Jeter did himself and others a favor by cutting to the chase and ending what undoubtedly would be vicious vitriol from many corners of the baseball world who would have even demanded just about everyone's head because he continued to play, never mind play as sub-optimally as he has to date.

Though the Yanks and MLB to a certain extent have seemingly gone over the top in celebrating his career and retirement, I can't see what else the Yanks in particular have to celebrate so much this year, and considering it's the official end of a potent and memorable era for them and baseball, I can deal with the notion of seeing the end coming better than the sudden shock of it ending (which almost happened with Mo) after such a long and touted crescendo of disgust and disrespect. Better to be wistful than hateful.

1) That is true. He has a lot invested in his image. He made that choice to be fetted this way. So he's not without responsibility. I still think it was probably a choice he made a business guy/icon rather than as a guy who'd really enjoy it.

I think Jeter was thinking of the fans when he announced his retirement at the beginning of the season. He wanted them to have a chance to say goodbye. I agree with Al, everytime he comes to the plate the fans home and away cheer like it is a playoff at bat in the bottom of the 9th. Jeter is great at handling pressure in the playoffs, but all season long is tough for anybody, especially a 40 year old, who came back after almost a whole year off. I am surprised and delighted that he could play almost the whole year without missing many games. You know he is probably a little banged up but feels an obligation to finish up strong as he always tries to. Yesterday's ceremony was over the top in Yankee style. No gifts or big check for Turn 2? I might have missed that part. I felt bad for Rock Raines and Gerald Williams. They introduced them after the core 4 and O'Neill and Bernie and prior to Ripken and Jordan. A lot fans hardly remember them.

Rock is a hall of famer and it's cool that Ice was there!

6) hunting trip w/sons
7) he was given several gifts: all of his all-star patches in a framed thing, a crystal thing, $222,222 check for his foundation.

i still need to watch the entire ceremony. i've seen bits and pieces and read a lot. so far, i loved it. i love my captain and feel he's deserving of all this. i know it's not a popular sentiment around these parts, but i'm all for the schmaltz and think the yanks do great work with this stuff.