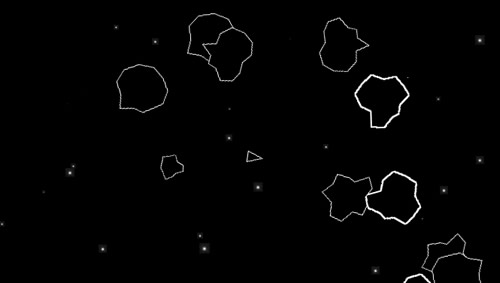 I remember Pong and I remember when my Dad’s friend Marty got Atari and had Space Invaders. Then, at least in my memory, I remember Asteroids coming before Pac Man.

Over at the Daily Beast, I curated a story that David Owen wrote for Esquire back in 1981 on the Asteroids craze. It was the first magazine story Owen ever wrote and it holds up:

It’s lunchtime in Manhattan, and the Playland arcade at Forty-seventh Street and Broadway is crowded. Standing shoulder to shoulder with Playland’s traditional clientele of Times Square drifters and truant schoolboys is what appears to be a full-scale assault team from the corporate tower of nearby Rockefeller Center. You can hardly move from one end of the place to the other without grinding your heel on somebody’s wing-tip shoe. Over near the Seventh Avenue entrance, a tall thin man with a briefcase pressed between his knees is hunched over a flashing pinball table called JAMES BOND. At a change station near the center of the room, a portly lawyer type is converting the contents of his wallet into enough quarters to bribe a congressional subcommittee. There are three-piece suits everywhere. But the densest agglomeration of gray wool by far stands at the very front of the arcade by a long bank of thumping, thundering machines, where a veritable legion of young executives is lined up three deep to play Asteroids.

Asteroids, at the moment I am writing, is the most popular coin-operated game—video, pinball, or other—in the United States. It jumped to the number one spot not long ago by out-earning Space Invaders, a simple-minded but wildly successful Japanese import that swept this country after  creating something close to mass hysteria (not to mention a coin shortage) in Japan. Introduced in December 1979, Asteroids quickly became standard equipment in bars, arcades, and airports all over the country. Tavern owners who had previously been scared away from coin-op games by pinball’s underworld reputation now began to clamor for Asteroids. Atari Inc., the game’s manufacturer, had trouble keeping production in step with demand. There are now sixty thousand Asteroids machines on location worldwide, most of them in the United States and most of them astonishingly popular. Machines in hot locations have been known to bring in as much as one thousand dollars a week, enough to pay for themselves in a little more than a fortnight. Operators who tend fleets of machines are finding they have to make extra trips to their locations just to empty the coin boxes of the Asteroids machines.

As impressive as the sales and collection figures are, one of the most intriguing facts about Asteroids is not how many people are playing it but which ones. Continuing a trend begun by its immediate predecessors, Asteroids has helped open up the coin-op market to a brand-new clientele: not just chain-smoking teenagers with time on their hands but responsible, well-paid men in their twenties, thirties, forties, and even fifties, who in some cases haven’t seen the inside of an amusement arcade since the days when pinball games had pins. And now these men—these sober minions of the gross national product—are backing out of expense-account lunches and sneaking away from elegant restaurants to play Asteroids.

“I’ve pretty much eliminated lunch as an ongoing part of my daily routine,” says a thirty-four-year-old stockbroker. “I’d rather play than eat. Along about four o’clock my stomach begins to growl, but Asteroids has made me a happy man.”

Until the advent of home consoles and PCs, going to the arcade after school (and for some during, of course) was a daily ritual. I can count how many businesses thrived on the fact that there was an arcade nearby; when the arcades disappeared, so did those businesses.

Seems to me the arcade games stood toe-to-toe with the home consoles for years until Sega and Nintendo came in and petty much wiped them all out. Home consoles were something that only a couple families in the neighborhood actually owned and all the kids would come over to that kid's house and play (Atari and Intellivision were the prime consoles of the early-to-mid eighties). But new arcade games were coming out by the month if not the week it seemed, so when kids were old enough they would spend most of their game time at the arcade (remember when Dragon's Lair was next-step gaming?)... Nintendo and Sega changed all of that.

Meanwhile, I was spending time during study hall or in my after school club playing and designing PC games (Zork was the first PC game I fell in love with, and then came King's Quest and Monty's Revenge). And yet with all that, I still had time to play outdoors and on teams with my friends. Go figure...

I think Tempest and Centipede were the first two arcade games that I loved.

[2] My oldest sister and I would have supreme battles over Centipede; she was always setting the high score and I was always breaking them. She was actually the better gamer than I was honestly; she was the first to get hooked on Nintendo and played Super Mario Bros. for days on end. I merely watched others play most of the time and either avoid their pitfalls (in and out of the game) or incorporated some techniques and designs into my own projects.

[3] And, to this day whenever I see a Centipede arcade game at some random joint, I feel obliged to play at least one round >;)