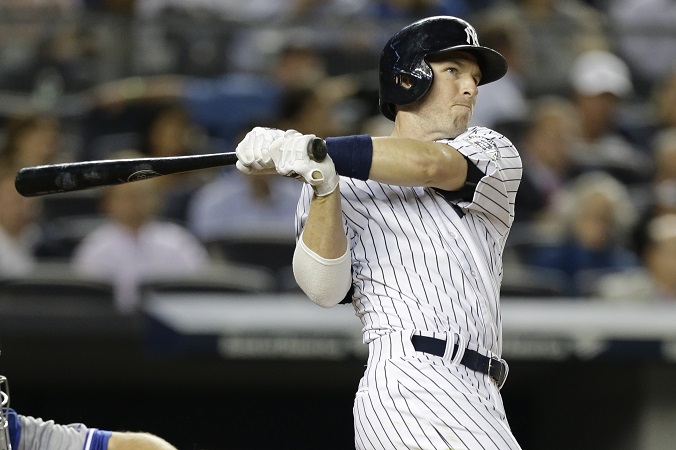 Okay, they don't spend a ton on him and hedge their bets with Refsnyder/Pirela/Ryan, but if he stinks it up he can be cut. If not and the rest of the team stinks, they can trade him for a young prospect. If they all stink, he's either cut or just a warm body to cover for injuries. This is just a hedge; nothing remarkable either way, so it's meh.

I think it is a good move. The last 2 years the Yanks were hit by the injury bug and had to fill in on the fly, but this team is fairly unremarkable unless Tex, Arod and Beltran can turn back time. As long as they take their turns on the DL (inevitably 1 or all 3 will spend time there next year) and share at bats at DH and aren't all out at the same time, this might work.

I think McCann will have a better year, Ellsbury and Gardner will be solid and if Headley plays like he did last year, (and possibly slightly better), we might have a dynamic offense, but they need a lot of things to go right.

The bullpen looks strong, but the rotation looks sketchy. I think CC will disappoint and Tanaka (In my mind) should have had the surgery last year.

As constructed, maybe the Yanks can compete this year, but I have a hard time seeing them as a champion team. Maybe Scherzer or Shields is in the offing?

Depth is a good thing, but this really doesn't do anything for me. If it works, huzzah! If it doesn't, no biggie!

[3] meh is the perfect response.

Meh, but I don't mind a one year small money (and when did $5 million become small money) deal as insurance to allow a year of development. Better than another nine figure ten year deal.

I'm feeling the Meh, esp. Will's [3] version. And it could always be worse. Drew bats left, Ryan right--it might work. Drew could always surprise us and park one in the red seat at Fenway. I'm jazzed about Pirela coming up one day. He only played in seven games last season but his numbers were good.

$5 million is small potatoes compared to the $10 mil+ and/or multi-year deals a slew of other middling infielders are getting, and about a third less than what he was seeking. I'd lhave a nice retirement on $5 million myself, but my market and market value is a whole lot different than theirs.

rbj: Oh, about three years ago.

The Yankees are worth (likely) $2billion or more. They refuse to pay a HOF 2B and now are going to start Steven Drew for $5million a year? Have you seen his stats?

Eff 'em. I'm rapidly losing interest in the Yankees if they're going to penny pinch. At LEAST play some young guys if you're not going all out to win. Seeing guys like Drew and a washed up Beltran is of no interest to me.

[11] Hot Damn! We agree, must be the new year, coming in sheepish and all.

Drew has never done anything spectacular or unspectacular. He just continues to exist like the the sugar, sweet & low and cream that sit ignored by me on the diner table, and fills my take-out bags with garbage, when they forget to ask.

Hes a big lump of nothing on a team full of nobodies in a year that's going nowhere fast.

[11] Refused to pay him what though? The question might not be whether you would or not, but how long would you pay Robbie btw $25-30 million a year? The Yanks offered him a decent value per year, but he wanted more years too; given that they already failed unbelievably with Alex and are suffering from the self-inflicted back ends of CC and Teix's contracts, I still can't blame them for being gun shy on yet another ten-year potential albatross.

But I wouldn't worry too much, I'm sure Cash will find a way to bring Robbie back just when the albatross part of his contract kicks in. Old and past-prime DH platoons are a certified pre-owned Yankee specialty >;)

[13] Dead Horse time, I know. But they Yankees didn't even come CLOSE to the Mariners offer. Yes, the end of deal will be bad but who cares? They could have gone 8 for 220 and at least tried..
The Yankees print money; Cano would have been the new face of the team, the next Hall of Fame Player, the next Captain, and most importantly, he's likely to produce stats. Look at the infield this team has now..

At least Tanaka, Pineda and CC will keep me interested a bit but...

Oh, and A-Rod will be good for some taters and hi-jinks. :)