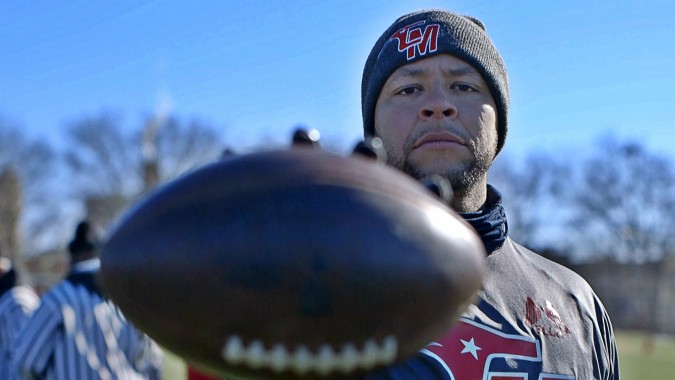 On the FDR Drive overpass by lower Manhattan’s Houston Street, a group of men begins assembling an hour before nightfall one steamy Thursday in late June. Some come from security, construction, or livery jobs, others from long subway rides or carpools from the Bronx or Spanish Harlem. A few have brought wives and children.

Ranging in age from 19 to 51, short and wide to superbly conditioned, they seem a ragtag group, but for the cleats around their necks, the footballs a few carry, and the insults, bro-hugs and daps they exchange as their number swells to a dozen and they head into the Baruch Projects and its 75-year-old playground. More than 90 minutes of grueling calisthenics and sprints in the shadow of the Williamsburg Bridge, it’s clear this is an elite, disciplined group: These practices are every Tuesday and Thursday night it’s not raining or snowing, 40-plus weeks a year. As twilight falls, passersby ogle the regimented testosterone on field, though not for long: The spectacle of men bonding to face the realities of barrio life is fairly common, and it rarely lasts.

These guys do, because they’re Carver Mobb — the name from Spanish Harlem’s George Washington Carver Projects, where the core half-dozen grew up in the 1970s. A team for 21 years, they’ve been the powerhouse of New York’s half-dozen seven-on-seven rough-touch football leagues for a decade. Essentially two-hand-touch taken to bloodsport level, with two 25-minute halves, a mostly running clock, and referees to nominally control the mayhem, it’s the closest these weekend warriors will come to professional sport, though many are high-caliber athletes. Most played high school ball, but only a half-dozen of the 200-plus devotees I’ll meet made it to college; two were walk-ons for the New York Giants or Jets, one played semi-pro in Coney Island, another plays Arena football.