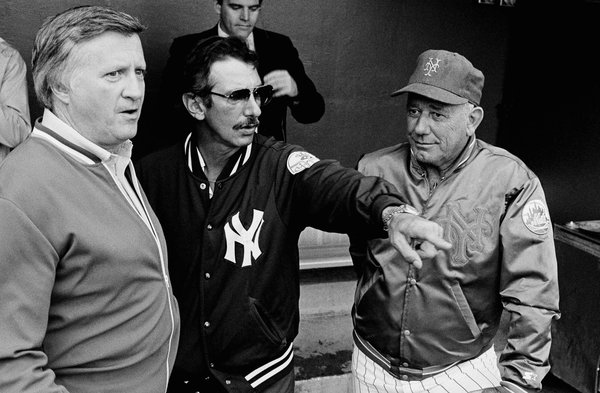 Head on over to the Village Voice and check out this brief history of the Mayor’s Trophy game by none other than our chum, Diane Firstman:

The Mayor’s Trophy Game actually dates back to 1946, when the New York Giants and Yankees agreed to play a best-of-three exhibition during the season to benefit sandlot baseball programs, with the winner to receive a trophy from Mayor William O’Dwyer. The best-of-three format lasted one more year before switching to a single-game event each season, with the Yankees opposing either the Giants or Dodgers until both teams left for the West Coast after 1957.

The series was revived in 1963, the Mets’ second year of operation. The Yankees, coming off their thirteenth World Series appearance in sixteen years and twentieth championship since 1923, were the most successful professional franchise in American sports, playing in one of the most recognizable stadiums in the world. They meant business on the field, and their fans expected nothing less than a pennant each year.

The Mets, on the other hand, were lovably inept. As an expansion team in their second season, their roster was littered with other teams’ castoffs and players either way past their prime or never having experienced one. The loss of the Giants and Dodgers left a huge hole in the New York baseball scene, and for a certain segment of fans, the Mets were the logical replacement to root for. Their fans skewed younger, and this “New Breed” of New York baseball fan developed the tradition of bringing homemade banners fashioned from bedsheets to the Mets’ first home stadium, the Polo Grounds.