BGS: When Harry Caray Was A Rebel With The Microphone 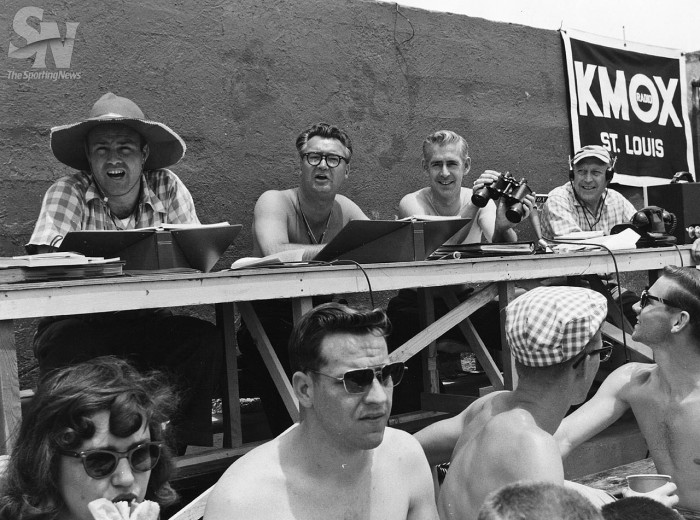 Over at the Stacks I’ve got a fun one fuh ya–Myron Cope’s 1968 SI profile of Harry Caray:

Even before the World Series got under way Wednesday, it was shudderingly clear that one result was as predictable as bunting on the commissioner’s box: Millions of television and radio listeners, whose eardrums may have healed in the year since the Cardinals-Red Sox Series, are once again going to be exposed to a feverish clamor coming from a Cardinals delegate to the NBC broadcasting team. It was equally certain that across America the baseball public would then divide into two camps—those who exclaimed that by God! Harry Caray was almost as exciting as being at the park, and those who prayed he would be silenced by an immediate attack of laryngitis. Caray, should you be among the few who still have not heard him, is an announcer who can be heard shrieking above the roar of the crowd when a hitter puts the ultimate in wood to the ball: “There she goes…! Line drive…! It might be…it could be…it is! Home run…! Ho-lee cow!” You may not know that with a second home run his more dignified colleagues have preferred to flee the broadcasting booth before the ball has cleared the fence.

In the past decade the trend of play-by-play broadcasting has been decidedly in the direction of mellow, impassive reporting, a technique that strikes Harry Caray as being about as appropriate as having Walter Cronkite broadcast a heavyweight championship fight. “This blasé era of broadcasting!” Caray grumbles. “‘Strike one. Ball one. Strike two.’ It probably hurts the game more than anything, and this at a time when baseball is being so roundly criticized.” Never one to burden himself with restraint, Caray more or less began hoisting the 1968 pennant over Busch Stadium clear back in early July when, following a Cardinals victory, he bellowed, “The magic number is 92!”

The fact is that Harry Caray’s 24 years of broadcasting St. Louis baseball have been one long crusade for pennants, a stance that might be expected to have endeared him to all Cardinals past and present, but which, on the contrary, has left a scattered trail of athletes who would have enjoyed seeing him transferred to Ping-Pong broadcasts in Yokohama.

“What’s Caray got against you anyway, Meat?” asks Mrs. Jim Brosnan in a passage from The Long Season, a reminiscence her pitcher-husband wrote in 1960.

“To hell with Tomato-Face,” answers Brosnan. “He’s one of those emotional radio guys. All from the heart, y’know? I guess he thinks I’m letting the Cardinals down, and he’s taking it as a personal insult.”

“Well, you ought to spit tobacco juice on his shoe, or something. It’s awful the way he blames you for everything.”