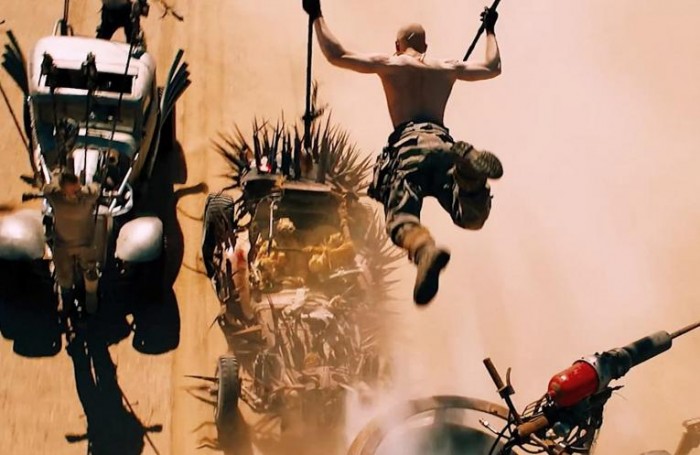 This one goes to eleven.

Remember the old Bugs Bunny cartoon where the airplane is plummeting to the earth and we see the numbers on the speedometer getting higher and higher, faster and faster and finally it says: “Silly, isn’t it?”

I kept waiting for a cutaway to that line as I watched Mad Max: Fury Road. There were moments that I laughed out loud because there’s a Looney Tunes quality to the movies’ craziness–I don’t know what other response you can have. I didn’t find the movie thrilling or suspenseful or even tense. There are some scary moments, but nothing that freaked me out. I felt excited in an over-caffeinated way, but it’s so over-the-top, so fantastic, I almost immediately felt detached and after about 15, 20 minutes, bored. It’s magnificent but not for me.

I was talking to a friend recently about appetites and he called himself a pathological maximalist. Forgive the pun, but I kept thinking about that as I watched Fury Road.

The ads boast that the movie was made by “Mastermind” George Miller and that’s no stretch. This isn’t the work of a director. This is a finely tuned, well-realized orchestration from a mastermind. It’s not pure chaos. There is a keen sense of pacing, there are quiet scenes, with breaks in the action, but really I thought the whole thing was akin to watching two-plus hours of slam dunk highlights. It’s an extended guitar solo, an orgy of technical virtuosity, one stunt more improbable than the next. The technique is formidable and some of the images are captivating–though I dare you to recall any specific images after being bombarded by so many. But the story–which at times suggests Thunderdome as much as The Road Warrior–is corny despite its admirable political sensibility. The dialogue is so sparse that it is easy to laugh at–B-movie fromage. The early movies had that quality too but they also had more of a low budget vibe, a punk vibe. This is Cirque du Soliel, this is Vegas, Grand Theft Auto. Miller’s left punk behind. This is rock opera video game for the hyper modern age.

I’ve read Tom Hardy, who plays Max, say that he had no idea what Miller wanted him to do during filming and I think that comes across. Not that it matters–Max is just an action figure who is playing the role of second banana (the lead is played by Charlize Theron). But it’s too bad because I liked Mel Gibson’s tortured hero of the early movies. (And I liked his dog.) There is nothing of the immediacy and realism of the first two movies here. Even if they were cartoons, there was a semblance of credibility, too Here, Max is captured, chained, and when he breaks free, instead of collapsing from fatigue, he springs to life like the Hulk.

I suppose this movie is in step with the times. Maybe that’s why the critics have fallen all over themselves writing about it. How can you ignore not admire such technical brilliance? But this is the kind of roller coaster that doesn’t appeal to me. It’s remarkable and if you like your thrills and spills larger than life you’ll dig it.

The rest of you can spare yourself the pounding.

I pretty much loathe all recent action films and I've seen this one twice. I loved it.

I will also say that the second time through, the story worked better for me. I picked up on things in the script early on that gave the rest of the film more resonance.

I don't think Max is an action figure, he's the audience surrogate. The War Boys continually ask each of each other "Witness me!" before throwing themselves (fatally) in harm's way. Max is our witness - it's Furiosa's story, told by Max.

I should say I was skeptical, too. I went in with a real "Oh this BETTER be good" attitude and it didn't initially click with me for the first few scenes.

I liked Glenn Kenny's piece on the movie: http://somecamerunning.typepad.com/some_came_running/2015/05/mad-max-fury-road.html

2) Maybe Max is an audience surrogate but I thought he was dull, dull, dull, which was a change from the original Max. And I didn't find Furiosa that much more interesting either. And the beautiful mothers, especially that first shot of them drinking water, man that was so corny, like something out of a Brian DePalma movie. I liked the old lady warriors and the big bad guy had a scary mask. But all that silver spray paint stuff? Eh. Just seemed silly.

Thanks for the review link. I'll check that out. Who knows, maybe I'd enjoy it more a second time. I certainly wouldn't pay to find out though.

Oh, I'm not trying to convert you - you clearly weren't into losing yourself in that world - just saying I really, really dug it and not just Miller's staging (which is pretty incredible).

4) I'd like to see Lorenzo's Oil again. I recall that Nolte's accent was a distraction but one that was admirable too because it was true to the character. I never did see Miller's animated movies. The new Mad Max felt like a live action animation mash-up.

You eager to see the new Clooney flick?

I had a text discussion with a buddy of mine about this; he taking the "It's GLORIOUS" side and me the "Eh, it's good, but no classic" side. He posted our conversation to his blog (wasn't thrilled that he ended the conversation there as opposed to in our texts), but in short, there are a few ways you can read into each character's motivation; what you get is what you likely what you want to get from it. Strange that this movie could be that flexible, but it was not a wasted ticket in my view.

[5] Funny you say that; the last thing I said to my buddy in my initial text about Mad Max was that I'd like to see Miller direct a live action series of "Full Metal Alchemist: Brotherhood"; Mad Max definitely had an anime feel to it.

Miller says there are more Mad Max movies coming, and he did leave things nicely open for the next chapter, with Hardy as Max somewhere out there in the wasteland again.

I liked that the film let the audience fill in some of the blanks, honestly. It kept my wheels turning, especially in this age of WAY TOO MUCH EXPOSITION.

The being bored I can't relate to - much like THE ROAD WARRIOR, I spent large chunks of the movie sitting on the edge of my seat.

8) Good point about the exposition. The movie is packed but it also felt taut, nothing wasted, from dialogue, to the cutting. But I had the opposite reaction to The Road Warrior where I felt there was a certain reality that I bought into. This one, from the start, pushed me away and so I was never gripped by it.