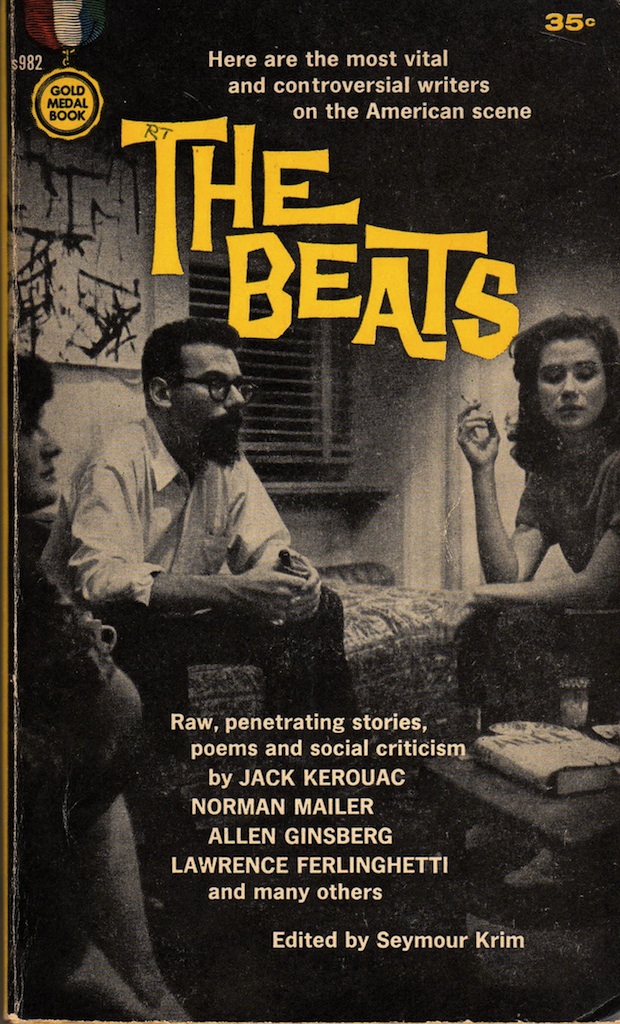 The latest reprint over at the Beast is a rich piece of ’60’s pop culture criticism from the inimitable Seymour Krim. All about Jack Kerouac:

As an Outsider, then, French Canadian, Catholic (“I am a Canuck, I could not speak English till I was 5 or 6, at 16 I spoke with a halting accent and was a big blue baby in school though varsity basketball later and if not for that no one would have noticed I could cope in any way with the world and would have been put in the madhouse for some kind of inadequacy…”), but with the features and build of an all-American prototype growing up in a solid New England manufacturing town, much of Kerouac’s early life seems to have gone into fantasy and daydreams which he acted out. (“At the age of 11 I wrote whole little novels in nickel notebooks, also magazines in imitation of Liberty Magazine and kept extensive horse racing newspapers going.”) He invented complicated games for himself, using the Outsider’s solitude to create a world—many worlds, actually—modeled on the “real” one but extending it far beyond the dull-normal capacities of the other Lowell boys his own age. Games, daydreams, dreams themselves—his Book of Dreams (1961) is unique in our generation’s written expression—fantasies and imaginative speculations are rife throughout all of Kerouac’s grownup works; and the references all hearken back to his Lowell boyhood, to the characteristically American small-city details (Lowell had a population of 100,000 or less during Kerouac’s childhood), and to what we can unblushingly call the American Idea, which the young Jack cultivated as only a yearning and physically vigorous dreamer can.

That is, as a Stranger, a first-generation American who couldn’t speak the tongue until he was in knee pants, the history and raw beauty of the U.S. legend was more crucially important to his imagination than it was to the comparatively well-adjusted runny-noses who took their cokes and movies for granted and fatly basked in the taken-for-granted American customs and consumer goods that young Kerouac made into interior theatricals. It is impossible to forget that behind the 43-year-old Kerouac of today lies a wild total involvement in this country’s folkways, history, small talk, visual delights, music and literature—especially the latter; Twain, Emily Dickinson, Melville, Sherwood Anderson, Whitman, Emerson, Hemingway, Saroyan, Thomas Wolfe, they were all gobbled up or at least tasted by him before his teens were over (along with a biography of Jack London that made him want to be an “adventurer”); he identified with his newfound literary fathers and grandfathers and apparently read omnivorously. As you’ll see, this kind of immersion in the literature of his kinsmen—plunged into with the grateful passion that only the children of immigrants understand—was a necessity before he broke loose stylistically; he had to have sure knowledge and control of his medium after a long apprenticeship in order to chuck so much extraneous tradition in the basket when he finally found his own voice and risked its total rhythm and sound.