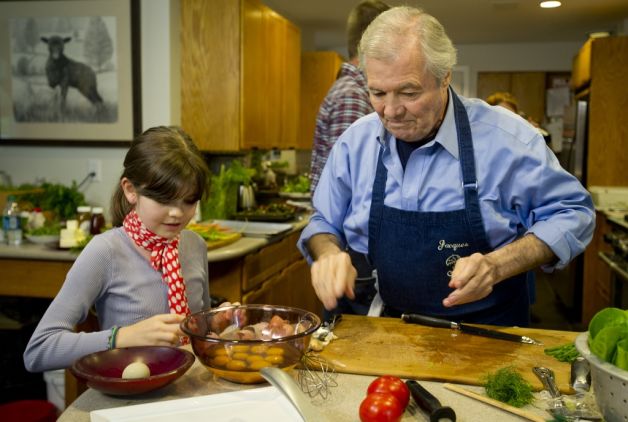 Couple of off-days before baseball starts again. No better time to catch up on some reading. Here’s a GQ story by Brett Martin about a couple of encounters with one of our heroes, Jacques Pepin. Think you’ll enjoy:

We sat at a table at L’Ecole, a few feet from where our first meal together had been. A woman approached the table, one of a stream throughout the evening, to say hello and thanks for a cooking lesson she had attended years before. Pépin ordered some wine and bread—requesting the hard heel of the loaf—the croûton—which, to his chagrin, he had noticed being thrown out the day before.

“This is my favorite part,” he said, cradling a handful of crumbs in his hand and shaking them ruminatively, like dice, before funneling them into his mouth.

We ordered charcuterie and homemade cavatelli with rock shrimp and two whole Fourchu lobsters—a special variety found only in the cold waters around an island in Nova Scotia. The ICC was housing a pondful of them somewhere in Bushwick.

We talked about the state of modern chefdom. He was clear-eyed but uncranky. The undercooking of everything, especially vegetables, drove him crazy. So did excessive culinary piety: “I’ve been in restaurants where they bring over a carrot and say ‘This carrot was born the ninth of September. His name is Jean-Marie…’ Just give me the goddamned carrot!'” Young chefs, he said, had become overly concerned with self-expression. Nouvelle cuisine had been about many things: fresher ingredients, new techniques, a sensitivity to place and season, healthier preparations, creativity, innovation. Out of all those mandates, chefs sometimes seemed to have only heard the final two. “That’s how you wind up with a slice of rock salt in a bowl of raspberry ice cream,” he said.

He sighed. “But we tend to do that. This is America. We go totally from one end of the spectrum to the other end.” In the end, the job was still and would always be the same. “We are the mashed potato makers,” he said. “We are here to please people.”

I met Jacques Pepin over 40 years ago, when he was assisting James Beard at Beard's home office on 12th St. Beard was our spokesman for a DuPont Teflon commercial that we shot in his kitchen and ran briefly during 1973-74. I was an Account Exec at Ayer at the time. The only thing I remember about the spot (other than James' bad acting), was his insistence that we use his well-worn knife table during the shoot.

Back then Jacques was very quiet. I've followed his wonderful career ever since!

[1] Cool story. I guess his knife was still sharp

My recollection is that Beard was not a pleasant man...

Yeah, I've heard that too about Beard. Jacques is my MAN, though. His memoir, while not being especially well-written, is charming.

yea i really like jacques pepin too.
i have learned a lot of good tips and techniques from watching his shows.
i keep laughing at the though of mnsr. pepin telling the story of the carrot being called "jean-marie."