The Selling of The Babe 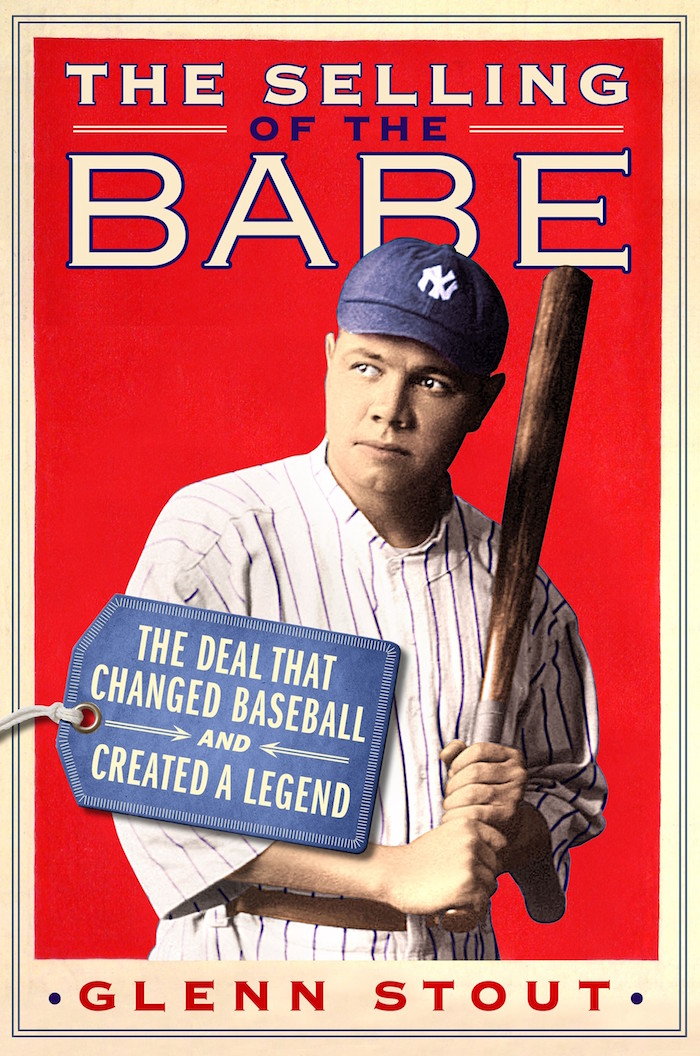 Longtime Banter pal, Glenn Stout’s got a new book out and I think you’ll dig it. Here’s an except to whet your appetite. I’m sure you are gonna like this.—AB

Entering May of 1920, Ruth’s inaugural season in New York and that of the Yankees was at a crossroads.  Ruth was hitting .226 in nine games with only a single extra base hit and one walk. The only record he was pursuing was the strikeout mark. With eight in 32 plate appearances, he was on pace to strike out more than 130 times for the season.  To date, no one had ever approached 100.  In nearly 600 appearances in 1919, Joe Jackson had struck out only 10 times and only 234 times for his entire career. Strikeouts were okay only if they were countered by home runs.

It was even worse than that.  The Yankees were only 4–6, still in sixth place. Boston?  Minus Ruth, they were a stellar 9–2.  The press was referring to them as the “Ruthless” Red Sox, fully aware of the irony the name entailed.  If there was truly a “Ruthless” team thus far, it had been the Yankees.  So far, Ruth had been a hit only at the box office, but if he didn’t start banging the ball soon, one had to wonder how long that would last.

For Ruth, the 1920 season was shaping up as a repeat of 1919, only this time he was wearing pinstripes.  Once more, just as his slow start in 1919 had buried the Red Sox, Ruth’s por performance thus far threatened to bury the Yankees, risking that whatever he did later in the season, no matter how spectacular, might be diminished.  He had been given a pass on that in 19 19, but if the same thing happened in 1920 it was unlikely to go unnoticed a second time. That was the problem with all the press in New York.  When they were on your side, it was grand, but they could also gang up on you.  More than one Yankee manager had felt their wrath.

Although the Yankee–Red Sox rivalry was not as pronounced as it would later become, each team already considered the other its main rival. The Ruth sale put an accent on that, at least in the minds of the fans.  For Boston, 9-2 on the year, coming into New York in first place was a familiar feeling. Since the founding of the American League the Red Sox, despite lacking the resources of New York City, had been the team the Yankees one day hoped to be, a champion and near annual contender.   So far, with the Yankees sixth at 4-6, already 4 ½ games out, nothing had much seemed to change.

In game one, on April 30, it appeared as if that would hold.  Before a sizable weekday crowd of 8,000 who turned out despite intermittent showers, the Red Sox tried their best to put their foot on the Yankees’ neck.  After all, a five-game sweep would virtually ruin New York, and put them in the same position the Red Sox had been a year ago, likely too far back to climb into the race.

Ruth did his best to prevent that in the first inning, cracking a single to knock in a run and give the Yankees the lead, but that was to be his only hit of the day.  Waite Hoyt settled down and Boston went to 10–2 for the season with a 4–2 win, as the Yankees fell to 4–7.

The only other notable occurrence came every time Ruth ran out to right field, and every time he ran back in.  In only his third appearance in the position at the Polo Grounds, fans packed the right field bleachers to get as close as possible, a disproportionate number compared to the rest of the stands.  Every time Ruth ran out to take his position, they cheered and applauded madly.  And every time he left them, they cheered again. The same thing happened when he stepped out of the dugout, or into the batter’s box, or scratched his nose. He hadn’t even done anything yet and was getting twenty or more standing ovations a day. One writer termed it “The Babe Ruth roar. . . . Down as far as 125th Street [in] Harlem folks can now tell when Ruth comes to bat.  The roar shakes the whole vicinity. The fans roar for Babe to hit ’em and when he misses fire they roar because he didn’t.”  In this game, it was more the latter than the former.

Shawkey, the Yankees’ ace, took the mound the next day, May Day.  Thus far, although he’d pitched well, he was 0–3—the Yanks had scored more than three runs only once all season.  Offense was up everywhere, it seemed, other than in the Polo Grounds.  Those Ruthless Red Sox, in contrast, were scoring runs at a frightening rate.  So far, they had been held to three runs or under only three times.  The rest of the time, they were clubbing teams to death like defenseless rabbits, and giving ammunition to those who still favored the scientific approach.

This, time, however, Shawkey was sharp from the start.  The only question was whether the Yankees could take advantage.  They scored one in the first—Ruth reached on a force-out, moved around to third, and then, on a ground ball to Everett Scott, Ruth deked his old shortstop into thinking he was staying at third, then timed Scott’s throw to first perfectly, taking off for home and beating Stuffy McInnis’s throw to the plate.  Although Ruth was never quite the ballplayer who “never made a mistake on the field” as the hyperbole later suggested, he was a smart player, surprisingly quick for his size—particularly before he ate his way through half of Manhattan—and he knew baseball.  Hundreds of games played at St. Mary’s had developed his instincts beyond his years.  If anything, Ruth was sometimes too aggressive on the bases, overestimating both his speed and his ability to surprise.

He did it again in the fourth. Ruth rapped a hard liner between McInnis and first base, the ball passing the bag fair, then it hit the ground, then skipped to the wall, where it caromed off the concrete base and sent Harry Hooper racing after as Ruth pulled into second for a double.  He wisely moved to third on an infield out and then, after Pratt grounded to second, Ruth timed a dash home again.  It was closer this time, but he made a splendid fall-away slide, his foot sweeping across the plate as the catcher spun and reached out to make the tag.  The Yankees led 2–0, and so far it was all due to Ruth.

Something was building, you could tell.  If he had been bothered by any lingering discomfort from the pulled muscle he’d suffered at the start of the season, the slides proved either he was healed, or the injury taped, or somehow masked over.  Ruth was feeling no pain.

Pennock struck out Pipp to lead off the sixth, bringing up Ruth, who was greeted with the now customary histrionics, this time even a little louder due to his performance in the first half of the game.

Pennock threw one pitch and a sound like no other rocketed through the park.  The ball went up and up and toward right field.

What happened next released a deluge of adjectives and adverbs from the New York press, verbiage they’d been sitting on since the first week of January.  Now that they had a chance to use it, they didn’t stop.

The embellishment prize went to George Daley, writing under the pseudonym “Monitor” in the New York World:

Ruth strolled to the plate, decided it was time to OPEN THE SEASON and sunk his war club into the first ball Pennock tried to pass over the plate.

There came a burst of thunder sound: that ball, oh, where was it?  Why clear OVER the right field roof of Brush Stadium [the Polo Grounds] and dropping into the greensward of old Manhattan Field around the junction of Eighth Avenue and 156th Street—the longest drive they say EVER seen on the P.G. and longer even that the tremendous wallop that gave Babe his twenty-ninth homer last September.

Whew.  What he meant was it left the field between the third and fourth flagpole atop the roof in right field and landed in the park next door, only the third ball ever to leave the yard, as Ruth joined himself and Joe Jackson as the only prior practitioners. To be fair, the ball was driven about 400 feet when it left the park, although no one could say with any certainty whether it struck the top of the roof or sailed cleanly over it.  The grandstand roof was some sixty feet above the field, but its front edge, where the ball passed over, only a bit more than 300 feet from home.  Regardless, it was still, in the parlance of the day, “a prodigious blast” and “fierce clout,” absolutely “lambasted,” one that “flitted out of the park,” “a bomb.”

It also gave the Yankees a 3–0 lead.  A moment later, while the fans were still cheering, Duffy Lewis, up next, duplicated the feat, although in much more mortal fashion, smacking a home run into the left field bleachers.

That occurrence, back-to-back home runs, was so rare no one could recall it happening before.  Two consecutive home runs?  Both OVER the fence?  The lively ball needed no more proof.

Ruth’s home run, his first as a Yankee, was the one he needed most.  Now the dam was broken, now everything he was supposed to be, he suddenly was, now the pressure was off and the game was fun again.  Now he was, unquestionably and everlastingly, the Babe. The remainder of his career fell beneath the shadow of what was to come.

After the game, a 6–0 Yankee win, the press noted that it was Ruth’s 50th career home run.  Heck, Ty Cobb, who had been playing since 1905, only had 67 career home runs.  Home Run Baker had just 80.  Ruth already had 50.  He had only hit one home run as a Yankee and the press was already setting goals and targets.  They would do so for most of the next fifteen years.  Hardly anyone even mentioned that the victory might prove a turnaround for the team. The Babe was all and everything.

In case no one had noticed, the next day Ruth did it again, as the Times noted, “At what was known in the old days as an opportune time.”  In his first two times up, he collected a “mighty” strikeout (they all were “mighty” now) and then lofted a “near home run” (just about any deep fly ball) before coming up in the sixth with two on and the Yankees trailing 1–0.

After a swinging strike and a foul tip off Sam Jones, his former teammate tried to sneak one past . . . and failed.  This was no blast over the roof but a drive down the line. But even that wasn’t special enough. It was described as “the lowest and fastest home run drive uncoiled in the Harlem park in years,” maybe the shortest of Ruth’s career, sneaking over the fence and into the upper deck just fair of the iron foul pole, 258 feet away.

It didn’t matter to the fans, 25,000 of whom filled the park, the second home Sunday date of the year, bringing the Sabbath total to more than 50,000. As Ruth rounded the bases, they climbed on the dugout roof and tossed papers and hats onto the field.  There were even reports of celebrations emanating from the apartment windows of buildings on Coogan’s Bluff.  Even the Polo Grounds stage wasn’t big enough for Ruth.

The countdown began the next day.  The Times noted, “Babe needs only twenty-eight more

homers to beat the big record he set last season. At the rate of one a day that mark won’t last