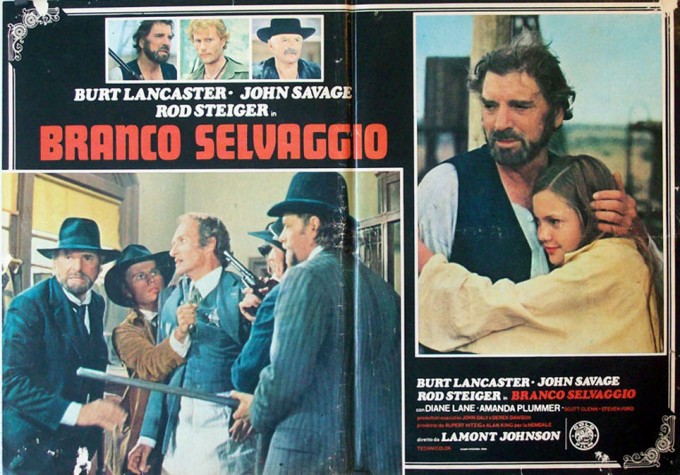 [Our old pal Robert Ward has been telling a story about Rod Steiger for years and he’s kind enough to drop by and share it with us. For some good ol’ on location movie fun, check this out.—Alex Belth]

I was in Durango, Mexico in the 70’s on the set of a movie I had written called Cattle Annie and Little Britches, a comic western starring Amanda Plummer as Cattle Annie and Diane Lane as Little Britches. The male stars were Burt Lancaster as Bill Doolin and Rod Steiger as Bill Tilghman, the sheriff who hunts the gang of outlaws down. The whole tale was pretty much true, about the teen aged girls joined the infamous Doolin Dalton Gang. They were smarter than the boys and ended up planning their robberies.

The shoot was going fine until Rod Steiger showed up. He and Lancaster hated one another because of some financial matter, which had transpired years back when they were going to be in the movie making business together. Apparently, Rod pulled out at the last minute and the whole project nearly fell apart. Lancaster kept it together with other people but there was still bad blood between them. Perhaps that was part of the reason for the ghastly things that transpired that night. That and the fact that Steiger was on the down side of his career and was feeling vulnerable.

In any case we held a first night “welcome to the movie ” dinner party for Rod at a real Mexican restaurant in down town Durango, with real Mexicans in it. Everyone but the movie people and Rolling Stone writer Jack Hicks were local folks. The party started on time but Rod showed about a half hour late. He was seated in the middle of the table next to some of the gang members, cowboys like Kenny Call, who had won every major rodeo award known to man. Rod objected to this seating and demanded to be at the head of the table where the producer Rupert Hitzig was sitting. Under his breath he mentioned his Academy Award for “The Pawnbroker.” Rupert happily gave up his seat to Rod, who was now sitting next to me.

We all started eating, and drinking, trying to forgetthe nasty vibes Rod had laid on the gathering. Things seemed ok, until this young girl got up with her guitar. She was about 14, and sang these earnest love songs in Spanish walking among the tables as she warbled.  She was young, beautiful and her songs were heartfelt. Everyone loved her, the Mexican patrons, and our table applauded fiercely. Everyone but one man, Rod Steiger. He looked at me and said, “Do you see what she’s doing?” I said, “Yes, she’s singing a song and doing it quite well too.” Rod glared at me  and said “No, she is trying to destroy me! I heard you play the guitar today Ward. Get it from her. We have to top her!”

I tried to reason with him. “Rod, you’re a international movie star. You don’t need to compete with a 14 year old girl.” Rod looked at me, said “You obviously know nothing about competition. You must always compete with anyone who tries to top you.”  Reluctantly, I asked the girl if we could borrow her guitar. She was happy to loan it to us. I sat down and started playing some blues licks and Senor Rod got up and began to improvise a blues song which sounded like something Sophie Tucker might have sang.

Hideous would not be too strong a word to describe his singing. He pranced through the tables, sometimes hitting them, and upsetting glasses of wine and beer. Yet, the patrons were kind and clapped for him, some even yelling “Hooray for Senor Rod.” He sat down and smiled in a victorious way and we all began to eat again.

It was then that I noticed these four swarthy Mexican workers staring at us. These guys were muscular and wore grimy shirts. They had obviously just come off some tough job. They didn’t like Senor Rod. They didn’t like me, the guitar player, I was pretty certain. I tried to ignore them. Everything seemed to cool down. That is, until the girl got up and sing again. This time she sang the song of her native town, Durango. Heartfelt sentiments about her home, city of her family, city of her heart. People went crazy whistling, yelling.

Senor Rod looked at me. “Get the guitar, Ward. You don’t understand, we can’t give in!” I looked at Hitzig who whispered that I had to play or Rod might not show up tomorrow to say his lines! So I borrowed the guitar again, feeling like the biggest ass in Mexico. This time Senor Rod got up on the floor and poured Cognac into people’s drinks as he waddled around  singing more of his horrible, show tune blues. This time there was practically no applause and the four tough workers glared at all of us. It was now obvious to everyone in the place that Rod was trying to top the local heroine. And failing miserably.

Everyone in our party felt that disaster was about to strike us all so we paid the bill and ran out to the cars which waited to take everyone to the safety of the set encampment. A few seconds later everyone was safely whisked away. That is, everyone but Rolling Stone reporter Hicks and yours truly.  We were mere writers after all. Who cared what happened to us? So we were left out in the street outside of a restaurant where inside lay a gang of Mexicans who rightly hated us as the ultimate Ugly Gringos. I prayed a little: “God, don’t let that door open until we can call for a cab.” I put pesos into the pay phone on the corner and waited. And then it happened.

The door to the cafe opened and the four Mexican hardasses who had been eyeing us all night, stepped out, and walked toward us. They walked in lockstep and looked like they were out to kick some serious American butt. As they got closer I whispered to Hicks, “This is it man. I’m hitting the first guy and you get the guy on his left” “What then?”Jack said. You’re your ass off.” Was my clever reply. They came closer, closer still and then the toughest one stopped, only a foot away from me. He stared into my eyes and said: ” Hey man you play Chuck Berry?”

I was so stunned by this friendly request I almost answered with the a hostile reply. Then I heard what he had actually said. Stunned, I smiled and said, “Hell yes, I do.” He smiled and said, “Then come on back in. Let’s have some fun, man!”  And Hicksie and I went back in with our new amigos, and played all night. As we drank and sang “Maybelline,” the toughest one, Julio, looked at me, laughed and said, “You know Bobby, we all knew you hated Senor Rod as much as we did.” They were right, I did.