The Anatomy of a Memoir 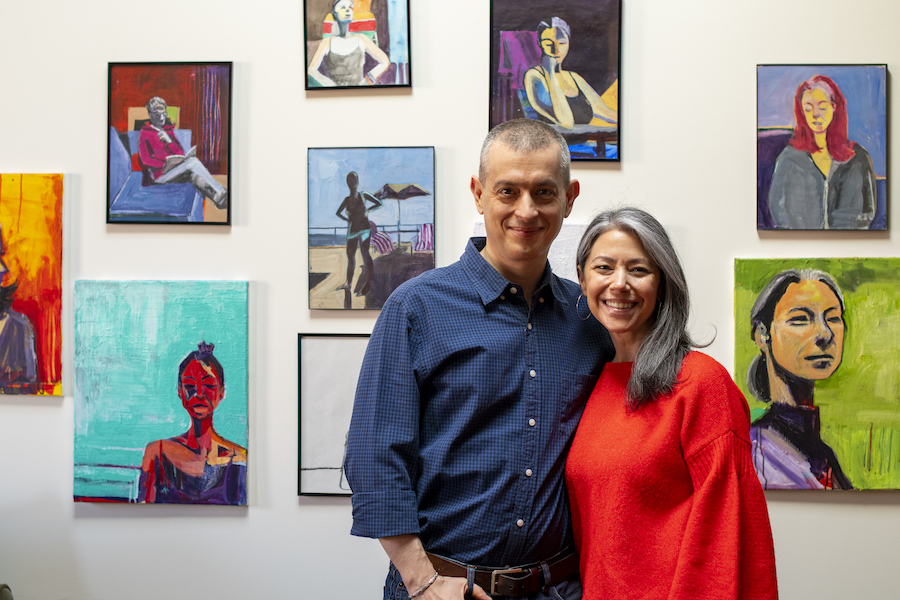 Deep into Here I Are: Anatomy of a Marriage, an Audible Original released last week, Alex Belth describes his wedding to co-writer Emily J. Shapiro. It was a private ceremony on a Caribbean island, the type of wedding you see in the closing scene of a romantic comedy that makes you wonder why you bothered with the stress of a hundred and fifty guests and three entrées and a petulant flower girl. The smart ones elope to paradise.

But buried in the beauty of that moment lies a metaphor that’s likely unintentional. Alex spins a charming tale – Alex and Emily are both charming throughout – about how nervous he was walking from the beach to the end of the pier where the ceremony would take place, worrying with every step that the heirloom ring meant for Emily’s finger might slip from his hand and fall through a gap between the planks of the wooden pier, never to be seen again.

When we think about walking a plank, images of pirates and circling sharks come to mind, or perhaps a ship’s captain falling victim to mutiny. I don’t mean to compare a marriage to such a morbid scene, and neither would Alex or Em, but there is something in that moment to which any of us who have walked down the aisle – or a pier – can relate.

While the captured pirate might take those final steps under threat of a drawn sword, the happy couple is equally powerless, driven by their beating hearts and intertwined souls. But here’s the irony: no matter how deep the love, no matter how committed the mind, each couple walks this plank and takes this leap knowing that the future is uncertain. And like the pirate, they must ask themselves a simple question: dare we look beyond the end of the plank?

In this beautifully produced memoir, Emily and Alex take us on an intimate tour of their marriage, shying away from nothing, illuminating everything, looking fearlessly over the edge. It’s a project more than two years in the making, stemming from a seed planted long ago in an article Alex wrote describing his role as husband and caretaker to Emily as she struggled first with panic attacks and Crohn’s disease and later debilitating vision issues.

The two of them have expanded that original article into a two-and-a-half-hour expedition, beginning with their cautious courtship, continuing through the early days of their relationship, and extending into a marriage that has not just survived but thrived.

Structured in a series of alternating interviews, the piece feels less like a book than an afternoon with friends. As Emily describes her numerous hospital visits or Alex admits to childhood issues that have lingered into adulthood, something remarkable happens. The two of them draw the listener in, laying out their intertwined stories and memories with such vulnerability and confidence that the exercise feels less like the dissection of a marriage and more like a coffee klatch. You picture yourself sitting at their dining room table, and when the narrative switches from Alex’s discussion of his father’s drinking problems to Emily’s explanation of why she didn’t want to have children, you imagine that Alex has simply left the room for a moment, perhaps to fetch some cookies from the kitchen.

Without question, the personalities are the strength of the production. I should admit that I’ve known Alex for almost twenty years, but Emily is the star of the show, and probably of the marriage. (Sorry, Alex.) Her matter of fact explanation of her various maladies and her frank discussion of what she’s lost along the way are somehow completely devoid of self-pity; we see her not as a victim of her body’s betrayal but as a survivor always ready for the next fight. Listeners will wish they could undo what’s been done, but not once will they pity Emily J. Shapiro.

Alex and Emily clearly recorded this with hopes of providing inspiration, and they’ve succeeded. As specific and extreme as parts of their journey may be, it is somehow relatable and universal. Any listener who has been married will recognize themselves at some point, perhaps as Alex talks about releasing his need to find solutions to his wife’s struggles or when Emily’s voice softens as she describes her husband’s gentle nature. Listeners who have traveled some of the darker roads described will no doubt find solace and comfort, but even those who have not will feel uplifted.

Here I Are soars because it’s about so much more than medical mysteries and marriage therapy. It’s a love story, something every one of us will recognize. It couldn’t be more familiar. All of us have done what Alex and Emily do here. When one couple meets another, it doesn’t take long before we begin unspooling stories. We stare into each other’s eyes and tell about first dates and near misses, of coincidence and happenstance. We draw sustenance from the sharing of these origin stories, but we don’t usually go deeper than is comfortable. We don’t usually look over the edge.