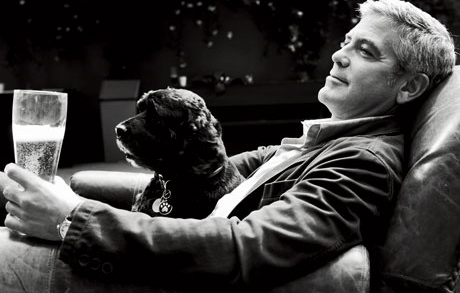 There is a good profile of George Clooney in the latest issue of Esquire. Tom Junod is an expert at this kind of celebrity writing and Clooney is a gracious, professional subject. A lot of insights in this piece but this one stands apart:

You must love him.

For one thing, he’s lovable, professionally so. For another, he leaves nothing to chance. If he can’t win you over with his fame, his charm, and his good looks, he will win you over with preparation. It’s not that he’s needy, like an actor; it’s that he’s competitive, like an athlete. He’s always been good at making people love him; he’s not about to give up his edge now.

Of course, he is not often challenged, and risks the fate of a fighter whose dominance is tainted by a lack of worthy opponents. A few years ago, however, he lost one of his dogs to a rattlesnake. He is a dog guy—a little sign about men and dogs adorns a living-room wall otherwise dominated by signed photographs of dignitaries—and he set about to get another, preferably hypoallergenic. He saw a black cocker-spaniel mix on the Web site of a rescue organization and called the number. The woman who answered said she’d be happy to bring the dog to his house, but then she explained that the dog had been abandoned and picked up malnourished off the street. “He has to love you,” she told George Clooney, “or else I have to take him back.”

At first, he found himself getting nervous—“freaking out.” What if the dog didn’t love him? Then he responded. “I had some turkey bacon in the refrigerator,” he says. “I rubbed it on me. I’m not kidding. When she came over, the dog went crazy. He was all over me. The woman said, ‘Oh, my God, he’s never like this. He loves you.’ ”

He has told this story before. He has even told it to Esquire before. That he tells it again—that it’s the first story he tells—serves to announce what is essential about himself: that he’s a man who will do what it takes to win you over, even applying bacon as an unguent.

I’m seduced and repulsed by charming people. I’m sure Clooney would charm the pants off me like he does with most people. But the turkey bacon story is revealing because it doesn’t just suggest that he’ll do whatever it takes to win you over but that he’s willing to cheat to get there. Beneath the surface there is something desperate about it (“You really like me!”. He wanted that dog and the trainer to like him so much that it was more important than giving the dog the home it needed. What we don’t know is how the dog got along with him after the stunt. Maybe he did give him a good home. Did Clooney bring the dog with him on location? Did a house sitter look after the dog most of time?

We don’t know. The seduction is the thing here not necessarily the reality. 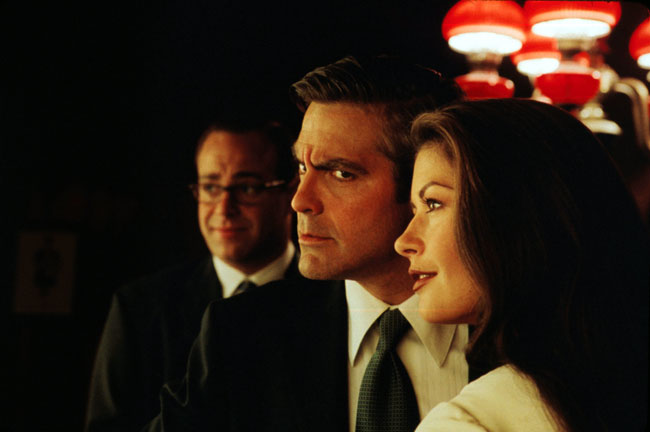 I watched Intolerable Cruelty again recently and really enjoyed it. It’s not considered one of the Coens’ better movies but the acting is sharp and the Coens’ get the screwball down here in a crisp, biting way that was missing from The Hudsucker Proxy (though that movie has its pleasures, too).

Maybe it’s because I think Catherine Zeta-Jones is a fox and because I like George Clooney when he does comedy. Their chemistry works in a way we rarely see in war of sexes movies these days.

Billy Bob Thorton really cracks me up in his small role.

This movie is just a whole lot of fun. One of the very best–if not the best–Elmore adaptation.