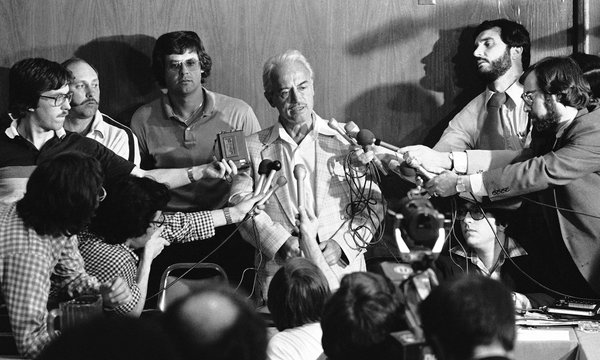 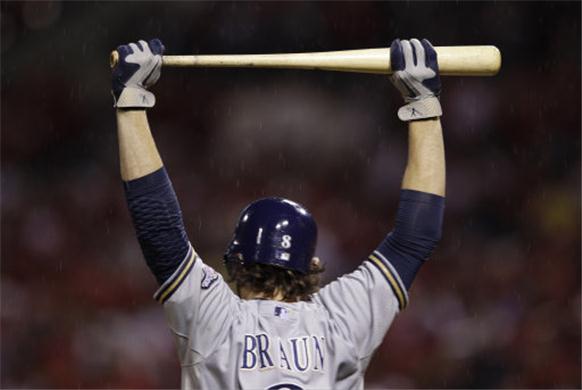 According to ESPN, NL MVP Ryan Braun has tested positive for PEDs. The article also says that according to a source, Braun was tested a second time–after learning of the initial positive result–and that result was negative.

More to come for sure.

After yesterday’s post I realized it was time to stop evading the steroids/P.E.D “witch-hunt” issue and address it head-on in a helpful way. What follows is a case-by-case look at the evidence and facts in the cases of prominent players who have been suspected or accused of using performance-enhancing drugs, and a careful evaluation of their guilt or innocence.

Evidence: Named in the Mitchell Report and accused by former trainer Brian McNamee, currently under  federal indictment for lying to Congress about his P.E.D. use. Head the size of a zeppelin. None of that is definitive, however: we need to look deeper.

Roger Clemens’ win-loss record is 354–184. 3+5+4+1+8+4 = 25. As we should all know from our studies of numerology, 25 symbolizes the Law according to Saint Augustin and the Universal Word of God according to Abellio*. In addition, “According to visions of Ann-Catherine Emmerich, the duration of the trip of the Three Magi was 25 days,” and “Mahomet was 25 years old when he married a widow, named Khadidja.”

Furthermore, one of Roger Clemens’ attorneys is Rusty Hardin. Hardin earned his law degree at Southern Methodist University in 1975. 1+9+7+5 is 22 – that’s right, Roger Clemens’ old uniform number. There are 22 letters of the alphabet in the Pentateuch, and Jeroboam reigned for 22 years. Taking it one step farther, 2+2 is 4, and “number 4 people” tend to be “hard workers” and “dependable” with “a higher purpose in life.”

(*Yeah, I don’t know either. Cursory research indicates that Abellio is either an ancient god worshipped in the Garonne Valley in Gallia Aquitania (now southwest France), or a British bus company. Either way I think that’s pretty conclusive.)

Evidence: Palmiero was born on September 24th, 1964, making him a Libra. Libras are “desperate for the approval of others,” “crave new knowledge” and “set out to accomplish their chosen goals and will find ways to succeed one way or the other.” Ruh-roh. On top of that, Libra is the only inanimate sign of the zodiac.

Evidence: He turned me into a newt!*

Evidence: Back acne, per veteran blogger Murray Chass. In Salem back in the day, midwives used to check suspected witches for “black marks” on the body which might indicate their guilt. So, what we really need to know here is, did this “bacne” consist of whiteheads or blackheads? I have emailed Mr. Chass and eagerly await his response. Until then, we can reach no certain conclusions. (Disclaimer: Chass is not currently a licensed midwife. As far as I know).

Evidence: With Bagwell, we are lucky in that we can apply the immutable laws of tasseography, or tea-leaf reading, to his facial hair over the years. I can clearly see an icicle in many photos of Bagwell’s beard, signifying his being frozen out of the Hall of Fame. In addition I can make out an upside-down Christmas tree, symbolizing Bagwell’s pact with Satan, and wavy lines, which symbolize an uncertain path. According to tasseography experts, owls symbolize gossip, scandal, and aliens, while an ostrich represents travel and “not seeking a truth.” I don’t actually see an owl or an ostrich in Bagwell’s beard but I’m just saying.

Also, while I hate to use guilt by association as an incriminating factor, the following picture is too revealing to ignore:

Clearly, we have a pattern here.

Alex and Diane have done such a great job covering the Alex Rodriguez fiasco that I’ve been loathe to chime in with my, largely identical, reactions, but in light of Rodriguez’s confession to Peter Gammons last week, I wanted to take a look at the seasons during which Rodriguez admitted he had experimented with banned substances to see what impact, if any, those substances had on his on-field performance. The result was an article published over at SI.com at the end of last week.

. . . if he is indeed telling the truth about his drug use being limited to his three years in Texas, the only noticeable benefit that Rodriguez derived from his experimentations with banned substances was his ability to play 485 of the Rangers’ 486 games during his three years with the club. That’s no small thing. There are some who believe that the most undervalued statistic in baseball is games played. It’s irrefutable that Rodriguez’s ability to take the field every day as a Ranger enabled him to put up the remarkable counting stats he compiled in a Texas uniform, chief among them his 57 home runs in 2002. Still, there’s no evidence that the drugs made him any more powerful, and significant evidence that his rate of production actually declined during what he claims were his doping years.

Meanwhile, feel free to use this post as a disussion thread for Alex Rodriguez’s Tampa press conference set to begin at 1:30 pm today.