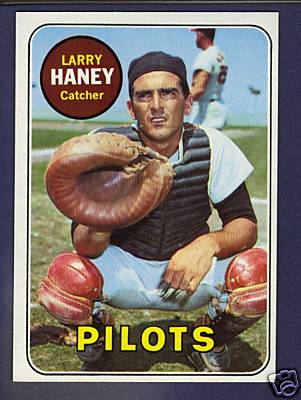 No, this man will not be the next catcher signed by the Yankees. As much as the Yankees’ catching corps has been overwhelmed by injuries, they’re not that desperate. Close, but not quite.

Contrary to appearances, Larry Haney was not a left-handed throwing catcher. It only looks that way in this 1969 Topps card. In contrast to the way that Hank Aaron and Dale Murphy achieved baseball card glory by being featured in reversed negative photographs, Haney earned only a momentary glimpse of trading card fame. In 1957, Topps released an Aaron card that showed the eventual home run king in a left-handed batting pose. And then in 1989, Upper Deck issued its Murphy card with a similarly wrong-handed pose, again the result of the photo negative being accidentally reversed.

Haney never received as much attention as either of these more celebrated cases, in large part because of his mediocre status as a good-field, no-hit backup catcher. There might have been another factor at play here, as well. Some collectors might have thought that Haney was trying to gain some notoriety by intentionally wearing a left-handed catcher’s mitt and pretending to play the position with the wrong hand. Yet, a conversation with former Topps president Sy Berger, who visited the Hall of Fame several years ago, revealed otherwise. Topps simply made a mistake in its photo processing; Mr. Haney had nothing to do with the “error.” In fact, the 1969 card features the same photo that was used by Topps in the 1968 set. Only that time Topps had the image right.

In many ways, Haney was the Jose Molina of his era. A lifetime .215 hitter with no power, Haney excelled at the defensive side of the game. For his career, he threw out 39 per cent of opposing basestealers. The Oakland A’s thought so much of Haney’s catching skills that they acquired him three different times, including twice during their world championship run from 1972 to 1974.

Originally signed by the Orioles in 1961, Haney played sparingly in three seasons for the Birds. After being taken in the 32nd round of the 1968 expansion draft by the Pilots, Haney appeared in only 22 games for Seattle, but did stake two claims to fame in the Great Northwest. He hit a game-winning home run in his first major league game. Later on, he set a Pilots team record for catchers by committing two errors in one game. Such uncharacteristic defensive pratfalls probably played little influence in the Pilots’ decision to trade him on June 14, 1969 (just before the old trading deadline), as they shipped the veteran receiver to the A’s for second baseman John Donaldson. From there, Haney went to the Padres’ organization (but never actually donned the lovely brown and yellow of the Pods), then came back to the A’s, spent a brief time with the Cardinals, came back to the A’s yet again, and finished his career with the Brewers in 1977 and ’78. Long since retired as a player, Haney worked for years as a scout for the Brewers—who used to be the Pilots, the same team featured on that 1969 Topps card.

Coincidentally, Haney was involved in another card error, albeit of a different kind. His 1975 Topps card displays an in-action photograph of an Oakland catcher awaiting a throw at home plate, but it’s not Haney in the picture. It’s actually former A’s catcher Dave Duncan, who had long since been traded away to the Indians as part of the George Hendrick-Ray Fosse swap.

So for a guy who had a mostly unremarkable career as a backup catcher, that’s two significant error cards. At least the card collectors will never forget Mr. Haney.

Bruce Markusen writes “Cooperstown Confidential” for MLB.com. He can be reached via e-mail at bmarkusen@stny.rr.com.

I love the mattress the guy wears on his right hand!