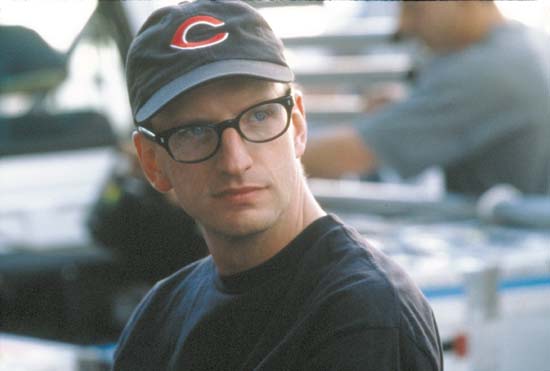 As you may have already heard, Steven Soderbergh will attempt to make the great baseball movie out of Moneyball, Michael Lewis’ seminal baseball book.  Brad Pitt is set to play Billy Beane.  Adapted for the screen by Steve Zaillian (Schindler’s List), Soderbergh is perhaps the ideal director to bring Lewis’ book to the screen.  When he’s not directing A-List star vehicles like Erin Brockovich or Ocean’s 11, Soderbergh makes smaller, more avant-garde movies like Schizopolis and The Limey where he experiments with linear narrative.

Moneyball is a book that, on the surface anyway, seems to be ill-suited for the big screen. But I’ve always felt that it had dramatic potential–a charismatic lead, evocative scene-chewing set pieces like the draft room business. The fact that it is not a traditional story works in Soderbergh’s favor.

“Bull Durham is the model for most baseball fans in terms of behavior and storytelling,” Soderbergh said recently.  “It seems the most lifelike. But I want to do something that’s even more immersive. I’m standing on the shoulders of [director] Ron Shelton. That was his contribution to the genre. Now it’s my turn….”My clearly stated goal is to set a new standard for realism in that [sports] world.”

Soderbergh has the cooperation of MLB (he can use game footage).  Art Howe, Rick Peterson, David Justice and Jeremy Giambi will play themselves as the director attempts to create a realism never seen in a baseball movie.

This all sounds promising.  But here’s the catch.  Moneyball was hip and timely when it was released in hardcover; now, the material is dated. I wonder how Soderbergh can work around this and create something that is aesthetically exciting, dramatically compelling, and relevant.

Monty Poole doesn’t think it can work. I have my reservations too, but believe it will be an interesting movie regardless. And since the bar for baseball movies is so low, Moneyball could be worth watching–it could even be the best baseball movie ever filmed–even if it is a fine mess.

I'm just as intrigued as anyone, but this has noble failure written all over it

Good call. Noble failures can be fun though.

I'm eagerly awaiting the big screen adaptation of THIS ...
http://www.amazon.com/Baseball-Dummies-Joe-Morgan/dp/0764552341

(unfortunately, Bernie Mac is no longer with us ...he'd do justice to Morgan)

Soderbergh fans, how do you feel about his post-Traffic career?

Moneyball hits home in a couple of ways. There is the enlightened embrace of knowledge and data leading to real results which is comforting. And there is the personal journey of a can't miss prospect determined to find out why he missed. I don't know if that's enough to sustain a decent movie. And I have no idea if we should expect Soderbergh to make a watchable and enjoyable film.

My biggest reservation is that one of the characters is going to appear in animated form!

[3] It would take a dead Bernie Mac to accurately portray Joe Morgan where baseball intellect and communication skills are concerned. As talented as Mac was, he quite literally couldn't convincingly dumb himself down enough, if he were still alive! Nobody could...

Tracy Jordan jumps to mind. I find him quite funny, but his character on 30 rock is no genius. You see Liz Lemon is intellectual and funny. She is also funny and intellectual. What makes her funny is that she's intellectual. And if she wasn't funny, she wouldn't be intellectual. or funny for that matter. That Kenneth, he's a scrappy page, though, and every office needs a scrappy page. That's my impression of Joe Morgan doing Tracy Morgan on 30 Rock.
Or something like that. : D

[7] You mean Tracy Morgan, and for some reason I just find him plain irritating. Maybe Garrett Morris...

[10] "Traffic" won four Oscars, but I found it rather frustrating and open-ended. I didn't even watch "Wonderbra"...

I'd rather have root canal than watch "Field of Dreams."