Bar none, it’s my favorite promotion on the Yankee calendar. It is “Old-Timers’ Day” and it arrived early this year. For the 65th time in their history, the Yankees officially celebrated their past glory. It is somewhat hard to believe, but Joe Torre and Bernie Williams participated in their first Old-Timers Day, several years after completing iconic careers in the Bronx. Their presence alone made the day special, but I was just as interested in seeing old schoolers like Moose Skowron and Hector Lopez, characters like Oscar Gamble and Joe Pepitone, and even those Yankees who made only cameos in the Bronx, including Cecil Fielder, Lee Mazzilli, and Aaron Small.

More so than any other sport, baseball revels in its ability to celebrate its past. Some would call it nostalgia; I’m more tempted to call it history. No franchise has had more cause to recall its own accomplishments than the Yankees, given the team’s longstanding on-field success, which began with the arrival of Babe Ruth in 1921. So it’s no surprise that the Yankees became the first team to introduce the concept of an Old-Timers’ Day to its promotional calendar. 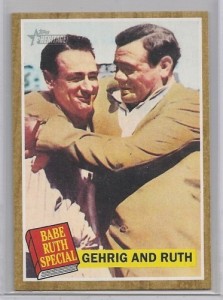 The Yankees initiated the promotion in the 1930s, though they didn’t actually refer to the event as Old-Timers’ Day. Rather, the tradition began more informally as solitary tributes to retired stars like Babe Ruth and Lou Gehrig. The salute to Gehrig became the best known of the early Old-Timers affairs. On July 4, 1939, the Yankees staged “Lou Gehrig Day” at Yankee Stadium as a way of paying homage to a legendary player whose career had been cut short by the onset of ALS.

After several former and current Yankees delivered emotional speeches lauding Gehrig as both a player and teammate, the retired first baseman stepped to the microphone. In an eloquently stirring address, Gehrig referred to himself as “the luckiest man on the face of the earth,” full knowing that he had only a short time to live because of the ravages of the disease. (Gehrig would succumb to ALS only two years later, at the age of 37.) At the conclusion of his speech, the capacity crowd responded with deafening applause, signifying its appreciation for an “old-timer” who had met with the unkindest of fates.

Seven years later, the Yankees introduced their first official Old-Timers’ Day to the franchise’s promotional slate. Rather than concentrate the honors on one retired player, the event became a celebration of teamwide accomplishments that had taken place over past years. Inviting a number of the team’s former stars to the Stadium, the Yankees introduced each one over the public address system, with each player acknowledging the applause from the 70,000-plus fans in attendance.

Ever since the 1946 event, the Yankees have held Old-Timers’ Day on an annual basis, always on a Saturday or Sunday afternoon, and usually sometime from mid-July to mid-August. (Other teams followed suit in the 1960s and seventies, particularly older franchises with sufficient history to draw from. Even an expansion franchise like the Mets participated in the tradition by celebrating the New York roots of the Giants and Dodgers.) In the earlier years of the event, the Old-Timers’ Game pitted former Yankees against retired stars from the rest of baseball, with the non-Yankees wearing the opposition uniforms of their most prominent teams. In more recent times, the Yankees have invited only former Yankees to the party, largely because they have so many retired stars from which to choose, some as far back as the 1940s. The retired stars now play a kind of celebrated intra-squad game, pitting the “Bombers” against the “Pinstripes.”

Other than the game itself, the format of Old-Timers’ Day at Yankee Stadium—with an on-field announcer introducing each retired player, who then jogs (or walks) from the dugout to a spot along the foul line—has remained relatively unaltered. Yet, the voices have changed. For years, famed Yankee broadcaster Mel Allen handled the emcee duties exclusively. Standing at a podium behind home plate, Allen introduced each retired player with his stately Southern drawl. Eventually felled by declining health, Allen gave way to the less acclaimed but highly professional Frank Messer, the team’s longtime play-by-play voice who was best known for his on-air partnership with Phil Rizzuto and Bill White. In recent years, radio voice John Sterling and television play-by-play man Michael Kay have shared the announcing chores—a far cry from Allen’s dignified presence at the microphone.

Over the years, Old-Timers’ Day has occasionally managed to overshadow the events of the “real” game played later in the day by the existing version of the Yankees. This has especially been the case during the franchise’s lean years. In 1973, the Yankees staged one of their most elaborate Old-Timers events as part of a 50th anniversary celebration of Yankee Stadium. The front office invited every living member from the 1923 team, the first to play at the Stadium after the relocation from the nearby Polo Grounds. With Gehrig and Ruth long since deceased, the Yankees invited their widows to participate in the ceremony from box seats located along the first base dugout. Mrs. Claire Ruth and Mrs. Eleanor Gehrig, both outfitted in oversized Easter hats, helped bid farewell to the “old” Yankee Stadium, which was slated for massive renovation after the 1973 season. The day became even memorable because of a development in the Old-Timers’ Game that followed; the fabled Mickey Mantle, retired five years earlier, blasted a home run into the left-field stands. The Mick still had some power in his game.

One of the most indelible Old-Timers’ moments occurred only five years later. After the usual introductions of retired players, the Yankees stunningly declared that Billy Martin would return as Yankee manager. Martin had been fired only five days earlier, done in by his damning declaration that “one’s a born liar, and the other’s convicted,” a reference to the duo of Reggie Jackson and George Steinbrenner.

In spite of the omnipresent New York media, the Yankees somehow succeeded in keeping news of Martin’s return a complete secret. There were no whispers, no rumors, no hints in the local newspapers. Having managed to keep the agreement with Martin in tow throughout the morning and early afternoon, the Yankees arranged to have all of their old timers introduced as usual by Allen, clearing out a final announcement for their deposed manager. Explaining that Yankee Stadium public address announcer Bob Sheppard would now deliver a special announcement, Allen turned over the microphone to his announcing counterpart. Maintaining his dignified delivery throughout, Sheppard revealed that Martin would return to the Yankee dugout two years later, in 1980, with recently hired manager Bob Lemon moving up to the front office as general manager. As a gleeful Martin trotted onto the field at a sun-splashed Yankee Stadium, a capacity crowd greeted him with a prolonged standing ovation that was motivated as much by shock as it was by joy.

In terms of dramatic theater, it was as timely and well orchestrated as any announcement I’ve seen during my lifetime as a fan. It showcased Old-Timers’ Day at its best, combining the predictable and orderly splendor of a ceremonial day with an unexpected and newsworthy development that bordered on spontaneity.

We didn’t see that kind of news making event yesterday, but that didn’t make the day any less significant. Seeing former Yankees in uniform, sometimes for the first time in years, is something that will always prompt the goose bumps. If you like and appreciate the history of this franchise, then Old-Timers’ Day remains the one day that cannot be missed.

I'm here! Nice column on the history of the Yankees' Old Timers' Day. I have to admit I didn't know much about its origins.

It was great to see Joe and Bernie. I couldn't stop smiling.

Late again, but great article, I learned a lot!

I was listening to Francesa yesterday and he brought up two criticisms of Sunday's Old-Timers' event: the introductions for each player are way too long, and Williams and Torre should have been introduced last. I love Old-Timers' Day, but I thought those were two legitimate points made by The Big Man.