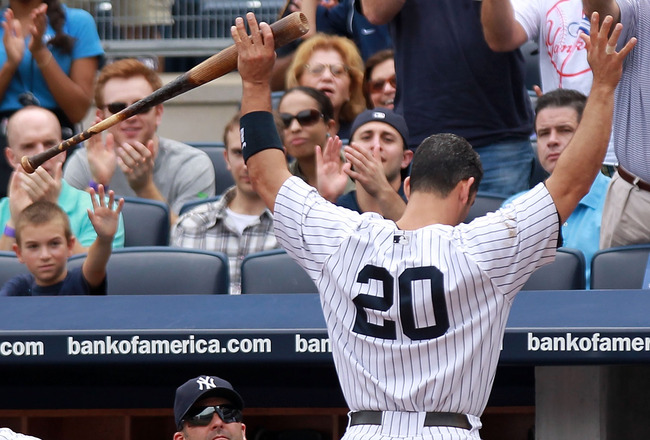 Jorge Posada’s Yankees career has come to an end, at least that’s what he seems to think. Considering Brian Cashman has not even reached out to discuss a reduced role with his long-time catcher, chances are Posada’s hunch is probably right. There’s always a possibility, albeit slim, that the Yankees could decide Posada still fits into their plans for 2012, but if this really is the end of his time in pinstripes, we can finally take a look back over his long career and truly appreciate just how much he has meant to the organization. Since 1996, when the current Yankees’ dynasty was born, only Derek Jeter, Andy Pettitte and Mariano Rivera contributed more to the team than Posada, at least in terms of average WAR. Of course, you really don’t need a sophisticated sabermetric to illustrate how important Posada was to the franchise’s incredible success over the span of his career. He really was a core member of the Yankees. That wasn’t just a clever marketing slogan.

The magnitude of Posada’s contribution to the Yankees is impressive even beyond the context of the era in which he played. Again using average WAR as a barometer, only 10 position players have contributed more to the pinstripes, and, needless to say, the company is rather select. By just about any measure, it isn’t a stretch to say that Jorge Posada is one of the greatest Yankees to ever play the game, and many of the players worthy of that distinction also happen to be in the Hall of Fame. Although some might dispute the notion of Posada as Cooperstown worthy, his credentials are compelling. Unfortunately for the Yankees’ backstop, his career happened to coincide with arguably the greatest offensive (Mike Piazza) and defensive (Ivan Rodriguez) catchers to ever play the game, so it’s easy to see why he is sometimes overlooked when making Hall-worthy assessments. Despite these formidable contemporaries, however, Posada’s statistical record still stands out.

Note: Players with at least 1,000 games, two-thirds of which were as a catcher.
Source: Baseball-reference.com and fangraphs.com

During the 20-year period from 1990 to 2010, Posada’s OPS+ of 123 ranks second only to Piazza’s 142 (among players with at least 1,000 games, two-thirds of which were as a catcher). The same is true for his wRC+ and wOBA. Based on more traditional stats, Posada also distinguished himself during the period, ranking tied for first in on base percentage and third in home runs and RBIs. As a result, Posada won five silver sluggers behind the plate, the fourth highest total amassed at the position. Although some catchers, such as Joe Mauer, have had better rates over a shorter horizon, Posada’s longevity is also a feather in his cap. In the 20-year span under consideration, only four others have started more games behind the plate, which is remarkable considering how slowly the Yankees eased him into the starting role.

Jorge Posada vs. Hall of Fame Catchers and Likely Inductees

There are currently 12 primary catchers elected to the Hall of Fame, making it the most underrepresented position on the diamond. However, even despite this very select company, Posada’s career totals still figure prominently among catchers already enshrined or almost certain to be. In the chart below, Posada’s relative rankings in several offensive categories are provided. Although a rudimentary analysis, it shows that Posada can stand toe-to-toe as a hitter with every other Hall of Fame backstop but Piazza.

Posada’s Ranking Among Hall of Fame Catchers and Likely Inductees As a hitter, Jorge Posada’s Hall of Fame credentials seem undeniable, so the deciding factor could be his work behind the plate. Defensive metrics are relatively unreliable in general, but for catchers, they are severely limited. For that reason, it’s likely that Hall of Fame voters will rely on reputation. Because of how rapidly his catching skills declined at the end of his career, that might seem like a liability for Posada, but during his prime, the backstop was often regarded as being an above average defender. If that’s the prevailing sentiment when Posada’s name comes finally appears on the ballot, his chances of being enshrined would be greatly bolstered.

“I see vintage Jorge Posada, everything we expect. He’s one of the best catchers in baseball and he has been. He’s an offensive and defensive catcher. This is what I expect, this is what he is and this is what he’s been. This guy is going to go down as one of the famous Yankee catchers, along with Yogi Berra, Bill Dickey, Elston Howard and Thurman Munson.” – Brian Cashman, quoted in the New York Daily News, August 8, 2006

How will Jorge Posada be remembered? Despite often being overlooked on a team chock full of talent, Posada’s contribution to the Yankees’ dynasty is undeniable. He is more than deserving of all the accolades usually bestowed upon a Yankees’ legend. His number 20 should never be worn again, and his plaque for Monument Park should soon be minted, but perhaps the most meaningful honor is the special place he occupies in the memories of an entire generation of Yankees’ fan. They won’t soon forget how great Posada really was. Hopefully, the Hall of Fame voters will remember too.

It will be a great test to see what happens to Posada when it comes to the HOF. His two best arguments for entry, excellent rate stats as a hitter and a key figure of one of the greatest teams of all time, are undercut somewhat by the fact that he played in an extreme hitters' era and that he was terrible in the postseason most of the time. His WAR totals, because of his very late start, leave him right below a bunch of people who are in (cochrane, hartnett) and right above a bunch who are out (porter, Munson).

How will voters treat a short career that was often good but never brilliant? Campanella had his career cut short by a tragic accident, but with 3 MVP awards under his belt he was in. Same for Munson, but he didn't reach te levels of campy, and he is out. Posada has short career because the yanks didn't think he was good enough to play full time. I bet the voters don't give him a lot of sympathy for that.

All this, a poor defensive rep and my cynical feeling that voters are gleefully going to limit the latest Yankee dynasty to two and only two HOFers so that it can forever be used against them in GOAT arguments (ok that might be paranoid), and I think posada struggles to get in.

I'd vote for him.

jorgie's a hall of famer in my heart. thanks for everything!!!

[1] I agree with your point about Posada being in a kind of limbo. His candidacy could really break either way. My fear is he will be discounted because of how poorly he played defense at the end of his career.

There are two points with which I disagree. I do think Posada had two or three seasons that rise to the standard of brilliant, which is admittedly low for a Hall of Famer, but more than never. Also, I wouldn't say he was "mostly" terrible in the postseason. However, he was very inconsistent. He had seven series with an OPS of at least .900 and six below .600, for example. At a combined rate of .745, his performance may have been close to "league average" for the post season, and actually pretty solid for a catcher. I don't think his post season performance will help him, but I also don't think it will hurt (which is why I didn't mention them above, but probably should have for more context).

[3] yeah, you are right, he had two or three season which deserve the brilliant label. his total PS #s are kind of a far cry from his reg season totals, mostly in the power dept, so that is what i meant. again, you're right he had some moments.

I can't argue with the statistics. But having watched Jorge for the passed decade, I can't see him in the HOF. Great Yankee, much loved, but I always feel the HOF should be reserved for something remarkable. Jorge just had too many holes in his defense and base running to give me the feeling of remarkable.

I think the Yanks should get moving on honoring him however.

i tried to check out all the top modern catchers like william did above and here are a couple of instructive lists:

by this list, posada seems to need a little help from somewhere. not much, but a little.

he seems like a better fit here as a hitter only, outside of the coutning stats. adjusting out his big offensive era he still snuggles in the lower end of a solid HOF block and he's a lot closer to the guys above him than the ones below him.

sometimes it's useful to look backward. he was at the center of one of the winningest team evers. that's got to count for enough to put his borderline case over the top.

[5] I do regard Posada's career as remarkable. If there's a complaint, you could say it was a year or two too short.

[6] If Posada was widely regarded as even just an above average defender, he would be a lock. It's his defense that weighs down the average.

Also, one note on Simmons. When considering his case, you have to take into account that he played about 2 seasons at a position other than catcher.

[7] As a % of his total games played, Simmon caught a little less often than Posada. But Simmons started behind the plate 1578 times, Posada only 1450. And Simmons acquired more bWAR in his catching years (18-32), 49.4, than Posada did in his entire career, even if we eliminated 2011 for Posada, in which he produced negative bWAR.

Posada has the more impressive power and patience, and the rings, but alot of that is about the context (hitters' era and yankee $). if someone wanted to make a strong argument that Posada had to get in line behind Simmons, would be hard to refute.