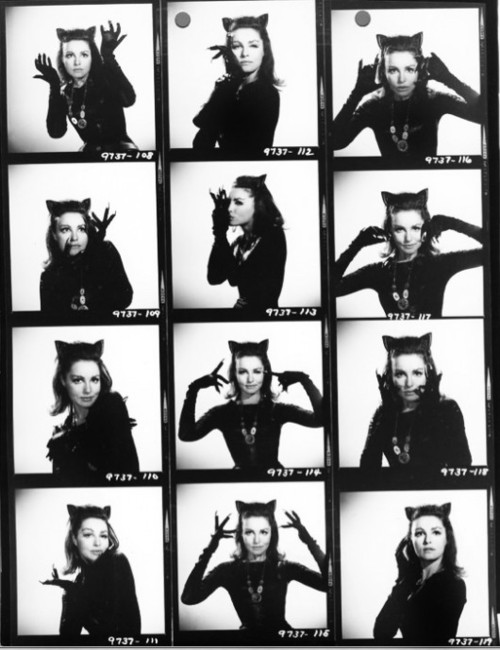 Not long ago I was thinking about the first crush I had on a TV or movie star. Linda Carter, Bo Derek, and Catherine Bach all came to mind. Valerie Bertinelli, Ann Jillian, and Deborah Harry, too. Then it hit me: It was Julie Newmar as Catwoman. I used to watch Batman in syndication during the afternoon. Must have been four or five years old. Catwoman was always messing with Batman’s head, dressed in that tight outfit, getting all close to him and whispering in his ear, ready to pounce. Yup, Julie Newmar was dangerous, the first sex symbol I fell in lust with.

Categories:  Art of the Night  Arts and Culture  Photography

batgirl for me too. all red heads really, for some reason, including animated ones. batgirl, josie from the pussycats, daphne from scooby doo, ginger from giligan, probably others i can't remember.

probably age 3-5 i'm remembering. after 5, i had crushes on girls in my class.

4) I liked her more than Loni Anderson. And I also kind of liked the wife on "Welcome Back Kotter."

I wasn't that wild over the "Charlie's Angels" ladies but Kate Jackson was my favorite, which is random, I know.

[7] Agreed. How about Erin Grey on Buck Rodgers?

9) Good one. Grace Jones, I was also aware that she was something that had to do with sex but I was too scared to find out what that might of been about.

Many teams added a bunch of players to their rosters today. And a lot of them, including the Yankees, added players that wouldn't be eligible for Rule 5 under the current rules.

A change in the new CBA, maybe? Are they going back to the pre-2006 rules?

(3) with you on the redheads! Also was totally in love with Karen Allen in raiders of the lost ark.

Wow. Great topic. Definitely into Julie Newmar in a big way. How about Lee Meriwether as Catwoman--and especially as Miss Kitka--in the Batman movie. The date she has with Bruce Wayne is hilarious.

[13] Yes, must be the Karen Allen in Animal House in a T-shirt with nothing on underneath....although I wish we didn't have to see Donald Southerland's butt. "Katie where's the sugar?"

It seems like everybody liked Bailey. I concur. But my all time favorite is Mortica Addams....drop dead sexy Carolyn Jones.

Barbara Eden and Elizabeth Montgomery were always great, but I loved when they got to vamp as their evil twins.

Cool, Hip, British; loved her at a very delicate age.