Observations From Cooperstown: Andy Carey and the Utilityman 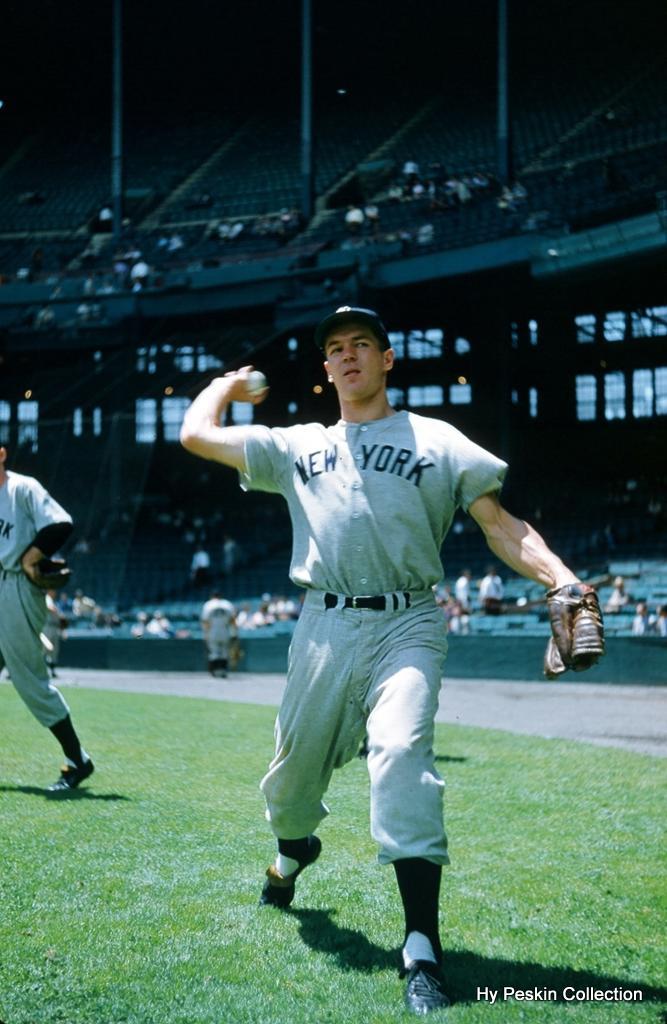 Andy Carey was not a star–perhaps he was no more than an average player–but he was good enough to start at third base for a pair of world championship teams during the glory years ofNew York City baseball. And if not for his presence at the hot corner, Don Larsen might not have made history in the 1956 World Series. 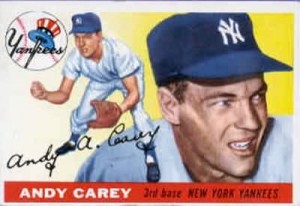 Carey died on December 15 at the age of 80, succumbing to a severe form of dementia, but his death was only reported publicly last week. Perhaps that’s a testament to the family’s desire for privacy. Or perhaps it’s evidence that Carey had become a forgotten figure in Yankee lore, having not played for the franchise in over 50 years. If the latter reason is the more accurate, then perhaps it’s something of a sad commentary on our society’s lack of interest in history.

Well, Carey should be remembered. First, he had a bit of quirkiness to him. For example, he was known as a voracious eater. He ate so much that he started costing the Yankees money. On road trips, the Yankees typically allowed players to sign for their meals in hotels and restaurants. Because of Carey’s insatiable appetite, the Yankees changed the policy.

On the field, Carey was the Scott Brosius of the 1950s, except for the fact that he never had the kind of breakout season that Brosius enjoyed in 1998. When Carey first came up, he was so strong defensively that the Yankees considered converting him to shortstop, with the plan to have him succeed an aging Phil Rizzuto. Ultimately, the Yankees decided that he was a better fit at third; he became the starting third sacker in 1954.

Offensively, Carey had only marginal talent. He led the league in triples one year and batted over .300 in 1954, but those achievements were the extent of his hitting highlights. Conversely, he was a solid defensive player, once turning four double plays in a single game to tie a major league record. On a team surrounded with sufficient offensive talent, like the Yankees had in the mid-1950s, you could win with a player like Carey at third base.

Larsen was certainly appreciative of Carey in Game Five of the ‘56 Series, when he took part in two remarkable plays. In the second inning, Carey knocked down a line shot off the bat of Jackie Robinson, the ball caroming to the left of the third baseman. Yankee shortstop Gil McDougald retrieved the ball and nipped Robinson at first. And then in the eighth, Carey made a diving snag of Gil Hodges’ line drive. Carey’s two-time heroics preserved both the no-hitter and the perfect game, the latter being the only one of its kind in postseason history.

Carey remained with the Yankees through the 1959 season. With the arrival of Clete Boyer via trade, the Yankees deemed Carey expendable. They traded him to theKansas CityA’s, Boyer’s former team, in exchange for power-hitting outfielder Bob Cerv.

From there, Carey bounced around with the A’s, White Sox and Dodgers before calling it quits in 1962. But it was as a Yankee that he would always be remembered. Carey became a frequent visitor toCooperstown, where he took place in baseball card shows, almost always signing with other Yankees from his era, like Larsen, McDougald, Yogi Berra, Moose Skowron and Hank Bauer.

Off the field, Carey led a busy life. He was married four times, including a past marriage to Lucy Marlow, a relatively little known actress who appeared in such programs as “Gunsmoke” and “The Blue Knight,” two old shows that I actually remember. The IMDB web site describes her as a “knockout-looking minor 50s film and TV actress.”

Some might describe Andy Carey as a “minor” player of the fifties, too. And that would be unfair. When you’re good enough to start for a quartet of pennant-winning teams and a couple of world champions, you deserve more of a description than that…

It continues to be a quiet off-season for the Yankees, with the latest non-development being the inability to sign Japanese star Hiroyuki Nakajima by last Friday’s deadline. Nakajima wanted more than a one-year contract, which represented the Yankees’ limit, and was not thrilled with the prospect of playing a backup role inNew York.

While most observers have fluffed off the non-signing, I think there’s something deeper here. That the Yankees had such interest in Nakajima, an All-Star shortstop inJapanwhom Brian Cashman projected as a utility infielder, indicates that they are not completely satisfied with Eduardo Nunez, last year’s utility man, or totally enamored with the prospects of re-signing Eric Chavez.

The Yankees love Nunez’ raw tools–he has an appealing combination of power and speed–but they are legitimately worried about his throwing problems. Derek Jeter and Alex Rodriguez are going to need more days off in 2012, not fewer, so Nunez will have to become more accurate in making throws from the left side of the infield. Perhaps that deficiency explains why the Yankees have been willing to include Nunez’ name in trade talks with teams like the Braves and the White Sox.

With regards to Chavez, he did play well before breaking his foot, but then showed little power after his return. And then there’s the problem of his repeated trips to the disabled list, which have become an annual occurrence. If a utility infielder cannot be trusted to stay healthy and fill in when needed, he loses a lot of his value.

If the Yankees don’t re-sign Chavez, where will they turn? On the free agent market, the pickings are slim, but there are some intriguing names, including Carlos Guillen, Bill Hall, Jeff Keppinger, and Miguel Tejada. All carry asterisks, if not outright questions. Guillen was once a star, but he’s now 35 and can’t stay healthy. Hall played so poorly for a bad Astros team that he was released in mid-season, and then he flopped during a 16-game trial with the Giants. Keppinger can really play only one position, second base, and doesn’t have the ability to play shortstop for more than a game at a time. Tejada, at 37, is as cooked as the Christmas goose in Scrooge.

All in all, the choices appear so limited that the Yankees may be forgiven for having the following thought: Is Chicken Stanley still available?

I didn't know much about Carey. Thanks, Bruce.

[1] yeah, i always learn so much baseball history from bruce.