Joe Paterno died Sunday at age 85. Life and career retrospectives abounded. Wins and losses were mentioned, as were bowl game triumphs, the iconic look he brought to the sidelines every Saturday. Most of all, his contributions to the “student athlete” and the culture he created outside the gridiron and the towering edifice that is Beaver Stadium were discussed. 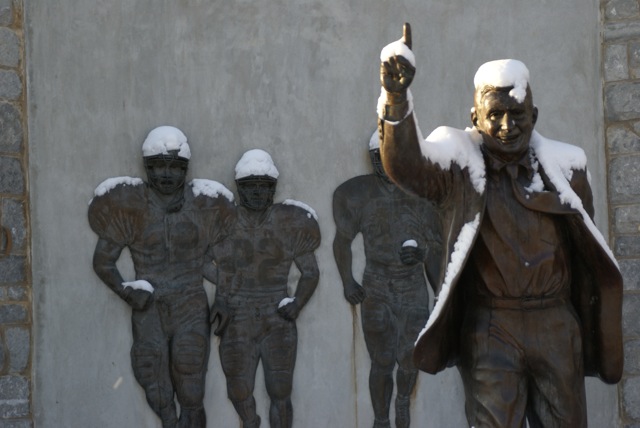 Not be ignored, though — and it wasn’t — was his role, his actions and his inaction regarding a certain former assistant coach and alleged pedophile. The Onion’s satirical headline spoke volumes: “Joe Paterno Dies In Hospital; Doctors Promise to Tell Their Superiors First Thing Tomorrow”.

Legacies are meant to demonstrate an example to be set for successors. Sounds simple but legacies are complicated. Look at Ty Cobb, Babe Ruth, Pete Rose, Woody Hayes, Bear Bryant, Bobby Knight, Vince Lombardi, Wilt Chamberlain, Mike Tyson, Michael Jordan, Magic Johnson, Tiger Woods, Kobe Bryant, Lawrence Taylor, or most recently, Bill Conlin. Look at any iconic athlete, coach, writer, celebrity or politician whose indiscretions  made them as infamous as their contributions to their chosen fields made them famous. Look at the names I just listed. If we were playing word association, you could probably think of the words racist, drunk, womanizer, gambler, bully, insane, drug addict or kid toucher as quickly as you could think of Hall of Famer, Hit King, 714 home runs, 6 titles or  14 majors. Bryant, winner of 5 NBA titles and still considered in many circles the best player in the sport, was acquitted of the rape charges nine years ago; yet when a philandering husband suddenly buys a lavish gift for his spouse as a means of apologizing, it’s called a “Kobe Special.”

Observing how the media has treated those players and coaches over the years, has there been a reluctance to hold any of them accountable for their actions? In many cases, no. Thus, in reading and listening to the Joe Paterno tributes, I was curious how the media would address Paterno’s role in the Jerry Sandusky scandal in the context of his legacy.

The common refrain was that while we can’t dismiss his management of the Jerry Sandusky situation, we shouldn’t let that cloud our view of the man. If you knew someone who had a reputation of always going above and beyond for others, yet suddenly did the bare minimum and expected that to be enough, what would you think?

In The Nation, Dave Zirin wrote:

…according to our conception of who this man was supposed to be, there was no authority above Joe Paterno. There was instead an expectation that this man of integrity would without hesitation do far more than just fulfill his minimum legal requirements. Is that fair? When it’s your statue on campus and when the buildings bear your name, most would say hell yes.

Howard Bryant wrote one of many commentaries for ESPN.com on Paterno’s death. He brought forth a similar sentiment as Zirin:

…Paterno had too much power with not nearly enough oversight. He was bigger than the school, and the school cowered to him. Paterno gave millions back to Penn State; and as his power grew and grew unchecked over four decades, the university lost the ability to control whether he was benevolent or a tyrant.

It was not a power particularly special to Paterno, but to his industry. The entire culture of the coach deserves deconstruction and revision, for the same can be said in varying degrees of Bryant and Knight, Bowden and Calhoun, Krzyzewski and Boeheim.

When it was time for Paterno to use the power that he had accrued — when he became aware that for years, children allegedly were being molested under the ceiling of the football monument he had built — he did not lead.

Joe Posnanski is writing a book about Joe Paterno. He did not blog about JoePa’s death, but he filed a piece for SI. The last words of the column quote Paterno, who said that “hopes the victims find peace.” Posnanski precedes the quote by writing that Paterno wanted his life measured in totality rather than by “a hazy event involving an alleged child molester.”

Perhaps the most vivid piece of writing about “the hazy event” and Paterno can be found in  this diary. Warning: it’s not for the sensitive. It is heart-wrenching, explicit, and likely represents the anger of many who have sat back and thought “WTF?” regarding Paterno, Sandusky and the events of the past two months.

Jeff MacGregor also posted for ESPN.com, with a take that I’m sure will be used in the Sport Studies curriculum at universities across the country. I’ve written in this space about man, myth, and legend; I did so in my first story on this topic back in November. MacGregor is much better with metaphor:

Joe Paterno was no more and no less than human, and no living man can contend with his own legend. No man can live in his own shadow.

A bronze statue of Joe Paterno standing seven feet high and weighing 900 pounds was swung into place at Penn State on Nov. 2, 2001.

Four months later to the day, March 2, 2002, Mike McQueary stood at Joe Paterno’s door. He had a terrible story to tell.

There’s a poignant scene in “The Deer Hunter” near the intermission when Robert De Niro’s character, Michael  is carrying Steven (John Savage), a badly injured friend, over his shoulder to safety. It is one scene among many makes the film’s title so significant; Michael is carrying Steven the same way he’d carry a deer after shooting it. Steven had become the deer carcass. Similarly, is it not reasonable to believe, based on MacGregor’s closing paragraphs, that four months after his statue was erected at Penn State, that Paterno became the statue?

Paterno told Posnanski he wanted the victims to have peace. The first step could have been taken right then and there. Maybe even sooner. That, for many, is the focal point of any discussion about the late Joe Paterno’s legacy. And in the cumulative analysis of the man, the coach, the academic, the philanthropist, benefactor and humanitarian, we cannot be afraid to hold him accountable for that.

Great job pulling this together Will.

The best thing that could be said for Paterno is that he lacked the courage to follow through on a frightening claim.

i've been a posnanski fan for a while but he hasn't exactly covered himself in glory on this one, if you are asking me.

[3] Bags, that's the way many of us who have been fans of his feel on this. It's unfortunate.

Burke: "All that is necessary for the triumph of evil is that good men do nothing."

Shakespeare: "The evil that men do lives after them;
The good is oft interred with their bones"

[5] Wow. Well said, and so true and applicable to more than analysis of this topic.

Very hard to know exactly what to say about the whole situation. Was Paterno ill-equipped to handle the situation? Yes, I don't expect football coaches to investigate child sex abuse cases. That's why police have special victims units. So he was correct to report it to higher ups.

But here's the thing: how do you not follow up on it? You've either got 1) a GA who's telling the most vicious of lies or 2) a sexual predator. How do you not be curious about your 30 year right hand man? I've got no idea what Paterno was thinking, whether he was more interested in protecting his program than children. But how do you put such an allegation aside in your mind?

Posnanski has lost a lot of credibility with me. I know he receives a lot of praise for his baseball writing, but how I am I supposed to give a hoot what he says about baseball when he is so clearly lost and out of bounds on the Paterno story?

[8] Sorry, thelarmis. I know this is near and dear. It's tough to reconcile all around.

[9] Agreed. Enjoy his baseball ramblings a lot but this seems liek a major journalism fail on his part.

The diary linked to above..wow. Incredible piece of work. Really says it all..

It ain't Shakespeare but...

[12} Everyone should read the diary above.

When a person with longevity of high achievement dies, we might soften the rough edges, or be conciliatory. Never forget that real victims have had their lives changed and it would have been stopped, except it seems that friendship, fear of scandal, and valuing a program/university over people won out.

And now there is this:

[5] Apt quotes. Julius Caesar was my first Shakespearean play in high school. It made me fall in love with Shakespeare.

I had thought that there is nothing more that the arrogance of sports and money could do to surprise and then came along this Penn State scandal. Reading that grand jury presentment made me physically ill.