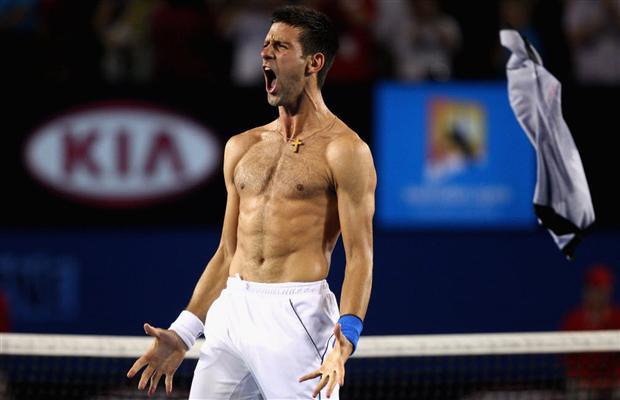 Woke up this morning and tuned in to the men’s final of the Australian Open in the fourth set. Didn’t move for the next two hours. Okay, I lied. I paced around the apartment as I watched Djokovic beat Nadal in a tense match that was played at the highest level. Djokovic has won the last seven meetings against Nadal including the last three Grand Slam finals. Nadal showed great courage today, for sure, but he fell short. Over at SI.com, Jon Wertheim shares this thoughts on the classic match.

Yup. And Murray can't beat any of them. Federer at least I say, well, the dude is old. I don't see him winning another major with Nadal and Joker in top form. Be nice to see Murray win one at some point though.

This was on in prime time here last night. Epic.

[2] True about Federer ... He's still great but declining. I think he's the best of his era, at any rate. Nadal isn't actually on his level, I don't think, he just happens to be match up terrifically well with him. Not taking anything away from Nadal, but - well, also aesthetics count, I think.