Color By Numbers: Kryptonite and Spinach 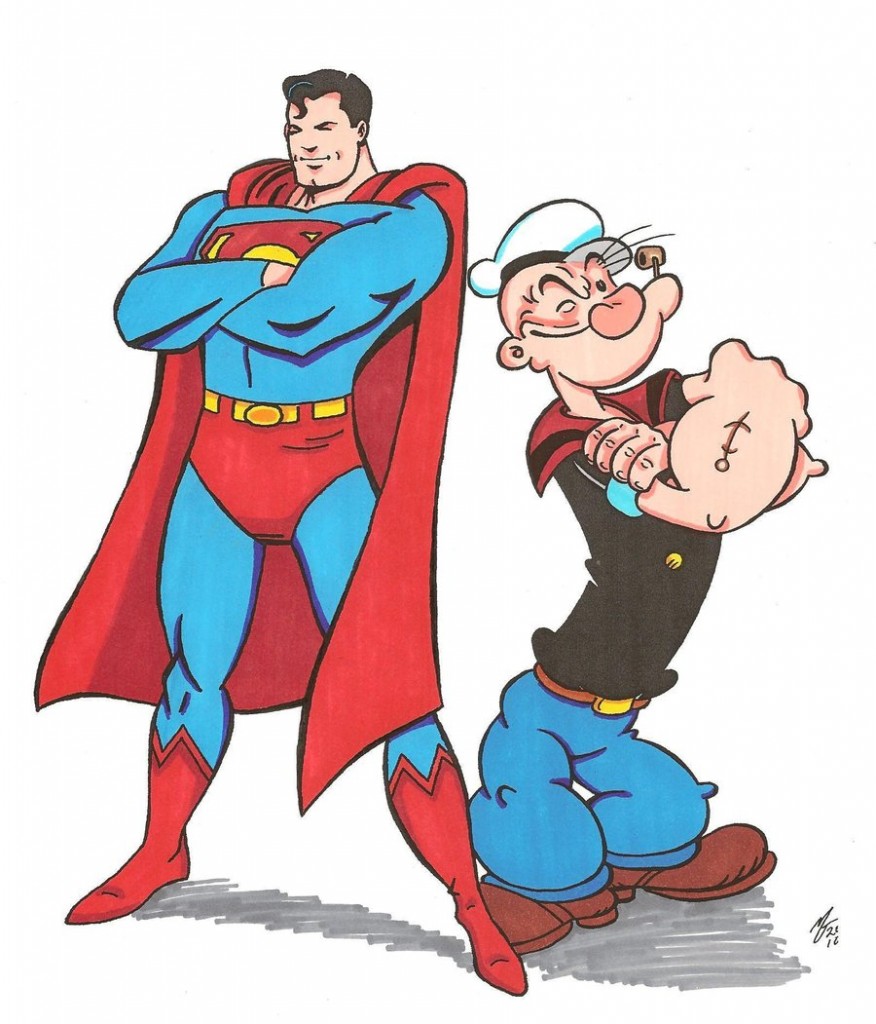 Superman had his kryptonite. Mariano Rivera had Edgar Martinez.  In 23 plate appearances against the immortal closer, the Mariners’ prolific DH batted an incredible .579/.652/1.053. When there’s a clash of the titans, someone has to win, and in this rare instance, the great Rivera was usually on the wrong side of the battle.

If Martinez was Rivera’s kryptonite, Ray Durham was his spinach. In 26 plate appearances against the closer, the former All Star 2B never got a hit. Although extreme in his level of futility, Durham has plenty of company among hitters who have been dominated by Rivera. Over 40% of the 83 players with at least 15 plate appearances against the all-time saves leader have posted an OPS below .600, so, just like a real life superhero, the Yankees closer is accustomed to getting his man.

Kryptonite and Spinach for a Selection of Top Pitchers Note: Based on hitters with a minimum of 25 plate appearances (15 PAs for Rivera) against each starter. Includes post season results.
Source: Baseball-reference.com

The chart above lists the five hitters with the most and least success (i.e., the kryptonite and spinach) against Rivera as well as a selection of top starting pitchers from both the present and past. As you can see, the chief nemeses for an elite pitcher are often hitters of equal renown. For example, Bob Feller had Ted Williams, Randy Johnson had Albert Pujols, and Sandy Koufax was made human when facing the immortal trio of Hank Aaron, Stan Musial and Willie Mays. However, there are some anomalies, such as Steve Ontiveros’ success against Tom Seaver. In 28 plate appearances, the former corner infielder for the Giants and Cubs, who had a career OPS of .731, managed to more than double that rate when facing Tom Terrific. The same relationship also existed between Greg Maddux and Javier Valentin, a light hitting catcher who somehow managed to solve the riddle of the Braves’ right hander.

The Seaver/Ontiveros and Madduz/Valentin pairings are probably the most surprising from the chart above, but that doesn’t mean the other elite pitchers haven’t had their share of unlikely antagonists. Marco Scutaro has been one of Rivera’s more frequent tormenters, while teammate CC Sabathia has found Rod Barajas to be one of his toughest outs. Two light hitting infielders, Jose Lopez and David Eckstein, have given Roy Hallday headaches, while Jerry Hairston Jr. is on a very small list of hitters who had Pedro Martinez’ number. Very few pitchers have been more intimidating than Bob Gibson, but that didn’t stop one of the worst hitters in baseball history from dominating the right hander. No hitter with at least 4,750 plate appearances has an OPS+ lower than Tim Foli’s 64, yet, somehow the journeyman managed to bat .483/.516/.586 against Gibson. Not to be outdone, Neifi Pérez, who matched Foli’s infamy by posting an OPS+ of 64 in over 5,500 plate appearances, also picked on one of the game’s greatest pitchers. In 42 plate appearances against Randy Johnson, Pérez raised his game exponentially, batting .333/.333/.619 against the Big Unit. The chart below displays the distribution of OPS rates compiled by batters with a minimum number of plate appearances against our selection of great pitchers (see note for explanation of criteria used).  Rivera and Clemens are the only two pitchers from the group to keep a hitter under an OPS of .100, while Clemens also scored the lowest percentage of hitters who racked up an OPS over 1.000. Among the starters, only Pedro matched Rivera in terms of the number of hitters with an OPS against below .700; Tim Lincecum is the leader of the actives. Finally, all but Feller, Sabathia, and Hernandez have more “blue” than “red” on their charts, but it should be noted that trio pitched more seasons in a higher run environment than all others but Rivera and Halladay.

“OPS Against” Distribution for Select Group of Top Starters 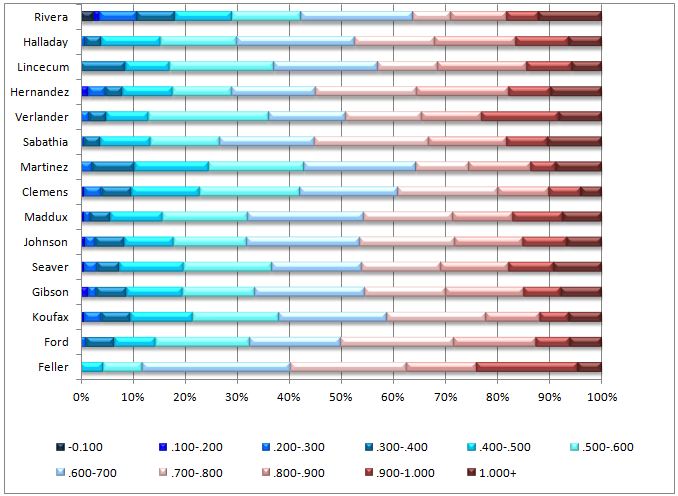 Note: Based on hitters with a minimum of 25 plate appearances (15 PAs for Rivera) against each starter. Also, a 7% OPS adjustment (based on a crude comparison of league OPS in the different eras) was used to approximate the lower run environment that existed during the careers of Seaver, Ford, Gibson, and Koufax. Includes post season results.
Source: Baseball-reference.com

Funny to see Gregg Jeffries in Pedro's kryptonite column. Way early in his career I guess.

Wonderful work, as always, man. Thank you. Wasn't Edgar something like 9-11 against Mo at some point?

4) I knew it was something like that. That was uncanny. Then again, Edgar was the man, wasn't he?