The Error of Our Ways

The following is from Pete Dexter’s essay in “Damn Yankees.” Dig in. 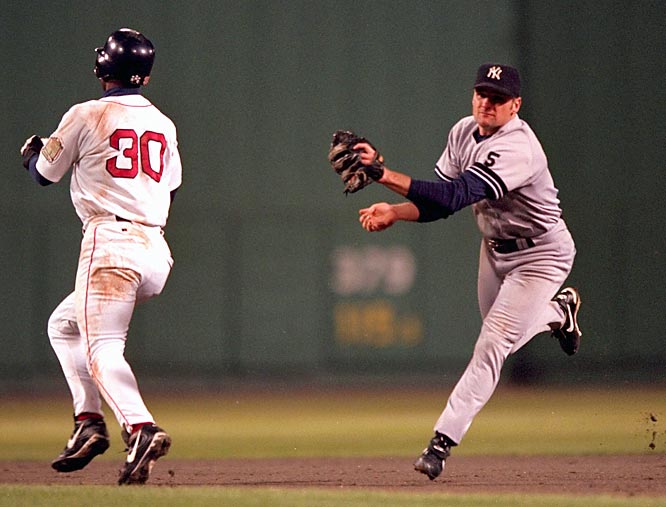 “The Error of Our Ways”

A sheltie is a medium-size breed of canine that walks around with a nest of shit in its pants. In his own circles this earthiness makes him fascinating company and kind of a celebrity at the off-leash park, although the same earthy quality is worrisome to families with toddlers who, being toddlers, hug dogs without caring much which end they are hugging. Aroma-wise, there isn’t much to choose from, one end or the other.

Shelties also bring to the playground a tradition of nipping. A sheltie is born to herd sheep, after all, a species nobody has accused of being too smart for its own good, and the herding of which amounts essentially to creating and then organizing panic, which means taking little bites of ankles and feet, and there are times, in spite of countless reminders, when old habits take over and a sheltie just has to have the feel of live flesh in his teeth. The sheltie himself is close to blameless. You are, after all, who you are. We should keep that in mind.

The sheltie who nipped the author last Christmas belongs to his daughter and answers—well, doesn’t actually answer, but some- times looks up—to the name Jonesy, and until the baby showed up no dog ever had it more his own way. In fact, until the baby showed up the dog himself had been the baby—doting parents, daily brushing, special food, a park next door, maintenance ap- pointments to keep his nails clipped and the gunk off his teeth, endless toys—the salad days. 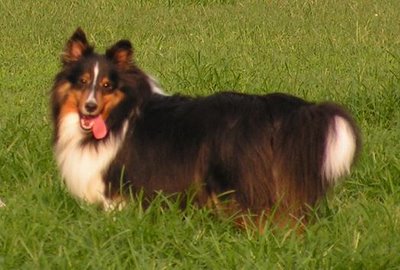 Naturally enough, the baby’s arrival left the dog suffering from a lack of his normal attention and so, upset and confused, Jonesy went back to what works and bit the first stranger through the door. The resulting infection put the author in the hospital for ten weeks and very nearly finished him off. If the animal had sat on the author’s foot after he’d nipped it, the author would not be here to tell the story.

Which probably would have been fine with Chuck Knoblauch. 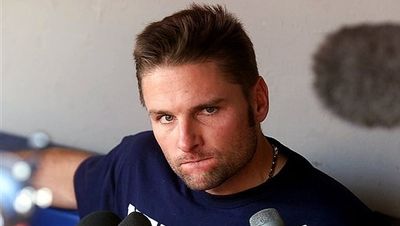 But bygones are bygones, and things were not so easy for the dog, either. Once the baby showed up, barking in the night and herding humans, which had been baby-talk scolding offenses before, were suddenly federal cases, and in the way these things sometimes go, after his mistake—and it was a mistake, you could see the surprise on the animal’s face as he sat on the floor with the author’s ankle still in his maw along with the bitter mingle of human sweat and human blood, looking up and wondering how this could have happened—after that mistake, Jonesy was driven out one Saturday afternoon to the rural setting where he now resides, with afternoon naps under the porch and chickens to herd and no toddlers to clutch him from behind, and he is free to come and go as he likes and to bark in the night (the new owners are getting on in years and take out the hearing aids after the eleven o’clock news).

Which is as close as you get to a happy ending with dogs, but not so happy when you’re talking about second basemen.

We are speaking now of Edward Charles Knoblauch who, like Jonesy, had a good thing going and then fucked the rooster. A colloquialism they use quite a bit out on the farm. 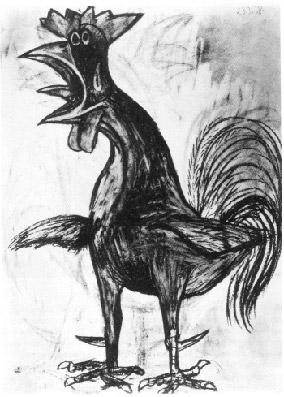 What the farmer and his missus are referring to when they say “fucked the rooster” is a class of mistakes that by their very nature are hard to forget. That happen in a moment of carelessness or bad luck and are as good as tattooed across your face for the duration of your life. That become so closely associated with your idiot self that later on when another idiot does exactly the same thing, your wife gets mad at you all over again.

The author speaks from experience here, having once made such a mistake—a miscalculation of the goodness of human nature in a not especially human precinct of Philadelphia—and the incident follows him to this day. Not just the memory of the night—which is kept in easy reach of the author’s wife (who regular readers call “poor Mrs. Dexter”), handy as her purse any time the author, like Jonesy, feels his breeding and the undeniable itch to do what an author’s got to do—but the myth of that night, which has a life of its own.

For example, about three years ago, twenty-five years after the fact, one of the weekly papers in Philadelphia heard a new version of the evening in question and flew a reporter to Seattle with the idea of going through the details with the author all over again.

The author was just finishing his seventh novel—we’re talking about writing, not reading—and for unknown reasons concluded that the request for such an early interview was a signal that he had finally written a book that was exactly right, and he vividly remembers the feeling—dead bats dropping off the walls of his stomach into a river of bile—as he realized that what the reporter wanted to talk about wasn’t the new book but a twenty-five-year- old street brawl the author had been trying to live down ever since it happened.

Which we suppose could be how the eventual subject of this essay, Chuck Knoblauch, feels when somebody comes poking around to ask about some night he, too, would prefer to forget. The difference being that Knoblauch has the good sense not to talk to any of them—or at least not talk to the author, who should have seen it coming, having gone through several hundred pages of material to write a sensitive appreciation of the psychological abnormality that affected him (known variously as Steve Blass Disease, Steve Sax Disease, and Chuck Knoblauch Syndrome, among other things)—and in all those pages found only one true- sounding, consequential remark by Knoblauch over the last dozen years: Don’t tell anybody where I live. 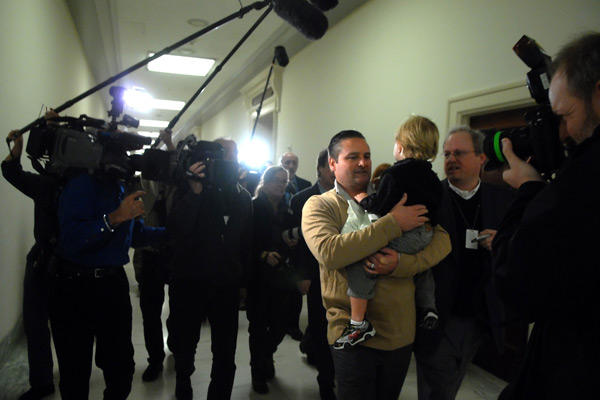 So the author came to this exercise suspecting he was not in friendly territory and that there was an excellent chance Chuck Knoblauch didn’t care if he appreciated his syndrome or not. That it was possible Knoblauch had had as much appreciation as he could stand.

Still, the author wanted to be part of this book and felt like he had something to contribute. Meaning that even if his insight into the game was a slim volume indeed, he did, as it happens, know quite a bit about fucking the rooster. So apologies to Mr. Knoblauch for the intrusion, but we are who we are and we do what we do. Ask Jonesy.

“The Errors of Our Ways” is from “Damn Yankees: Twenty-Four Major-League Writers on the World’s Most Loved (and Hated) Team,” edited by Rob Fleder, and published by Harper Collins/Ecco.

Fucked the rooster. Too good.

Yeah man, I loved that line too.

I can't be the only person who checked out the BB today and screamed in their head within a nanosecond, "Pick up the @#$#@$@#$ ball!"

He could have been throwing the ball with his feet for all I care. 4 years in New York, 4 World Series, 3 wins. His woes were incredibly public but advanced defensive stats show he was no worse than Jeter or Bernie out there even with the odd duck beaning Keith Olbermann's mom in the stands. It may look bad to miss 4 foot putts but you have to have a strong iron game to even be in that position.

I felt horrible for Knobie's throwing troubles. Remember, though, he made that great play in the 8th inning of Coney's perfecto?

And no matter how bad things got in the field he was always a pain in the ass at bat. Good offensive player.

[5] He was a good base runner too. 112 SB, 37 CS in the Bronx. He worst year baserunning was also his worst year with the throwing yips so maybe there was just something wrong with his focus. He grabbed 19 steals in 22 attempts in his last year in KC so he was still pretty sharp in a lot of ways when he left the game. Pete Rose ran into an out 43% of the time when he tried stealing a base but that's being a gritty gamer. Throwing outs away as Knoblauch did gets you labeled an all-time head case.

With Knoblauch, the good outweighs the bad, by far. He was a huge part of those teams' success.

A nest of shit in it's pants. A nest of bees in your beard? I liked Knoblauch a lot, and his throwing yips were supportive in a way for that softball game we all play sometimes.

He is a well remembered Yankee, a winner.

Yeah, seemed like a mixed up guy. He was on the juice which doesn't help his legacy in some quarters and he was arrested for a domestic dispute with his wife, too. I can't imagine they love him in Minnie, either, though his "deke" of Lonnie Smith in the '91 Series is famous.

Omg, the Picasso image to illustrate "fucked the rooster" is fucking inspired.

And the image itself, of course. Of all possible images of roosters, that's the perfect one.