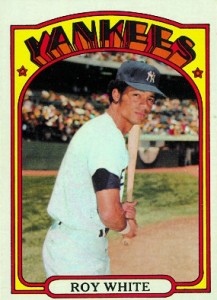 At times the photographers at Topps have depicted a player just about right. Roy White’s 1972 Topps card is a good example of that; we see White practicing his in-game batting stance, holding his hands much lower than most players do, toward his back hip. All that’s missing is the inclusion of White’s feet. With a larger photograph, Topps would have been able to show his pigeon-toed posture, another classic feature of White’s unique batting stance.

White’s card also gives us a good look at the Yankees’ old-school road uniforms, which they used through the 1972 season. They’re you’re basic road gray, with no piping or striping around the sleeve. I’ve always preferred this most simplistic of road uniforms, partly because it’s iconic and partly because it brings back memories of the Mantle/Maris Yankees of the early 1960s.

All in all, this is a quality card for a quality player. In recalling the Yankees of the early 1970s, fans of that era glorified three players: star catcher Thurman Munson, All-Star outfielder Bobby Murcer and the team’s pitching ace, Mel Stottlemyre. Roy White was rarely held in similarly high regard by either the fans or the media. He was generally considered a good, solid player, but not a star, with the one flaw in his game (a poor throwing arm) sometimes becoming the subject of contempt, ridicule, and cruel humor.

The perception of White has changed–and changed drastically–since then. Largely due to Sabermetrics, both Yankee fans and non-Yankee fans have changed their tune with towards White‘s abilities. Or in some cases, it’s simply a matter of a younger generation of fans having a better understanding of players’ quality than we did in the sixties and seventies. White’s ability to draw walks, which was rarely highlighted in the early seventies, has now been given its full due; we better understand and appreciate White’s ability to reach base, and the important role it played in setting the table for other Yankee hitters. And then there is the matter of White’s defense. He was truly an excellent defensive left fielder, with enough speed and range to have played center, if not for Murcer’s presence there through the middle of the 1974 season. Yes, the throwing arm would have been a problem, but probably not anymore so than the weak arms of Mickey Rivers or a late-career Bernie Williams.

Some might argue that the tendency to underrate White in his day was also a product of racism. I have my doubts that was the case. Elston Howard, the Yankees’ first African American player, was popular with fans and held in high regard by almost all of the New York media. Chris Chambliss, Willie Randolph, and Mickey Rivers were all popular Yankees. And fans were just about as supportive as they could be of the controversial Reggie Jackson. When Reggie produced, the fans howled their approval with booming chants of “REG-GIE,REG-GIE” resonating though the upper decks of the old Yankee Stadium. Now Billy Martin might have been a different story; some of his dislike for Reggie might have been rooted in racism, but I don’t know for sure. But I just don’t see much evidence for racial antipathy, not from Martin or anyone else, toward a quiet and hard-working player like Roy White.

By 1972, the switch-hitting White had established himself as a very good player. Though underrated, he had already made two All-Star teams and had earned some MVP votes in three different seasons.  He was coming off a season in which he had led the American League in sacrifice flies, an unglamorous statistic to say the least, but one that showed his team-oriented nature.

In 1972, White’s power production fell off, as his OPS dipped from .857 to .760, his worst mark as the Yankees’ regular left fielder. Still, he managed to make some favorable contributions like lead the American League with 99 walks and steal 23 bases in 30 attempts, all while playing his usually sterling defense in the outfield. The following two seasons, he struggled, leading some to question whether he was on the downhill side at age 30. In the midst of the 1974 season, manager Bill Virdon made him a DH part of the time, a role that White abhorred, considering it an insult to his athletic talents.

In 1975, White’s career received a revival when the Yankees made a managerial switch, firing the placid, detached Virdon, and replacing him with Martin, who appreciated players of all-round ability like the speedy White. Martin put White back in left field and restored him to the No. 2 spot in the batting order. White bounced back beautifully, playing for White the way that he had once played for Ralph Houk.  In 1976, White led the American League with 104 runs scored and reached a career high with 31 stolen bases, becoming a huge part of the first Yankee team to reach the postseason since the ill-fated World Series of 1964.

In the meantime, White became known as a beacon of calm and kindness in a clubhouse that often swirled in turmoil. As Sparky Lyle wrote in his critically acclaimed book, The Bronx Zoo, everybody on the Yankees liked White. “Roy White is probably the nicest goddam guy on the club,” Lyle wrote in his blunt-force style. “He’s well respected by everybody, and he’s very classy.” Classy. The perfect word to describe the gentlemanly Roy White.

By 1978, the year that Lyle’s book hit the shelves, White’s on-field ability had slowed to the point of becoming a part-time player. No longer the everyday left fielder, he platooned with Lou Piniella and also made 23 appearances as a designated hitter, a role that he was now better equipped to handle. With the Yankees having extreme depth in the outfield, they could afford to use White more sparingly, a role into which he fit perfectly. Still able to reach base 35 per cent of the time, White became part of a squadron of role players that supported the Yankees’ stars during their second consecutive world championship run. He played some of his best ball of the season in the playoffs and World Series, hitting over .300 against both the Royals and Dodgers.

Then came the falloff of 1979. Spring training started poorly, as the Yankees refused to offer him an extension on a contract that had just one year remaining. The lack of an extension might have contributed to White’s nightmarish season. Appearing in only 81 games, White played poorly, his power and speed showing the decline that often comes with having a 35-year-old body. Free agency could not have come at a worse possible time. White wanted to keep playing, but the Yankees, looking to rebuild with youth after a season of tragedy and tumult, showed little interest. White received some offers from other teams, but he opted for a completely different career move. He took his aging talents to the Tokyo Giants of the Japanese Leagues, where he became a teammate of Sadaharu Oh.

Batting as the cleanup man behind Oh, White played very well in his first two seasons in Japan. He made the All-Star team one season and helped the Giants to the Japanese Leagues championship the next. In his third year with Tokyo, White found himself playing a utility role, but he fought his way back into the lineup and hit .330 the rest of the way. At season’s end, White decided to call it quits, leaving the game on a high note.

Since his playing days, White has returned to the Yankee organization several times, serving as the first base coach on three occasions and also putting in some time as an assistant to the general manager. In that latter role, he scouted Hideki Matsui during his time in Japan, giving the Yankees his first-hand assessment of a Far East player that they would eventually sign.

Unfortunately, every one of White’s coaching and front office assignments with the Yankees has ended with him being ousted, often with no reason given. I don’t know why that is. He seems like the kind of guy who should have a permanent place in the organization, whether as a scout or as a consultant. It’s almost as if the Yankee organization still doesn’t have a full appreciation for him, just as most of us fans failed to respect him at the time for the player that he truly was.

And that’s just not right. Roy White belongs with the Yankees. If he wants to work for them,  the Yankees should be able to find a place.

Great story, Bruce. You brought back some fond memories. I remember the White days and I was a fan. I also have that card and many of the series with the garishly ugly 70's type, an unfortunate legacy of Peter Max.

By the way, there's a guy in Cooperstown who has a license plate that says "Boyzilla." Just had to let you know.