A friend recommended this book to me. I read it last month. It is beautiful. 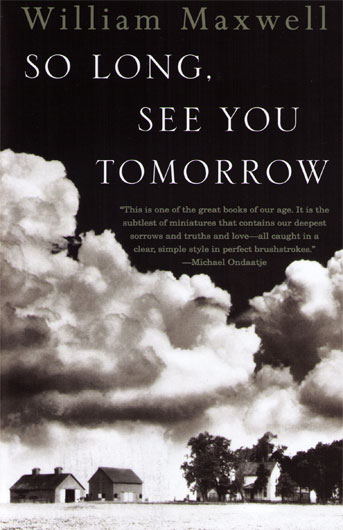 At the suggestion of a colleague, I picked up William Maxwell’s “So Long, See You Tomorrow,” which first appeared in The New Yorker in two parts in 1979, and for me, falls into that category one semi-secretly curates: Books I Really Ought To Have Read Already. But no matter; now seems as good a time as any for a novel about nostalgia. Maxwell’s narrator—who is sometimes thought to be a shade of the author himself—remembers a moment in his youth, following the death of his mother, when he “had inadvertently walked through a door that I shouldn’t have gone through and couldn’t get back to the place I hadn’t meant to leave.” The boy develops a habit of dwelling in the skeleton of the house his father and stepmother are building for their new life, when he discovers “I had found a way to get around the way things were.”

Edward Mendelson wrote in The New York Review of Books that “in Maxwell’s realistic fiction no one learns and no one changes,” and indeed, “So Long, See You Tomorrow” is a study in craving the past, even for characters like the narrator’s forward-looking father, who solves the problem of his first wife’s death with a marriage to someone new. The narrator tells this story just about a half-century after it happens, timing that recalls the forty-year cycle of nostalgia that Adam Gopnik writes about in the magazine this week. The novel is a balm for anyone attracted to the half-soothing, half-sinister sense that everything was better just before it got bad. Without earnestly condemning his own impulses toward glancing backward, the narrator laments that, “Between the way things used to be and the way they were now was a void that couldn’t be crossed.”

Here is the Mendelson article cited above:

William Maxwell was a plain-speaking, seemingly realistic novelist who wrote autobiographical stories about middle-class life in small towns and urban neighborhoods. At first he tried to imitate Virginia Woolf’s lyricism, but he soon cleansed his style of ornament and exaggeration. He wrote in taut, laconic rhythms that evoked the spare speech of his native Midwest, and portrayed his characters’ inner and outer lives with economical clarity and nuance. His props and characters were indistinguishable from real settings and persons from Lincoln, Illinois, where he was born in 1908, and Manhattan, where he lived most of his adult life until his death in 2000. Almost every episode in his fiction was reconstructed from events in his life, rearranged for concision and elegance. In a few heightened moments in his novels and stories, he imagined what the furniture and fixtures in a room might say if they could speak among themselves, unheard by human ears, but he presented these moments as metaphors for the sad reality of human moods.

Maxwell had two separate careers as a writer; both overlapped his third career as fiction editor of The New Yorker. His first career, as a writer of realistic novels and stories, began when his first novel appeared in 1934 and continued in such books as The Château (1961) and So Long, See You Tomorrow (1980). In 1946, a year after he married a young painter, he began a second career as a writer of magical folktales in the style of Mother Goose and the Brothers Grimm. In these tales the magic hidden beneath the surface of his realistic fiction emerges with explicit and often comic force, and their world is partly the familiar modern one, partly a timeless fairyland, and wholly his own invention.

Agreed. Maxwell is one of the best. All his books are worth your time--I particularly like his collection of short stories and his family memoir, Ancestors, which includes the most thoughtful, moving, and heartbreaking analysis how a younger person can be so wrapped up in themselves as to not really even notice adult kindness (let along adult need) that I've ever come across.

The recently published collection of his letters to and from Eudora Welty is also a gem.