Observations From Cooperstown: Memories of Moose 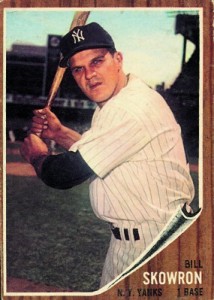 Moose Skowron looked like a character out of “Moon Mullins.” Or in a more contemporary sense, he had the appearance of a secondary character in “The Simpsons.” With his lantern jaw, thick jowls, and military crew cut, he possessed the look of a man who could put his fist through your chest and pull your heart out.

Appearances are often deceiving, and they were exactly that with Skowron, who died at 81 on Friday after a battle with lung cancer. Oh, he could be gruff and curt on the outside, but once you opened a conversation with him, you discovered a down-to-earth guy who enjoyed telling stories from his days with the Yankees. And when you’ve played with characters like Mickey Mantle, Hank Bauer, Yogi Berra, and Whitey Ford, or managed for one-of-a-kind legends like Casey Stengel, you’ve got good material to work with.

There were other deceptions with Skowron. Like many fans, I always assumed that Skowron’s nickname came from his size, his power, and his brute physical strength. He was six feet, two inches, 200 pounds, with much of frame wrapped in muscle. Well, the true origins of his nickname had nothing to do with his physical dimensions. When Skowron was a boy, his grandfather gave him an impromptu haircut, which made the youngster look like the Italian dictator, Benito Mussolini. Skowron’s friends called him “Mussolini,” and the family adapted by changing the nickname to “Moose.” By the time he was playing major league ball, everyone was calling him Moose. One of the few exceptions was the Topps Card Company, which always listed him as “Bill Skowron” on his cards.

After signing with the Yankees in 1950, the organization tried him as an outfielder and third baseman, before realizing he lacked the athletic agility needed of those positions. He moved to first base, where he was blocked by players like Johnny Mize and Joe Collins. He finally landed in the Bronx in 1954, when he platooned with Collins, before becoming an everyday player by the late 1950s.

How good was Skowron in his prime? Well, he was very good. From 1957 to 1961, he averaged 20 home runs a season while qualifying for five consecutive American League All-Star teams. During that stretch, he twice slugged better than .500; he also received some support for American League MVP on two occasions.

As a right-handed power hitter, the old Yankee Stadium was hardly made to order for Skowron. But he adapted, developing a power stroke that targeted right-center and right fields, where the dimensions were far more favorable for hitting the long ball. Skowron’s right-handed hitting presence was importance, given that most of their power hitters hit from the left side (including Roger Maris, Berra and the switch-hitting Mantle.) If opposing teams loaded up on left-handed pitching, Skowron could make them pay.

Skowron really had only two flaws in his game. A classic free swinger and bad ball hitter, Skowron could sometimes hit pitches up his eyes, but he could also flail away at other pitches outside of the strike zone. Since he didn’t walk much, his on-base percentage suffered. Skowron’s other weakness involved his health; he simply could not avoid injuries. One time, he hurt his back while lifting an air conditioner. On another occasion, he tore a muscle in his thigh. There were broken bones, too, including a fractured arm that resulted from an on-field collision. With such injuries forcing him to miss chunks of games at a time, he often played 120 to 130 games a season, instead of the 150 to 160 that he would have preferred.

The 1961 season provided contrasts and quandaries for Skowron. On the down side, his slugging percentage and his on-base percentage fell. More favorably, he hit a personal-best 28 home runs while playing in a career-high 150 games. Batting out of the sixth and seventh hole, Skowron provided protection for the middle-of-the-order thumpers, a group that included Maris, Mantle, and Berra.

As he often did, Skowron elevated his play in the World Series. In the 1961 Classic against the Reds, Yet, it was in the 1961 World Series. In five games against the upstart Reds, Skowron slugged .529 with one home run and five RBIs, reached base 45 per cent of the time, and hit a robust .353. Then again, Moose was almost always good in the Series. In 133 at-bats stretched over eight World Series appearances, Skowron hit eight home runs and slugged .519. In Game Seven situations alone, the Moose hit three home runs. If you believe in the existence of clutch, and I do, then Skowron belongs near the top of that list.

Skowron put up another good season in 1962, but his age and the presence of a young player in the system changed his status within the organization. Believing that Joe Pepitone was headed toward superstardom, the Yankees decided to trade Skowron that winter. They sent him to the Dodgers in exchange for Stan Williams, an intimidating veteran reliever who liked to throw pitches up and in as part of his quest for strikeouts.

In some ways, Skowron could not have been traded to a less ideal situation. Newly built Dodger Stadium, which had replaced the Los Angeles Coliseum as the Dodgers’ home, had a ridiculously high mound and outfield measurements that did not favor sluggers like Skowron. He also had to face a new set of pitchers in the National League; outside of World Series competition, Moose had little familiarity with senior circuit pitching. To make matters worse, Skowron did not play first base every day, instead platooning with Ron Fairly. Moose hit a miserable .203 and ripped only three home runs in well under 300 plate appearances.

To the surprise of many, Skowron still had something left for the World Series. Playing against his former Yankee mates, he swatted a home run and batted .385 to help the Dodgers to a four-game Series sweep.

World Series heroics aside, the Dodgers questioned whether Skowron had much left. So they sold him to the Washington Senators. He hit well during a half-season in the Capital City, but when the team fell out of contention, he was sent packing to the White Sox in a mid-season trade. Skowron hit well over the next season and a half, but slumped badly in 1966 before closing out his career in ’67.

Yet, there was much more to Skowron than on-the-field highlights and accomplishments. He made news off the field, sometimes in frivolous ways and sometimes through embarrassing situations. Let’s consider a couple of episodes from the 1960s:

*During the 1963 season, Skowron and several other Dodgers made a guest appearance on the TV show, “Mr. Ed.” Skowron, catcher John Roseboro, center fielder Willie Davis, and Hall of Fame left-hander Sandy Koufax played themselves. In the main plotline of “Leo Durocher meets Mr. Ed,” the talking horse gives batting tips to Durocher, who was billed as the Dodgers’ manager even though he was actually a coach under Walter Alston. Durocher is supposed to relay the tips to a slumping Skowron. Moose and the other Dodgers then watch in amazement as Mr. Ed completes an inside-the-park home run against Koufax. (In a complete aside, Durocher also appeared on an episode of “The Munsters,” and was once again mentioned as the Dodgers’ skipper. Either Alston wanted nothing to do with Hollywood, or someone was trying to send him the message that Durocher was the real Dodgers manager.)

*While training with the Dodgers in Vero Beach, Florida, he decided to make a surprise trip to see his wife at their home in Hilldale, New Jersey. When he arrived at the house, Skowron found his wife in bed with another man. Infuriated by the surprise discovery, Skowron proceeded to pummel his unwanted guest. Shortly thereafter, Skowron was charged with assault, though many were sympathetic to his situation.

Skowron had better long-term success with other relationships, particularly his fellow Yankees. Beloved in the Yankee clubhouse, Moose became especially close friends with Hank Bauer, a rough-and tumble character in his own right. They often made public appearances together, including numerous visits to Cooperstown for Hall of Fame Weekend signings. I remember meeting Skowron and Bauer back in the late 1980s, while I was still working in sports talk radio. They were signing at a table outside one of the many card shops on Main Street. I wanted to interview the two of them, but I was intimidated by Bauer’s raspy voice and Skowron’s rugged appearance. Feeling like a rookie cub reporter, I settled for making a few innocuous remarks to the two ex-Bombers.

It remains one of my regrets. I never did have another chance to interview either Skowron or Bauer. That was a real mistake on my part, losing out on the opportunity to have a real chat with Skowron, one of the game’s great storytellers.

If there is any consolation, some of Skowron’s stories can be found on You Tube, and in the many books that serve as oral histories of the Yankee franchise. This was a guy who was good friends with Mantle and Berra, a guy who knew Whitey Ford, a man who played with Maris, a guy who dealt with the idiosyncrasies of Casey Stengel. Skowron was a man worth listening to, a link to an era that was long ago, but an era that we always want to re-visit.

Moose was a man that we’ll miss. 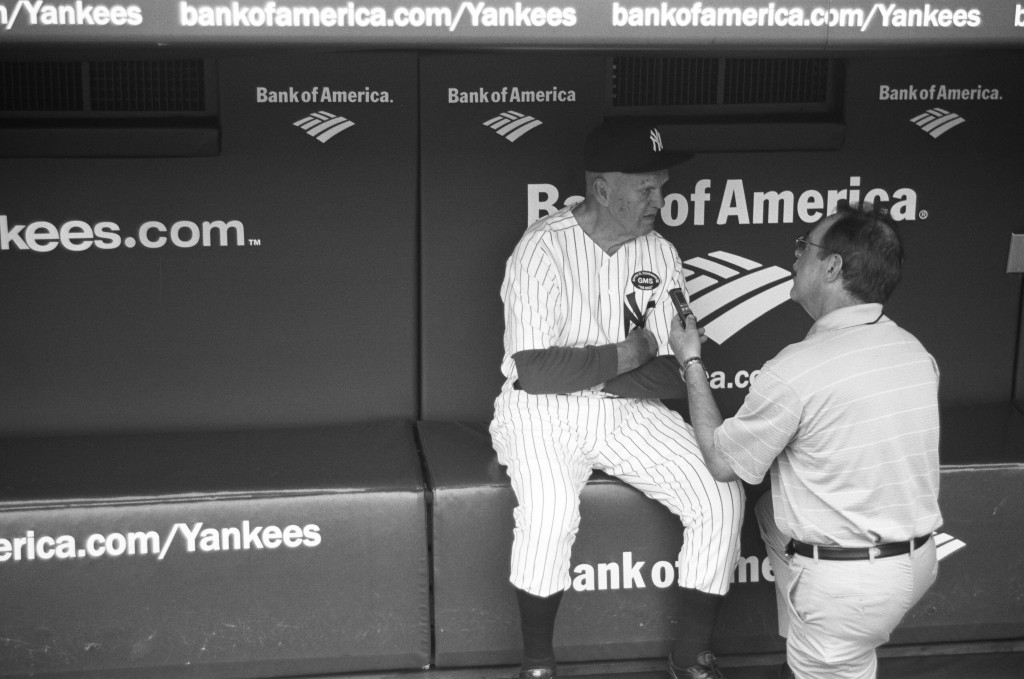 Bruce Markusen is co-author of the newly revised edition of the book, Yankee World Series memories.

[Editor’s Note: Bruce will be on leave for the foreseeable future while he works on a book. We’ll miss his weekly posts and he will drop in occasionally with a Card Corner piece. Meanwhile, we wish him good luck with his project and thank him for being the man.]

good luck with everything, bruce! we'll definitely miss you round these parts and eagerly await your return!

Thanks, thelarmis, much appreciated. As Alex indicated, I still plan on continuing my 1972 Card Corner series, and hope to have an occasional post on other subjects, but just won't be writing weekly posts for awhile because of a book project. If anyone's interested, I hope to post details about the new book in the coming weeks.

In the meantime, I'm expecting a long winning streak from the Yankees, and hope they'll have the division wrapped up by late July.