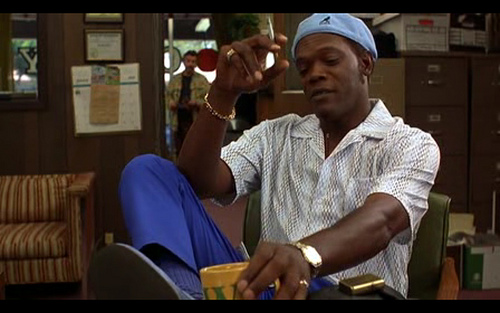 He is on location as much as nine months a year — “I love being on the road,” he said — and the first thing he does in a new town is look for the black community. Sometimes people say, “You’re it.” Sometimes they direct him to black restaurants, music bars or, most important, public golf courses. He plays alone or with strangers. One day in Memphis, he joined a group of 12 black policemen who were about to tee off. One cop said: “Hey, man, you’re Samuel L. Jackson. I like your movies. Now here’s the game. We play for a little something.” Jackson smiled, recalling that game. “Before I know it, I got 16 bets with 12 guys,” he said. “I can’t be thinking, Hey, I’m Samuel L. Jackson. I gotta be thinking of those 16 bets.” (He won 10 of them.)

Jackson told me he has never had an unpleasant experience in public like a lot of actors have who go out in public with bodyguards. “I walk the streets, take the train, it’s real simple. Some actors create their own mythology.” He assumed a self-pitying voice: “Oh, I’m so famous I can’t go places, because I created this mythology that I’m so famous I can’t go places.”

…He goes to theaters where his movies are playing and sits among the audience “to see myself up there.” His “Pulp Fiction” co-star, John Travolta, told me: “Actors go see themselves be someone else because being yourself in real life is not that interesting. I don’t think I’m entertaining.” But Jackson disagreed. “John’s a genuine gentle soul. I love John to death.” Then, speaking in a falsetto, he mocked actors who say, “Oh, I can’t watch myself on screen, it’s too personal.” He dropped the falsetto and began to fulminate like Jules, in ways that can’t be reprinted here. How could anyone expect someone else to pay $12.50 to watch him on screen if he couldn’t watch himself?

I'm just reading through this, and came across this line . . .

"I said that a friend of mine who worked for the Coen brothers told me Jackson was cool mostly to suburban white boys."